Should Zach Braff Be Using Kickstarter?

Today Zach Braff is feeling happy. His crowdsourcing project on Kickstarter reached its goal of raising several million dollars. Some people have been scratching their head at this. Why does he need to be on Kickstarter? He’s not a first time indie director unable to catch a break, or a film-maker unable to secure other funding for an unorthodox project. He’s an established television celebrity with a following of fans. His debut feature co-starred Natalie Portman and Ian Holm among others. His name opens up appearances on talk shows and other avenues of publicity. He can walk into studios and negotiate a contract. Should he be using public crowd-funding to back his film?

Well…sure. He’s entitled to. No rule against it.

On the other hand, it goes against what Kickstarter represents and he should get bent.

Kickstarter, for the uninitiated, is a public website that allows creative and innovative types to solicite donations from the public. To date it has been a massive success that has seen huge numbers of games, books, albums, movies and more go from being dreams to reality. So why are people unhappy with Braff using Kickstarter to fund his new movie?

This little jpg means a dream is real.

Much of it winds back to Braff already having avenues of funding open to him, but also his motivations for using this channel. Even though by the third season of Scrubs, the reason that 99.99% of all people have heard of him, he was no longer the reason why people tuned into the show. His role had been relegated to redoing the ‘World’s Tallest Doctor’ “joke” every episode while John C. McGingly and the guest stars ruled the roost. Braff did prove that he wasn’t a one trick pony with his moody debut Garden State, even though it forced through every indie trope from plugging an up and coming band to including a manic pixie dream girl. His name may not be enough to break the box office but it’s more than enough to get him funding.

He has copped some criticism for his use of Kickstarter already and his response has been…childish. Especially as he has been offered funding by a studio. Given this factoid you have to wonder why he is bothering with the extra effort of Kickstarter. Braff’s explanation is that he didn’t want to compromise on the final cut (although comparing Lucas’s original Star Wars script and the final studio product this isn’t always a bad thing for inexperienced directors). Braff also hated on the studio’s pick of actors, but Braff cast Kate Hudson so what does he know.

But maybe the real reason is about publicity. Scrubs is yesterday’s up and comer, and so is Braff, so getting people talking about the project is essential. He found what everyone else was talking about and did the same thing. Veronica Mars was all over the entertainment headlines when it proved that the fans were still behind the project even after it had exhausted all over avenues of funding. Instead of accepting the several million dollar cheque he’d been offered to make his film he jumped on the bandwagon without grasping what made the Veronica Mars success so noteworthy.

Now back to the matter of childish responses. Some people have used Twitter to call him out on his unnecessary utilisation of Kickstarter. The general gripe is that Kickstarter is for the little guy to try and make his mark, and Braff is in the Hollywood club using it for marketing. It’s not against the rules but it is against the spirit of the thing. Whenever Braff has been met with criticism his response has been to block the critic and claim they were ‘trolling’ him. House of Geekery asked him about this, and got this response: 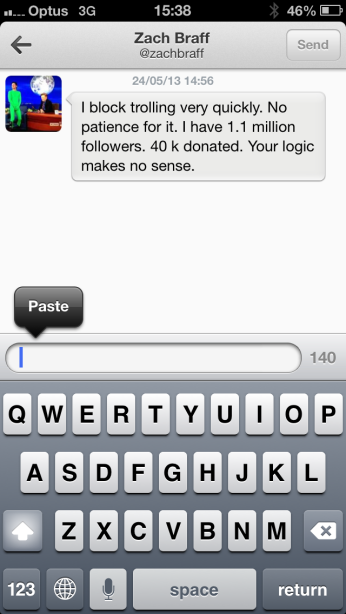 Final word? Yes, Braff can use Kickstarter if he wants. But we reserve the right to call him a douchenozzle for it.

Although his director beard is coming along nicely.

← Why ‘Prison Architect’ is a Game You Should Be Playing
Arrow: Comic to TV Character Guide Part 2 →

6 thoughts on “Should Zach Braff Be Using Kickstarter?”