Game Review: ‘The Last of Us’

Many post-apocalyptic works of fiction have surfaced recently. Whether it is The Walking Dead, World War Z or even comedic endeavors like This is the End. What many, if not all, of these works of fiction have in common is that they all explore humanity or, more specifically, what humanity can become. Are humans worse than what is causing the end of the world? It is almost a cliché at this point.

Now we are given The Last of Us, the new Playstation 3 exclusive from acclaimed developer Naughty Dog. The Last of Us provides some of the clichés that you would perhaps expect from an end of the world type story. But it wraps all of it in such emotional weight and so many nuances and details, in an enveloping sense of melancholy, that instead of feeling tired the game transcends games themselves, and becomes something truly special.

The Last of Us truly shines with its narrative. The story will surprise you despite being familiar in some respects. The surprises stem from the attention to detail and honesty paid to the characters involved. Set two decades after a fungus outbreak that cripples society, Joel is a broken man who is given the task of smuggling a young but brash girl, Ellie, across country. Joel and Ellie are the backbone of the game and what makes it special. It is their interaction and relationship in this world that has long since fallen apart that keeps you invested.

Joel is a haunted man who has nothing to live for except the next day. Joel is a character and role that could have been presented in such a stereotypical way. Instead, he comes alive and will frustrate and conflict your emotions by the time his journey with Ellie comes to a close. However, as interesting as Joel is as a character, it is Ellie who is the standout of the game. She never knew of a world beyond what lies in ruin so experiencing the journey with her, how she flips through records and laments no one can hear them or how she sees an ice cream truck and believes Joel is lying to her when he tells her its purpose, all of it presents Ellie as this wonderful conduit to get lost in the world Naughty Dog created. As ruined and dysfunctual as the world may be, there is still a morbid sense of wonder and beauty to it.

The world could be considered the third main character of this game. Being that 20 years has passed since the world has gone into decay, the once busy cities and highways are now broken and overgrown with plant life and wild animals now freely roam throughout. However, there are also the remains of what once was human life. Throughout Joel and Ellie’s journey, there are numerous instances where you read a note left behind or see an environment and you can put the pieces together to form what once happened where you now stand. More often than not, what happened is disturbing and chilling.

However, the beauty of it all is that none of this is thrown in your face. It is there if you want it, it is there for you to experience if you choose to explore and experience it. That is why I personally recommend people not rush through the game but instead take their time. The game can be beaten in around 10-12 hours but I clocked in at nearly 19-20 simply from exploring and experiencing the world around Joel and Ellie. The Last of Us is an experience that needs to be savored.

As well, The Last of Us is also a game. While the game play of The Last of Us is nothing amazing or spectacular, it does more than enough to keep the player invested and continuing on the journey. Some activities may seem repetitive and sometimes you may find yourself asking the game “why are you making me do this” but you press on because you know the next story bit, the next detail, the next experience will make it all worthwhile. A majority of the game play comes from sneaking or shootouts; the choice is up to the player. However; sneaking is advised due to limited supplies and ammo that are available. Joel can also construct improvised weapons such as shivs, nail bombs and molotov cocktails but has to do so in game. This leaves Joel at constant risk, which maintains the adrenaline and tension fueled moments of the game.

Throughout the world of The Last of Us there are other humans called Hunters who are simply trying to get by and survive like everyone else but do so by killing anyone that crosses their paths. The human enemies possess a weight to them I have never seen before in a game. They are not simple an endless stream of cannon fodder for Joel and Ellie but they are just like you. They plead and beg for their lives when you have them pinned down and their eyes widen and they struggle to fight back anytime you begin to choke them from behind. By the end of the game, you truly feel the weight of every life you have taken.

However there are also the Infected. The Infected come in a few forms, such as basic zombie-like runners but the most notorious and terrifying are the Clickers. Since the infection that crippled society comes from the fungus cordyceps, Clickers are a person who have been infected for a long enough time that the fungus now covers their face and blinds them. So in response, they track their prey like a bat by using clicking sounds and will instantly kill Joel if they get their hands on him. Entering a dark room full of Clickers was always a moment of the game I had to prepare myself for because I knew I would stressing out immensely as I carefully sneaked through. The Runners however are no pushovers either as they attack fiercely with wreck less abandon. They are also perhaps even creepier than the Clickers. The Clickers are so far gone they are unrecognizable, but not Runners. If you enter a room with Runners without them knowing, you hear them moaning, sobbing and wailing, fully aware of the horrible existence they now possess. 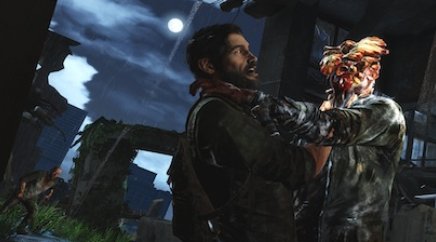 There are numerous other details about the game, such as multiplayer, which is surprisingly good, and the ability to upgrade Joel and his weapons by finding supplements and spare parts, but the most important thing to know about The Last of Us is that it is something you absolutely need to experience. Earlier this year I thought I would be hard-pressed to find a game better than Bioshock Infinite but The Last of Us has gone beyond that and provided what I believe is the best experience available on the Playstation 3, perhaps of this generation period. No game I have played since this generation launched did what The Last of Us did to me. The game compelled me, drained me emotionally, conflicted me morally and left me gasping for air. Not only will you not find a better game this year, but I doubt you will find a better narrative experience period. The Last of Us is a masterpiece.