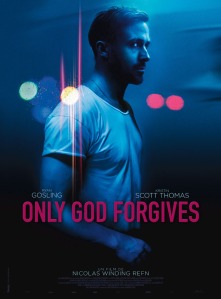 Plot: When his brother is murdered, a gangster hiding out in Bangkok is compelled by his mother to go after the killer, a killer cop nicknamed “Angel of Death.”

Drive was my favorite movie of 2011 and one that I have been clinically obsessed with (if there is such a thing) ever since. So when the filmmaker, Nicolas Winding Refn, teams up with his Drive star, Ryan Gosling, for another flick, I’m going to be there no matter how many Cannes film-goers decide to boo it. But it is important to remember that this is no Drive. Drive with all of its non-conventional pacing and acting is probably the closest thing to a mainstream movie in the 4 flicks that Refn has done since deciding to make dark twisted fairy tales. He brings us down the rabbit hole one more time turning a beautifully shot neon lit Bangkok into his own twisted Wonderland.

I was led to believe this scene would play a bigger part.

This nice reality that he has made for himself comes crumbling on his head when his psychotic brother goes looking for a 14 year old prostitute. When he can’t find one, he reacts badly killing another prostitute. That prostitute’s father than kills him under the guidance of a cop who plays by his own rules, nicknamed “Angel of Death.” He doesn’t dress in  regular uniform, but he does seem to wear the same thing all the time. He carries around a sword that uses to intimidate and than slash his victims like a samurai Punisher. He has more in common with Gosling’s Driver than Gosling’s gangster does. He is a man of few words without a name (rather known primarily by nickname) surrounded by superhero iconography and characterized by a complete inability to socialize. One scene that really stuck out in my mind was during dinner with a bunch of other cops. A bowl of food is pushed towards him, and he just stares at it. He is practically inhuman and is almost omniscient. He is clearly either the “God” of the title or the “devil” of the tagline. The scary thing is in this world, they might be the same thing.

And this is only the beginning. The roof doesn’t really come down until his shitstorm of a mother shows up with all of her Oedipal baggage. With a mother like that, no wonder Julian is so introverted. He is the poster child for the nurture side of “nature vs nurture” argument when your mother happens to be evil. Kristen Scott Thomas as his mother, Crystal, gives an incredibly memorable performance simply for how enthusiastically she bites into every obscene remark. 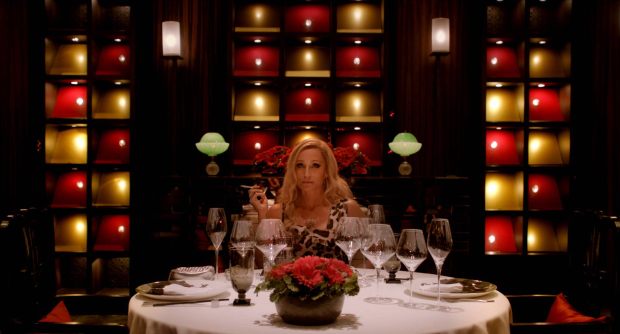 Although, I see why many of the critics have called it slow. It is beyond slow. The beginning is almost torturous, and most of the characters almost look like they are sleep walking or being shot in slow motion. There is nothing wrong with a steady slow burn pacing, but this one definitely tests your patience like never before. I found it only to be really hard to stomach during the exposition of the flick (if you can call it that). Once the ever-escalating eye for an eye revenge thriller starts, the usual enigmatic and mesmerizing Refn trademark comes into full effect.

Despite enjoying this flick well enough and giving it a pretty good rating, I don’t see myself defending and championing this movie quite like I did after Drive.

What Else to Watch: Although the comparison to Drive is inescapable, it has much more in common with Refn’s Valhalla Rising.

One thought on “Movie Review: Only God Forgives”