By Appa the Gypsy

I was a terrible person in June and July and decided to pass my classes at university instead of recommend books to you guys. So I decided you deserve a two part post this time around, because you’re all so lovely and I always get a little kick when I get a notification that one of you lovely people has liked one of my posts. I figure if I do a two part post, then I’ll get more likes… right? RIGHT?!

Sooooooo, those of you who’ve been keeping up with us here at the House over the last month or so will know that our writers based in Perth, Western Australia, had the awesome chance to go to Supanova Perth at the end of June. Some of you will have read about it in G-Funk and Hedgie’s Supanova Perth Convention Roundup post.

There were some amazing stalls, autographs and photos with some well-loved geek legends like Alan Tudyk (you can read about G-Funk’s interview with him here) and Karl Urban (or my personal favourite, Margot Kidder, from Superman), and panels with our famous guests. Cosplayers came out to… cosplay, as you will have seen in the series of posts we’ve done to share the awesome costumes we saw over the Supanova weekend in Perth (or if not, you can check out the four posts here, here, here and here). But, I’m going to level with you guys right now with the shocking (or maybe the not-so-shocking) revelation that my favourite part of Supanova was none of those awesome things.

No. My absolute favourite bit was the authors who came along.

Not only was I given the chance to get books signed for free and meet all these inspiring and dedicated writers, but I got to sit in on panels with them and listen to their thoughts and ideas on everything, from writing characters, to what epic fantasy is, to writing fairytale adaptations, and let me tell you, it was just plain awesome to have the chance to do so.

Now, what’s crazy about this is that I’d only ever read one book by one of the seven authors who were there, and I’d read it ages ago. So I was much less star struck than I was when I met Carrie Fisher, but it was fascinating to hear them all talk about their various books and experiences as writers. So much so, that I spend over a hundred dollars buying their books over the course of the weekend. And that’s more than just an indication of how effective a marketing decision attending conventions is for an author.

So, it’s kind of hard for me to recommend their books, having never read their work, right? I’m not sure. I think there’s something to be said for hearing these people talk about their work, and listening to how they describe what their books are about. So I’m going to recommend them anyway, and then come back later in the year, when I’ll have finished some of their books (here’s hoping), to follow these recommendations up. For the first part of this post, I’m going to discuss three of the authors who were at Supanova, and you can read about the other four in the second part of this post in a few days’ time.

Yep. Raymond E. Feist was at Supanova in Perth. Anyone who knows anything about high fantasy novels should probably have heard of this guy. He’s best known for the epically long, epically detailed series, the Riftwar Cycle. I had him sign the first two books in that series, which I found in our bookshelf a few months ago. My response was something along the lines of HOW LONG HAVE THESE BEEN HERE?!?! The reason for that is that I’ve known about this series for ages now, and, as an avid fantasy reader, I’ve been meaning to read them. To then find out they’ve actually been sitting on a shelf in my home for almost my entire life… Let’s just say, hysterics ensued. 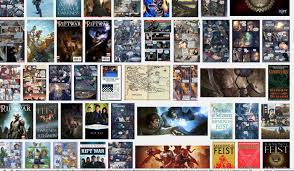 Enough books for you?

But, more importantly, listening to Raymond E. Feist talk about his work has only made me want to read more of it. I avoided the panel he did by himself, speaking about finishing off the Riftwar Saga, and what that’s been like, because I didn’t want to run into any spoilers. The rest of the panels were much more generalised, and it was great listening to him discuss epic fantasy with several other authors, and to hear about him talk about how the Riftwar Saga came to be. Like many of the most famous high fantasy series, Riftwar originated in a roleplaying game. The author and his friends wanted to know what would happen if certain circumstances occurred in the world they played in.

Before I move on to listing his books, here’s a summary of the first book in the Riftwar Saga, Magician, taken from Raymond E. Feist’s official webpage:

“At Crydee, a frontier outpost in the tranquil Kingdom of the Isles, an orphan boy, Pug, is apprenticed to a master magician – and the destinies of two worlds are changed forever. Suddenly the peace of the Kingdom is destroyed as mysterious alien invaders swarm through the land. Pug is swept up into conflict but for him and his warrior friend, Tomas, an Odyssey into the unknown has only just begun. Pug’s destiny is to lead him through a rift in the fabric of space and time to the mastery of the unimaginable powers of a strange new magic …” 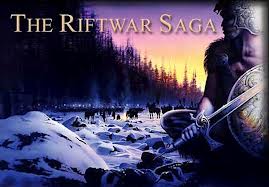 Now, Feist has written other books, but he is best known for the massive Riftwar saga, the final book of which was published earlier this year. So I’m providing you with a publication order of that series, which is said to be the recommended reading order. It’s the order I’ll be reading in when I get there, though, and that’s what’s important, isn’t it? Of course. But if you’re looking for more info on recommended readings orders, Feist’s website has some different suggested options, so I’d suggest having a look here if you’re interested. But the point is… I am super keen to read this series!

I’ve only ever read one book by Juliet Marillier, which was Wildwood Dancing. I read it ages ago and loved it. It was a funny moment when she was at a panel discussing fairytale retellings, and mentioned that Wildwood Dancing was based on the old fairytale, “The Shoes That Were Danced to Pieces”, also known as “Twelve Dancing Princesses”, and suddenly it all clicked. Of course it was! I just hadn’t realized at the time.

It was fascinating listening to her discuss her books, and writing as a craft. I’m definitely excited to check out one book she mentioned, which is a retelling of “Beauty and the Beast”. The book is called Heart’s Blood, and is about a young girl who flees her abusive home and finds a safe haven in a cursed, derelict fortress. She meets a young man there, whose appearance is afflicted by suffering a stroke. The happy ending here is a lot less Disney in that the beast magically becomes a handsome prince, but more that these two people find love and comfort with each other, despite their difficult pasts. Hearing Juliet discussing the novel, and her love for the original tale was inspiring and enticing, and I’ll definitely be reading this one when I can get my hands on it.

Although she was born in New Zealand, Juliet Marillier lives in Western Australia, so it was a much shorter trip for her than some of the other authors who came along to Supanova. That said, she was no less appreciated. She’s a well-known author, and her books are everywhere in libraries and book shops. If I were richer, I’d own all her books, simply because the covers of her novels are absolutely gorgeous. She was fascinating to listen to in the panels, and hearing her discuss her craft, you can tell that she is as enthralled by her writing as her readers are when they read it.

Now, Juliet has written extensively for someone who was only first published in 1999. Listening to her discuss her list of works had one of the other authors whistling. Her list of works boasts several series and standalones, as well as shorter works. Most popular for Young Adult readers is Wildwood Dancing, and its sequel, Cybelle’s Secret, and currently, the Sevenwaters Series is populating shelves at bookstores everywhere. Below, I have a list of her works, taken from her webpage, which shows just how extensive her works are, and which books fit into which series.

The books in the Sevenwaters Series

Saga of the Light Isles

3. The Well of Shades

Kylie Chan was, hands down, my favourite of these novelists to listen to. Possibly because the people I was at Supanova with absolutely adored her work, and went to speak with her more than once. But she was also hilarious and witty and so glad to see people sharing her work and encouraging people to read. One of my favourite moments was during an Epic Fantasy discussion, the authors were giving detailed and complex answers to a rather complex question regarding world building, and Kylie leaned over to her microphone when it was her turn, and replied “No,” and then sat back again. The author on her other side then complained that she’d stolen his answer, to which she just laughed. She was rather entertaining to listen to and to talk to, when getting books signed. She was so excited to meet her readers and she was loving handing out all the free things she could to us, including a link to her new E-book, which is a prequel to her first novel. 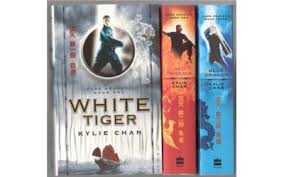 I particularly enjoyed listening to her discuss character and the use of clichés in writing. She explained that she loves to do what is least expected in her writing. So, if her character is a librarian, she does not make the character a middle-aged woman with glasses who shushes people when they cough, but instead makes the character a mischievous twelve year old boy who likes to trick and manipulate people. She seems to be the kind of author who enjoys surprising her readers.

Her work, the Dark Heavens trilogy and its sequel trilogy, Journey to Wudang, are both fantasy series with a twist of Chinese Mythology thrown in. Kylie spent several years living in Hong Kong and researching Chinese Mythology as a basis for her novels, making for an unusual and unique mix of culture within the world of her novels. I’ve listed the novels of the two trilogies currently on the market below, but she’s also written some short stories, one of which is a prequel to Dark Heavens, titled White Fur, Black Scales, and it is available from her website in many different forms. She offers kibble as a reward for those who choose to look into it. Kylie Chan is currently working on the 7th book in the series, which begins a third trilogy for the series. 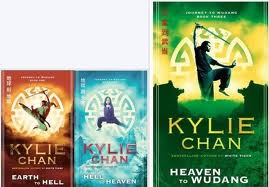 Right, guys. Well, that’s all for now. As you can see, with my plan to read some of these books and review them later in the year, I’m already setting myself an insane task. But, guess what? There’s still more authors to go! So keep an eye out for part two of this post, which will be coming out in a few days’ time. Here’s a painting of some hills to keep you occupied in the meantime…

← One Hit Wonder: Kevin Smith
Lego Simpsons Controversy is the Dumbest Controversy Ever →