In A Hole In The Ground There Lived A Hobbit. Who Collected Scalps.

Maniac. Goddamn what can I say about Maniac. This is truly unlike anything I’ve seen before.  It’s brutal, it’s mesmerising, it’s hard to watch…and it’s impossible to turn away. Granated, it’s not for everyone, but I loved it. 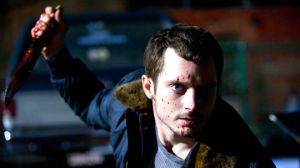 The film follows Frank, a troubled (understatement of the year) young man who tries to live a normal life and meet women online.  Unfortunately, his dark, twisted, and murderous desires take him over and he kills anyone he gets too close to.  Moreover, he takes their scalps and projects his victims onto mannequin dolls he keeps in his home/place of work. When Frank meets Anna, a pretty young photographer who shares his interest in mannequins (although not to the same degree), Frank tries to befriend her and start a relationship, all while hiding his dark side by taking it out on other victims.

It’s not much of a plot, and we’ve had the bad-guy-changing-his-ways storyline before, however this film is about Frank.  We’re following HIM, and fortunately not a twisting and confusing storyline.

The characters were a little weak, but then again other than Frank, none of them were really important. Anna I guess you could say was one of the most important elements of the film but there wasn’t much to her. You can see why Frank falls for her.  She’s pretty, she’s kind, she’s friendly, and she’s the first woman not to see Frank’s hobby as weird.  Ultimately,  I would’ve liked more scenes between Frank and Anna, but what I received was enjoyable. 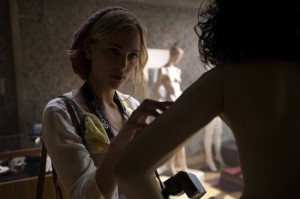 Again however, this film belongs to Elijah Wood as Frank, the titular maniac. I don’t know where to begin with Frank.  He’s not only the centre-piece of the movie, he IS the damn movie. Wood gives a truly outstanding performance of a man on the edge, a man that will rip your head open, yet you feel sorry for him having to do it. You don’t know whether to feel sorry for Frank or fear him.  He has moments of regret where he blames an unseen force for his murderous obsession and there’s flashbacks to him as a child watching his junkie whore of a mother getting fucked – most likely the catalyst for his voyeuristic nature.  Frank appears like a normal man and that’s what makes him so fucking terrifying.  He looks and appears normal.  until you get closer and realise how dangerous he is. The fact that Wood can bring the disgustingly violent nature of this animal to the forefront but still have us sympathise and feel sorry for him, is no mean feat. It’s an incredible performance and one that makes this film so damn great. 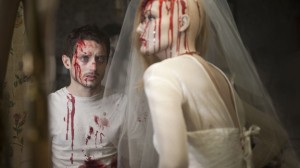 The first and most obvious note for the direction, is that the film is shot nearly all in P.O.V.  Virtually everything is through Frank’s eyes meaning we very rarely see his face, at least not without a reflective surface. It’s an odd aesthetic choice but it works.  For a film that gets this close, this intimate towards its lead character, a villain in his own right, what better way to get in his head than to actually go INTO his head? Add in the film’s voyeuristic themes and the P.O.V. makes sense, it keeps the film within its own confines and makes the more brutal elements all the harder to watch.

That’s another thing about this film, it is brutal and bloody as fuck and the close-up and personal nature of it all just makes it all the more difficult to watch.  The scalpings were bad enough – including one particularly nasty one, you’ll know when you see it and it made me wince – but there was also evisceration, cleavers to heads, strangulations, and ankle cutting.  It’s not the bloodiest or goriest I’ve seen, but probably the most brutal.

Yet despite the twisted nature of the violence the film looks incredible.  It’s got a sleek yet gritty look, mixing the rough violent nature with it’s smooth calm outer layer, much like Frank himself.  The city also hides its true self and it’s only when Frank comes out, that that fear and disgusting nature is unleashed.

One more thing I want to mention is the score.   It’s very electronic and ethereal, suitably creepy for the film and works perfectly in sync with Frank’s broken psychology.  The score possesses a nightmarish feel that you experience when it kicks in.  It gives you chills, but still fits in with Frank’s quest to find love, resulting in an odd mix that’s a marriage made in heaven, or hell.

One hauntingly beautiful track called “Juno” sticks out for me especially.

Maniac  I find hard to recommend because of its stylish approach.  The constant P.O.V. camera and horrifying brutality will turn people off.  But if you get the chance check it out.  It’s a unique film unlike anything you’ve seen before and Elijah Wood’s sympathetically damaged performance is worth the price alone. Highly recommended but strong stomach required.