‘Doctor Who’ Review: ‘The Day of the Doctor’

After endless amounts of hype, speculation, merchandise and misinformation it has finally arrived – the 50th Anniversary Special episode of Doctor Who. Broadcast 50 years to the day as the pilot episode, An Unearthly Child, appeared on BBC the episode was watched by millions of fans worldwide with the promise to reveal more about the Doctor than ever before.

Although Day of the Doctor was promising big events it surprisingly forgoes the major villains of the series to focus on character development. As indicated by the mini-episodes that preceded the broadcast this story takes place during the legendary Time War, which has oft been referenced but never revealed. What we knew going in is that a devastating war between the Time Lords and the Daleks threatened to engulf the entire universe. It fell to the Doctor to take the most drastic action – destroying his home world and his people (plus the Daleks) along with it. An unseen Doctor, played by John Hurt, was the one who was responsible for this action.

This episode begins with the Eleventh Doctor, along with Clara, being summoned by UNIT to the National Gallery where they have a message from Elizabeth I. They observe a 3D image of the fall of Gallifrey and discover that the shape-shifting Zygons have begun infiltrating the human world. The Tenth Doctor also encounters the Zygons whilst inadvertently becoming engaged to Elizabeth I. A tear in time brings the Tenth and Eleventh together, along with the War Doctor. The three versions of the Doctor find themselves on the last day of the Time War, when the weapon that destroys Gallifrey needs to be activated.

The central crux of the conflict revolves around the Doctor having to come to terms with the genocide he caused, and has been carrying the guilt off for hundreds of years. Between the three of them they begin to form a plot that would preserve the people of Gallifrey while destroying the Daleks, but they would not know if they succeeded or not. No punches are pulled, with the Doctor keeping count of all the children he murdered in the destruction of Gallifrey, and the usually affable Eleventh and Tenth resigning themselves to the task.

Fortunately things end on a warm note, with the surprising appearance of all versions of the Doctor to aid in the task – including a glimpse of Peter Capaldi as the next incarnation. The final scene features an even more surprising cameo which, rather than being a gimmick, brings things nicely full circle and is a great tribute for fans. The banter between the three Doctor is certainly the high point of the episode, as is often the case when the Doctors get together. 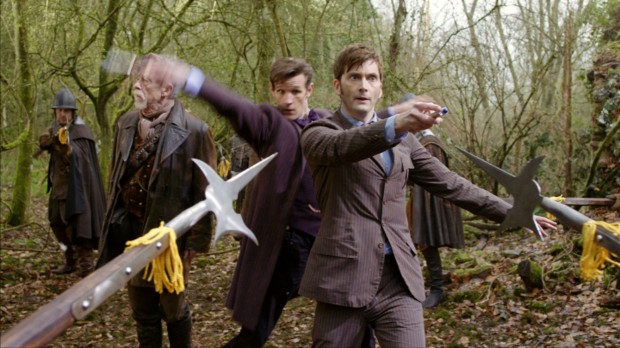 It’s a poignant episode for the Doctor with a nicely handled character arc for the long established icon. By the end of the story the Doctor has been reinforced in our minds as a great character, not the one who committed genocide to end a war, and that’s the war we want it. He’s still the charming eccentric we love. Great episode.