For a while it seemed as though the biggest problem in the establishing of a DC Cinematic Universe to compete with Marvel was what to do with Green Lantern. The Emerald Ring Slinger was brought to cinematic life with less than stellar results in 2011. Since then there has been debate as to what direction to take or if Hal Jordan should take the lead or if John Stewart has earned the right to star in the picture. Eventually the seemingly right solution was reached by announcing the next installment in the Green Lantern franchise would be about the entire Green Lantern Corps. With an entire universe of Ring Slingers, this would give audiences a space epic like no other, which would demand a cast like no other. So here is my Green Lantern Corps. casting call.

Hal Jordan: Nathan Fillion– Say what you will about Ryan Reynolds’ turn as the brash fighter pilot ruining the future of the franchise, but Hal Jordan is synonymous with the Green Lantern mythos and needs to be associated with any GL project that makes it to screen. Since Reynolds is unlikely to put the animated green suit back on, it is time to find a new Jordan. Naturally the perfect replacement would be Serenity star, Nathan Fillion, the actor many felt should have had the role to begin with. Not only does he have action chops, but he has the charm and charisma to get away with Jordan’s cocky behavior. In a film about the entire Corps, Jordan would naturally take on a leadership role and Fillion is best known for playing the captain of a rag-tag group of misfits, so a group of space cops should be easy.

John Stewart: Mekhi Phifer- To say that a sizable chunk of fandom wants to see the former Marine, John Stewart on the big screen is an understatement. Since being reintroduced to fandom a’ la the Justice League animated series, Stewart has been a fan-favorite. Countering Hal Jordan’s brash attitude, Stewart is a straight laced by the book lawman, who is stern and upright. In the Torchwood saga Miracle Day, but Mehki Phifer’s performance was perfect as a straight laced G-Man who mixed it up with extraterrestrial elements. He approached every crisis with confidence and a levelhead needed to solve the problem. If this does not convince you to slap a green ring on his finger I don’t know what will.

Guy Gardner: Sean William Scott-He’s obnoxious, he’s a loudmouth, he’s the most controversial Green Lantern to come from Sector 2814. In order to nail this GL who is nothing short of a jerk, requires an actor who has the charm to play a jerk yet still entertain the audience. In the American Pie franchise, Sean William Scott stole the show in every film by being, crude, self-absorbed, and sleazy. If he can make a character like Stifler into a fan favorite imagine what he can do playing a character with an already established fanbase. 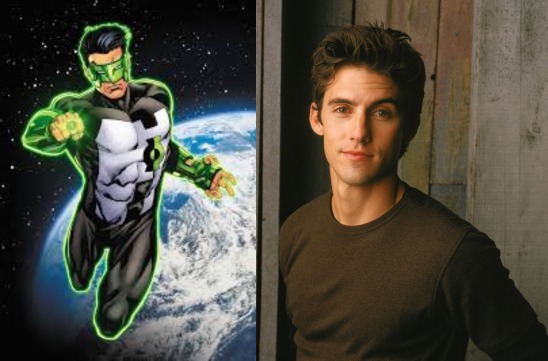 Kyle Rayner: Milo Ventimiglia-The appeal of Kyle Rayner is the fact that unlike Jordan or Stewart or the others, he was never meant to be a Green Lantern. Rayner ended up with a ring out of necessity after Jordan was possessed by the Parallax being, and he has enjoyed a cult following because of it. Because of his youth and inexperience he would be the perfect stand in for the audience in the upcoming Green Lantern Corps. movie. In the TV series, Heroes, Milo Ventimiglia played a man who stumbles upon his super powers and he utilizes them with a very human sensibility. Ventimiglia would be a great balance to the operatic bravado of a Green Lantern flick.

Jessica Cruz: Michelle Rodriguez-The newest Emeral Ring slinger in the pages of DC Comics, is Jessica Cruz. She ended up with an equivalent Lantern ring from Earth 3 following the cataclysmic events of Forever Evil, and is currently struggling to hone her new found abilities. Given that she was created by Geoff Johns, the head honcho of DC’s multi-media presence its a fair bet she will play a role in this upcoming picture. Michelle Rodriguez, is an actress who has no problem throwing down for big action pieces yet is still capable of showing a sense of vulnerability when the time calls for it. She has been pegged for this role by so many other armchair casting directors, who am I to disagree.

Kilowog: Mickey Rourke- The tragic passing of Michael Clarke Duncan left a hole in the Green Lantern cast in need of filling. Kilowog has long been the experienced tough as nails trainer of the Green Lantern Corps. In a tour de force performance in the Wrestler, character actor Mickey Rourke  perfectly portrayed a grizzled pugnacious man who still retained a warmth and sense of humanity. This character actor has the chops needed to reintroduce this character to cinematic audiences and whip the Poozers into shape.

Salaak: Doug Jones- The Oracle of the Green Lantern Corps. is Salaak a bookish alien who holds the Lanterns together. In order to bring such a bizarre creature to life for the silver screen the use of motion capture will be utilized to achieve what the filmmakers need. With a lanky frame and an incredible understanding how to perform utilizing his physicality, Doug Jones the perfect choice to bring Salaak to the big screen. Watch any of his performances and you will see a man who vanishes into the inhuman characters he plays and gives audiences a performance they never forget.

Sinestro: Mark Strong- One of the things the 2011 Green Lantern film got right was the casting of British actor Mark Strong as the iconic villain, Sinestro. And if it isn’t broke you shouldn’t fix it, as Strong brought the infamous for to life with great charisma as a heroic Lantern. But as anyone familiar with his filmography knows what he excels at as an actor is playing villains, so witnessing the sctor finally embrace Sinestro’s ultimate destiny would be something to behold. Strong made no secret his love of the character, even penning a letter to Geoff Johns on his final issue of the Green Lantern comic.

Star Sapphire: Katie McGrath- The love of Hal Jordan’s life, Carol Ferris, is also one of his greatest enemies, Star Sapphire. Blake Lively’s performance in the 2011 flick left a lot to be desired. Replacing her is easy as we look no further than the stunning British actress Katie McGrath. Anyone who has caught her in the series Merlin know that McGrath can be equal parts caring and dangerous the perfect balance to portray both Carol Ferris and her alter ego.

Saint Walker: Sir John Hurt- When Geoff Johns introduced a spectrum’s worth of Lanterns during his run on the series, one group of Ring Slingers became fan favorites, the Blue Lantern Corps and their leader Saint Walker. Driven by the force of Hope, Saint Walker is a being of devout faith who seeks to save the universe with an indomitable spirit. With a distinctive voice and an understated yet powerful screen presence, the legendary Sir John Hurt is ideal to bring this fan favorite to life. Whether you know him from Alien or Doctor Who their is no denying his distinctive voice and world weary demeanor would make him perfect for this long suffering hero.

Larfleeze: Frank Oz- Throughout film history, there have been characters brought to life through the skill of puppetry that transcended the material they were made of and connected with the audience. Behind each of these puppets is a gifted artists who are able to infuse their puppet with life. One of the most prolific puppeteers of the past 30 years is Frank Oz, a man who gave us; Miss Piggy, Grover, and of course Yoda. Larfleeze as the sole Orange Lantern would blow audiences away if brought to life via puppetry, and who better to do it than Oz.

Atrocitus: Dave Bautista-The surprise blockbuster hit, Guardians of the Galaxy, proved to mass audiences that “the Animal” Dave Bautista was just as adept in front of a movie camera as he was in a wrestling ring. As Drax, he turned an obscure Marvel hero into a memorable film character by bringing both rage and humanity to the Destroyer. There is no reason he would not be able to bring that same stoicism and attitude to the leader of the violent Red Lantern.