The House of Geekery was set up as a place to review and recommend geeky entertainment and products for like minded people. It is rarely a place for soap boxing. However sometimes an issue has entered the public consciousness and I want to give my two cents.

For the past two years there has been a thread of comedy running through the internet relating to some men’s inability to find a date. Not something one would normally poke fun at, but starting with the now deactivated Nice Guys of OKCupid we’d began to recognise two trend amongst the men in the online dating community. The first thing people noticed was that men who described themselves as ‘nice guys’ would prove to be anything but, questioning why women aren’t making themselves available in response to their self-perceived ‘niceness’. 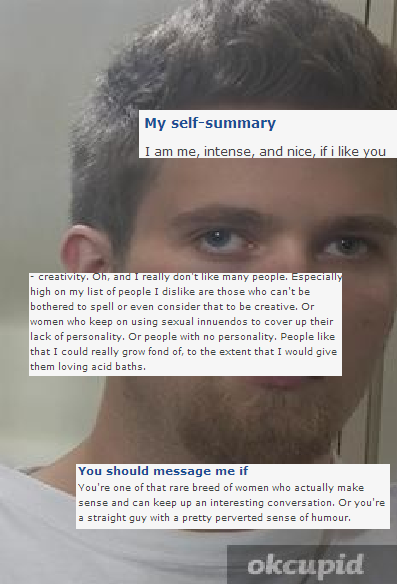 Some of them more terrifying than others.

What proved to be surprising was how much these angry ‘nice’ guys had in common. They all insisted that wearing a fedora hat is their ‘trademark’. They consider themselves to be highly intelligent and self-proclaimed ‘grammar Nazi’s’. Reddit and My Little Pony: Friendship is Magic rate very highly amongst the hobbies. Replica swords come up often. An ‘ethical’ standpoint on atheism  Suddenly we had an entire subcultural stereotype that existed as a punchline for the online dating community. 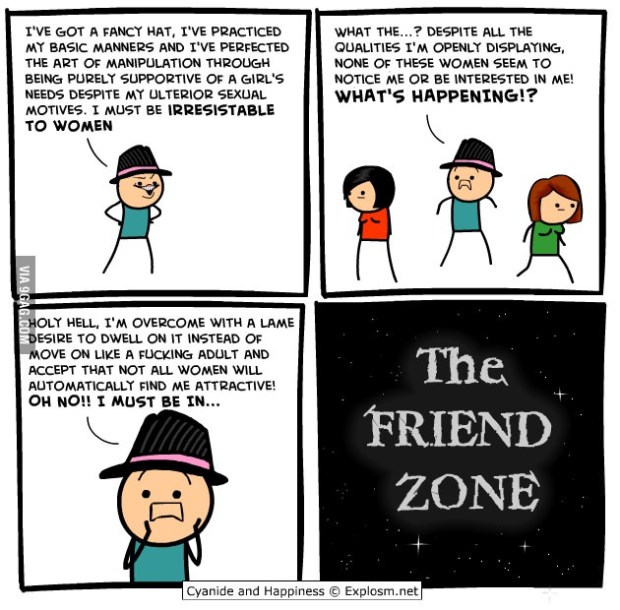 The second thing that people noticed was the attitude. It wasn’t just an expectation that women should be interested in them for their ‘niceness’, but a sense of entitlement. It was their right to obtain a beautiful woman who can see past their social awkwardness, anger and collections of toy ponies and love them for who they believe they are. Reports of online harassment became as common as the jokes about these clowns.

They emerged as the world’s saddest ‘movement’, the Men’s Rights Activists. A bunch of white men between the ages of 16 and 50 who feel as though the world is conspiring against them. Women were frequently given custody of children in spite of their claims that single women make for worse mothers. Women, or ‘sluts’ as they often call them, get lighter jail sentences. Men are the victims of 40% of domestic abuse. 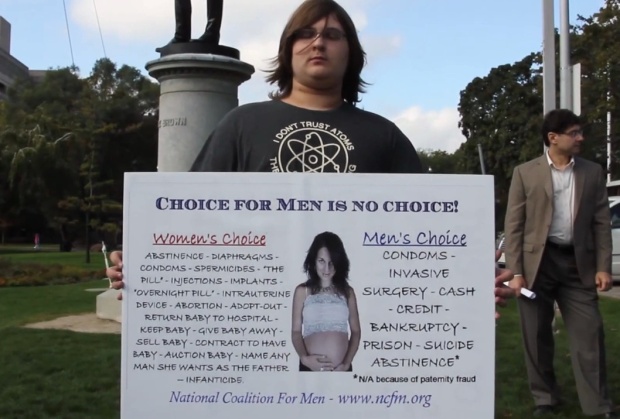 Is this man demanding a uterus?

With their theories about relationships being a sham and becoming a ‘Pick-Up Artist’ as essential, ‘Femnazis’ being evil and the whatnot, they read as the single most deluded activists on the face of the planet. White males in their age group hold almost every major position of power around the globe, and they face more advantages than any other group in history. The very notion that they need someone to fight for their rights os outright laughable.

Before long this wretched piece of crud’s video explanation for his actions surfaced and was seen by millions. He spoke of retribution and revenge for being a virgin, revenge against girls who wouldn’t give him “their sex” in spite of him being the “perfect gentleman”. Something was sounding oddly familiar about this, and the penny just dropped.

As usual the answer is Brad Pitt.

David Fincher’s 1999 cult smash Fight Club is popular amongst internet dwellers. Along with V For Vendetta and The Dark Knight it is frequently quoted, turned into gifs and immortalised in fan art. And as with the other two examples here, most people tend to miss the point.

Rather than an outlet for cool quotes and broad anti-corporate sentiment Fight Club speaks extensively about the modern male identity. The characters talk about what defines them as men, and how this ideal has come about. The scene that comes to mind when viewing the Men’s Rights Murderer’s video features this quote:

We’ve all been raised on television to believe that one day we’d all be millionaires, and movie gods, and rock stars. But we won’t. And we’re slowly learning that fact. And we’re very, very pissed off.

Is this what is going on? Are these men pissed off because they’ve been raised to believe they’re entitled to a significant life with fame, fortune and women? After prowling around some of their forums this past week it certainly seems like it. When you combine the MRA ideology with their self-perception as ‘pick-up artists’ everything reads as though they’re trying to bend women into their worldview – that worldview putting them on a pedestal where their ‘niceness’ earns them a bevy of obedient women. Naturally, women are not accepting of this, and the men are getting angry about it like an angry toddler being refused chocolate for breakfast.

It leads us to consider what in the world has given them this impression, why Tyler Durden had their number. We need to start with John Hughes. Ever since John Hughes revitalised the teen film genre in the 1980s a common trope is the nerd character (or ‘nice guy’) being depicted as a hopeless case with the women. Eventually the love interest would wake up to the fact that their jock boyfriend was an asshole and the nerd was the right guy for them. This wasn’t so black and white in Hughes’ films because he would construct good, complex and believable characters, but subsequent revisions have made it that straight forward. The real down point of this gimmick occurs in Revenge of the Nerds when one of the ‘nerds’ tricks a girl until thinking she was with her boyfriend rather than the nerd in disguise, sleeping with her, and proving that his intellect made his a better lover.

We can’t point of this recurring movie plot and say ‘that’s the answer’, but there’s a very clear parallel. The sense of entitlement, based on forum posts and dating website profiles, is heavily based around the idea that being ‘nice’ will eventually win girls over. On paper it doesn’t sound terrible – maybe it will work out – but with it comes the expectation that the men don’t need to do anything to ‘earn’ this relationship.

Twenty years ago a man in such a situation would likely be left to feel sorry for themselves, perhaps lose themselves in their pre-installed nerd hobbies and attend conventions to argue about Star Trek continuity. But the advent of the internet, and in particular discussion pages such as ‘The Red Pill’, has given them a sounding board for their distorted views. It’s been observed in human society that all it takes for a negative view to prosper is like minded people to get together. Without conflicting opinions and other lonely men to agree with them they begin to feel that they are in the right.

In spite of the current backlash against in these communities, the Men’s Rights Activists are standing firm. Defence for the horrid murderer who couldn’t get a date flooded the internet, with some claiming that this is ‘what happens’ when a guy gets friendzoned. Having the entirety of society highlight them as a problem, and stats proving that women in the Western world are living under threat from such people, has not dissuaded them from their belief that they’re in the right. 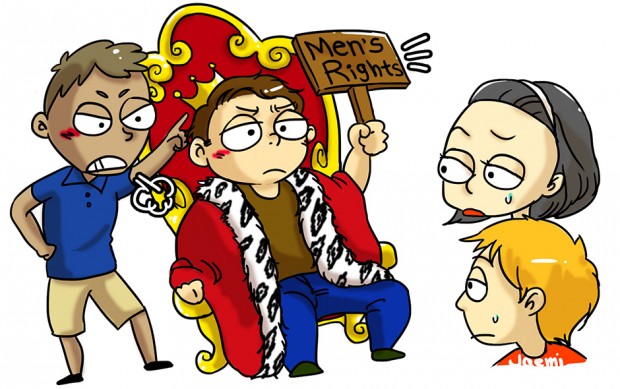 One has to wonder where this is going to lead us as a community. That’s hard to say. People using the #yesallwomen tag have been speaking their mind for a long time, and they’re now fortified int their stance. The opposing side, the men who argue against the feminist movement as a result of their loneliness have become so self entitled they’re not going to fold. We’ve reached a stand-off, and a lot of people are angry about it.

Change comes slowly. The sad men who vent their frustrations on women are not going to wise up, and they’re not going to have their desires fulfilled. We can hope that this at least takes them out of the gene pool. In the meantime it’s frustrating not being able to do anything about it today. There’s a few small things we can do. We can set a good example and raise our own children with the right attitude. When a denizen of the internet threatens a girl with rape or doesn’t take no for an answer we can band together to condemn them, make it clear that this is not tolerated. The attitude of the Santa Barbara shooter should not be tolerated by anyone. 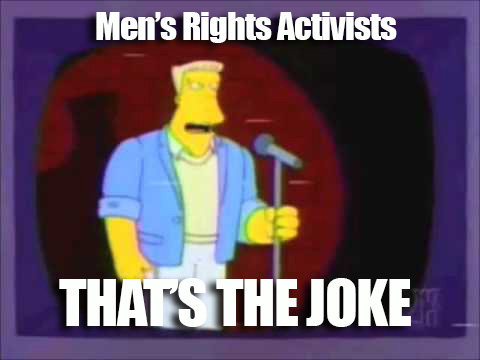 3 thoughts on “Tyler Durden and the Men’s Right Activists”