Keep Calm and Geek On

Passion in life is essential. It drives us, gets us up in the morning, helps us survive our boring or depressing jobs, and enhances our day-to-day existence. The Merriam-Webster dictionary’s first entry for passion is “a strong feeling of enthusiasm or excitement for something or about doing something.”  For us geeks this is a dead-on description of whatever we are enthusiastic about.  Whether it’s Cosplay, comicbooks, “Game of Thrones”, fantasy novels, Batman, or the world of Disney, passion is something that brings us together as a community of geeks.  Our passionate geekiness makes us revel in each other’s obsessions, generate spirited discussions, create lifelong friendships, and in some cases even results in marriages and families.  (No joke I read once about this couple who bonded online over Robert Jordan’s Wheel of Time series.  He lived in America, she lived…in Finland.  Geekiness does conquer all!) Unfortunately there is a darker side to passionate geekiness as well.  Merriam-Webster’s second entry for passion reads, “a strong feeling (such as anger) that causes you to act in a dangerous way.”  This too is also an accurate description of what passionate geekiness can degenerate into.  As fantasy author Terry Goodkind wrote in Blood of the Fold, “passion rules reason, for better or for worse.” With the explosion of the Internet over the last two decades, it’s become a lot easier to communicate with our fellow geeks.  Concurrently, it’s also become a lot easier to snipe at people anonymously, sometimes in vicious, misogynistic, racist, homophobic, and in some instances violent ways.  One only has to look at the hate filled rhetoric following the Elliot Rodger murders out of Isla Vista, California for proof. You know when I write articles I never know where or when inspiration is going to strike.  Sometimes it’s a straightforward objective like a movie review or a suggestion for casting a well-known comicbook character.  And sometimes inspiration just drops on you like the T.A.R.D.I.S. That was the case with the current article before you.

One of my favorite all time novels is Ernest Cline’s Ready Player One.  I’ve read it multiple times and not surprisingly the film was quickly optioned into a movie.  The other day I just happened to be perusing one of the many movie websites I frequent and discovered that Zak Penn will be writing the screenplay for Cline’s novel.  I was through the roof with delight.  The guy helped write X2 and The Avengers, arguably two of the best comicbook films ever made.  To say I was overjoyed was like saying Hill Valley likes saving clocktowers. Imagine my shock when I went on Facebook and found a vitriol laced diatribe slamming Ready Player One.  Among other things they called the book sexist, boring, preachy, socially irrelevant and overly nostalgic, to the point of comparing it to Seth MacFarlane’s “Family Guy.”  I was surprised at how angry the post made me, almost to the point of rage. There are multiple examples to refute the author’s claims–a main character is a black lesbian, another main character is a strong independent woman, the book explores relevant social topics like class warfare and the environment.  Plus the book intertwines intricate 80s and 90s pop culture in inspired and entertaining ways.  Comparing the nostalgia aspects to “Family Guy” is insulting.  His argument came across as uninformed and lacking in merit. It took me a minute to calm down and then I asked myself: Why was I getting so angry?  Who cares what this guy thinks?  Everyone is entitled to their opinion.  It’s not my place to dictate how this guy feels about Ready Player One no more than he’s entitled to dictate my opinion of Batman.  (FYI Batman is awesome.) The whole incident made me question my priorities. I’ve always been about God, family, and friends, typically in that order.  But everyone’s priorities get out of whack from time to time as my situation demonstrated.  However, my experience led to a larger question. Are we as geeks letting our passions get out of control? If you examine the Geekverse at large I’d say the answer is a “yes” that rings like Thor’s hammer striking a gong.  I mean look at the fierce debate over the absence of strong female characters in video games (looking at you Ubisoft), specifically the people who are on the wrong side of THAT argument.   These guys’ diatribes are scary.  Their political affiliations are somewhere to the right of Genghis Khan.  Or look at some of the videos of guys playing tabletop games with inexperienced players.  Even Bruce Banner thinks those guys need to calm down. As simplistic as this sounds, getting this worked up about a geek issue is JUST…NOT…WORTH…IT.  Like my Mom always said, “You gotta pick and choose your battles.”  What?  You’re telling me it’s more important to be right about who the third Robin was than a friendship that’s lasted ten years?  (It’s Tim Drake, but I digress.)  Ridiculous.  Just because someone thinks Jackie Brown is boring or Neuromancer is an overrated novel, doesn’t mean you have the write to bash them verbally or physically.  I don’t mean to sound dismissive, but at the end of the day it’s just a comicbook or a television show or a movie.  Casting Ben Affleck as Batman is not going to give your Dad cancer. 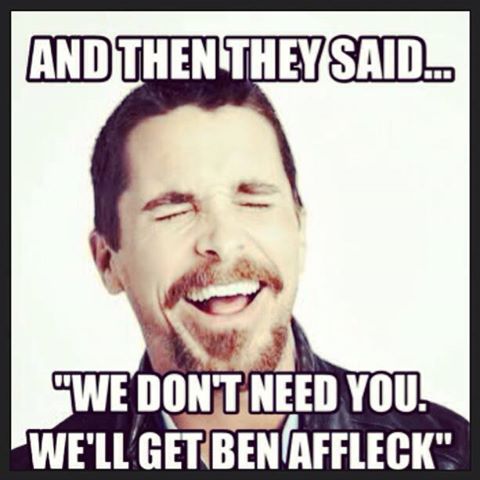 In a few months I’m going to be a Father for the first time.  It would be nice if my son shares some of my geek interests, but I have no idea what he’s going to be passionate about.  If I’m successful I’ll be able to impart some of my love for fantasy, science fiction, and Batman to him.  But regardless, whether he prefers dark matter to The Dark Crystal or basketball to Batman, he’s going to be passionate about something.  I pray that I’m a good enough Father to instill tolerance in him.  I’ll tell him that passion is a good thing but it can also be a dangerous thing.  I’ll tell him passion is empty without COMPASSION as well.  I’ll tell him a valuable life lesson from the words of the great sage Wil Wheaton: “Don’t be a dick.” Fellow geeks I implore you not to let your passions rule you.  If you find  yourself about to lash out when someone posts that Green Lantern is just a guy with a magic ring, take a deep breath, squeeze your Doctor Octopus plush toy and follow the words of this article’s title: Keep calm and geek on.

5 thoughts on “Keep Calm and Geek On”