Review: ‘Risk’ ranks up there with ‘Monopoly’ and ‘Trivial Pursuit’ as one of the best known board games in the world, a family game that has permeated Western family culture so thoroughly that you’d be pressed to find someone who hasn’t at least heard of it. That being said it isn’t one of my childhood favourites, not nearly as fondly remembered at ‘Cluedo’ or ‘Game of Life’. Having a ‘Risk’ set in the house has never been a priority for us.

A Dalek themed copy of Risk, however…

Having seen what a great looking set this Doctor Who themed version of the classic military strategy game was I picked one up, happy to check it out. Rather than a simple reskinning like the lacklustre ‘Doctor Who Monopoly’ this features unique rules and variations on the classic and some downright lovely miniatures of the Dalek armies. The different sized Daleks have two designs across the five colours and they look great, as does the less detailed TARDIS piece that represents the location of the Doctor.

The basic rules for ‘Risk’ are in play. The world map is divided up into dozens of territories that are equally divided between players at the beginning of the game, with a small force placed in each. On each turn the player can chose to move their armies into neighbouring territories and wage war on any opponent players they encounter there. Combat is resolved using dice rolls, with the attacking having more dice but the defender wins tie breakers. At the beginning of every new round players obtain new units, with bonus units based on how much of the map they control, with the player holding the most control at the end of the game being the winner.

Many variations are included and for the most part they contribute good new elements to the game. Best of all is the Doctor himself, who lands the TARDIS in a randomly selected territory and prevents any combat or movement from occurring there for a turn. The traditionally long running game is reigned in by a Regeneration Strip, representing the Doctor’s 11 rebirths. On every turn the companion Clara moves on step down the strip with the game concluding with the 11th regeneration. A random element is thrown into the mix by some of the Regenerations only being triggered by a 50/50 dice roll.

There are also Power and Mission cards. Randomly chosen missions give each player a specific territory to take during the game. It’s optional but completely the task awards the player with extra units. Power cards are a gamble – three are doled out to each player and kept face down, and one can be turned over during a game to either lose the player units or reward some.

All the new elements to the game, and the quality of the units, are all very good. This game does unfortunately have some major balance problems. Really big ones, and due to the instructions being a tad vague and full of typos it’s uncertain whether we’d read them correctly. Most noticeable is the ability to trade ‘stars’ for units. For every territory taken the player scores a Territory Card that has one or two stars on it. Stars can be traded for units, but the amount of Daleks you can collect in a single turn is massively disproportional to the gameplay. For 10 Stars you can collect 30 additional units in one move, more than doubling the amount you have on the board at the beginning of the game.

This results in whichever player is currently in control having a ridiculously large army that can effortless sweep across half the map before being brought to a halt. Then the next player collects their handfuls of Daleks and begins their giant sweep of the map. The game results in the armies snowballing back and forth across the board with the winner being the player who happens to be last to make a move. 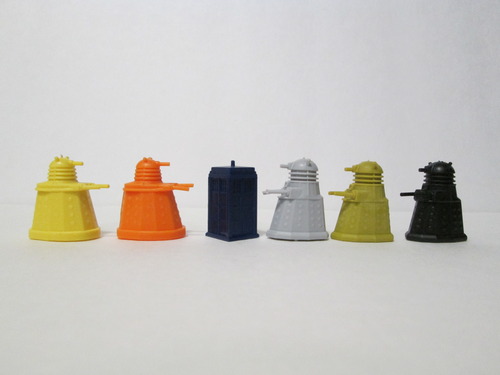 And as much as we love the pieces, some colour variation would be nice.

We strongly recommend that this rule is altered at the beginning of the game. Rather than one territory card per territory taken, take one per successful attack round. This allows players to decide when best to trade in their cards for an extra push instead of the tiresome business of pushing across the board again and again.

In spite of the great design there was an odd decision to put the same illustration on the backs of the Territory, Mission and Power cards, so they are not easily distinguished at a glance. It’s a needling problem that had an easy fix on the production side.