Plot: A Hollywood actor made famous for playing a superhero earlier in his career tries to put on a Broadway show to earn back some credibility.

No, this is not the feature film version of the Hanna-Barbera character but rather a schizophrenic look at Hollywood’s creative bankruptcy symbolized by their current obsession with superhero films.

In one of the coolest meta-casting calls in Hollywood history, Michael Keaton is cast as Riggan Thomson, a once giant Hollywood star made popular through his portrayal of a superhero now trying to take on a more artsy job to prove to everyone that he isn’t just another Hollywood has-been. I don’t think the irony will be wasted on anyone that Keaton was once quite popular thanks in part to his lead role in Tim Burton’s Batman and now misses out on the kind of roles he used to once get. This is what makes Birdman so cool. Keaton knocks the role so far out of the park that it is the kind of career resurrecting role that his character is looking for. That’s great, in my opinion, because I would love to see Keaton do more things.

While Keaton is using an indie Oscar hopeful to mount his comeback, Riggan is writing, directing, and starring in an adaptation of Raymond Carver’s “What We Talk About When We Talk About Love.” It takes place almost exclusively in a Broadway playhouse structured as a single long take (with cuts cleverly masked). This allows director Inarritu to really capture a constant state of anxiety. Sometimes, it comes in the form of opening night jitters, or it is the hustle and bustle of being backstage. There is also the general identity crises the cast of characters have to contend with. For instance, Edward Norton’s Broadway superstar (who is infamously hard to work making it another meta-role) is going through some psychosomatic sexual dysfunctions while Emma Stone’s daughter to Riggan is just getting out of rehab and trying to patch things up with her once-absent and now-distracted father. If that isn’t enough, it is set to a chaotic jazz drum soundtrack that only makes you feel more erratic. 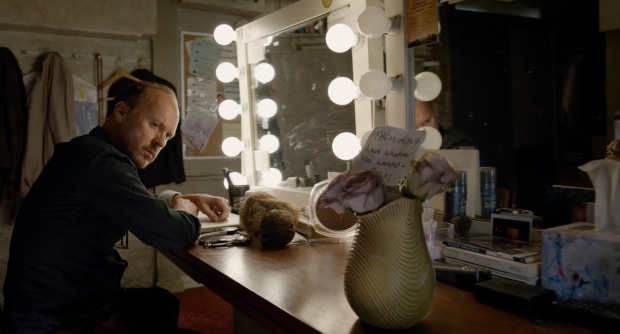 As the movie continues, Riggan becomes more and more unhinged due to stress. The stress shows itself in the form of the disembodied voice of Birdman himself (Keaton doing his own Christian Bale growl) who challenges and taunts the actor until Riggan finally just goes on a full on superhero daydream trip. This schizophrenia extends to the movie as well. As often as it criticizes Hollywood’s superhero fetish (in one funny scene, they run down possible replacement actors all of whom were tied up with superhero-like movies), it also paints the artsy Broadway scene as self-righteous and indignant. It deals in this kind of hypocrisy often implying a greater sense of self-awareness that the importance put on either is probably way less than either care to admit.

Birdman is a classic show business comedy with a contemporary ambition and sense of humor. Michael Keaton is a shoe in for an Oscar this year, and if he doesn’t have some kind of career resurrection after this, I will be sorely disappointed.