Directed by: The Spierig Brothers

Plot:  A young woman is recruited by a time traveling secret agent.

Do not be mistaken by the “man with a gun going toward something so impossible only he could stop it” movie poster. Predestination is not a run and gun kind of movie, another in a long line of modest budget thriller starring a well-known actor (going all the way back to Taken). It is a decade-spanning character piece posing as a slow burn thriller, and it is based on a classic Robert Heinlein short story “-All You Zombies-.” It stars Ethan Hawke as an unnamed temporal agent working for a secret agency who has been circling back and forth through time trying to stop a terrorist. Hawke’s ping-ponging between lead actor and character actor suits him well here turning the same character for all intents and purposes into completely separate characters, varied by time. He reteams with his Daybreakers directors Michael and Peter Spierig. Their genre pedigree allows them to create a beautiful looking and well-conceived time travel continuity resembling an even more knotted version of the Mobius strip while ever so slightly exiting that genre comfort zone with keen questions of identity.

Ethan Hawke is also not in the lead here, despite the poster. That distinction goes to Sarah Snook, a newcomer who gives a career making performance as a character credited only as “The Unmarried Mother,” her advice column pen name. She was an orphan recruited into a training program by the temporal agency under the guise of being the first female astronaut. She was disqualified for medical reasons that were never disclosed to her. Those medical reasons would later be revealed to her after a problematic pregnancy. The doctors discovered she was intersexed and forced a sex change after her uterus was too badly damaged. Snook delivers a full range of emotion in her character’s transition making for a surprisingly compelling performance for a movie of this genre being released during this time of year (a sci-fi VOD release in January? Come on!). She too delivers the kind of performance that fashions two distinct characters out of one by portraying her/him at different moments in time. 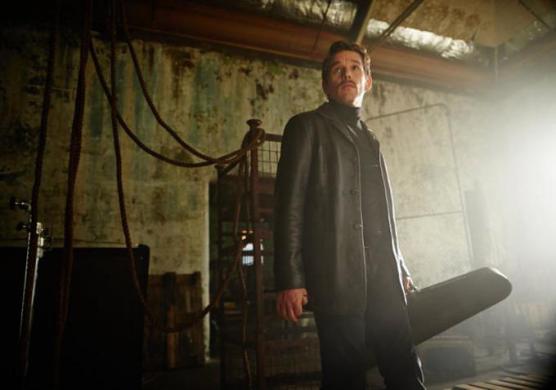 Luckily, what we end up with is the first great film of 2015, a very well-hidden gem. It is an existential journey where colloquialisms take on greater meeting. It is kept compelling by two incredible cast members while swerving in and out of plot twists and non-linear storytelling to keep the audience on its toes.