So it’s been a while since we’ve done our alternating Tabletop/Cheap Games weekly review and that’s because…I keep forgetting to keep up with it. But we’re back!

This is a follow up to an old review about Firefly: The Board Game. Based on the cult sensation television show created by Joss Whedon, it’s an artistically impressive game with some serious pacing problems. All the pieces are well crafted, the currency is the the best looking money in gaming and the cards and whatnot all look good. Where the game runs into problems is that it take hours to get the ball rolling. You spend half the play time puttering around the board getting a team together until you can manage jobs and then go from point A to point B hoping you have the characters needed to meet the randomly drawn criteria.

If you’re a fan of the source material it’s a really good way to get immersed in the universe, otherwise it’s a very drawn out RPG with very little interaction between the players. Apart from trading goods by being in the same space at the same time you might as well be playing solo. It’s a 6 out of 10.

In a rare case the expansion packs do more than add variations and new profiles, but elevates the enjoyment of the game a substantial amount. Today we’ll give you a run down of what they offer and which ones we suggest picking up.

This original booster pack adds 50 mission and item cards to the game. Haven’t played it myself but I heard it adds little to the game and has some balance issues. This is hearsay, but it doesn’t sounds essential. 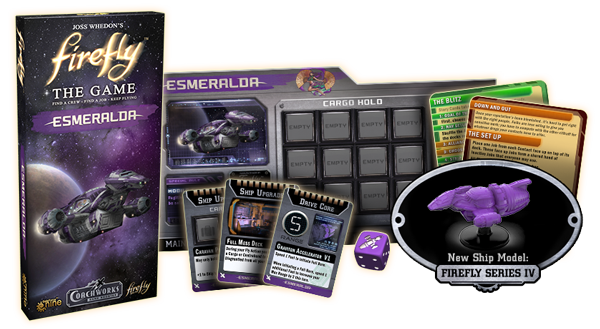 One of these booster packs is already on the shelf with another two becoming available. Each one adds another player to the original line up of 4, and includes in each pack a new Firefly model, a coloured Firefly dice and a unique set of cards and profile sheet. Although the models look the same each booster pack contains a slight variation on the standard vessel. The Artful Dodger is a faster ship, the Esmeralda is geared towards transporting passengers and the Jetwash is fitted for cargo with a larger hold. If you choose to buy any one it will be down to personal preference and gameplay style. Worth picking up if you want a cheaper way to increase your player count, but you’ll still face the same issues with the base game.

The first of the big expansion packs that makes a big switch up to the game. Blue Sun includes an expansion to the board that fits neatly onto the end of the existing board (make sure you have a big table!). In addition to a new couple of planets and solar systems you can visit Miranda from the Serenity movie, but it comes with the expected risks! Two new Contacts (Lord Harrow and Mr. Universe) to get jobs from are added on the board. One of these contacts, Mr. Universe, doesn’t offer stand alone jobs but lets you include new criteria to existing missions with increased rewards. These new area of the board is mostly the ‘Rim Space’, adding a third Navigation Deck alongside the Alliance Space and Border Space decks, and a new shopping locale – Meridian – that offers, among other things, Mal’s revolver and Fruity Oaty Bars. A couple of new Captain and Story options are included, giving a few new choices for how you start the game.

Increasing the amount of risk for players is the welcome addition of two new Reaver Cutters. In the base game the single Reaver ship was more of a nuisance than a threat, only catching you when you’re unlucky enough to draw an encounter card from the Navigation Deck. New navigation cards ensure that the Reavers can be moved around by other players more frequently, and they leave beacons in areas of space they visit. Strategy is now needed to avoid encounters with the space cannibals, and you can use them as obstacles to competing players. This takes the feeling of wandering around empty space away from the game and adds an increasing sense of danger.

This second major expansion adds a much needed player interaction element to the adventure! As we noted before the only interaction in the base set is trading, and Blue Sun gives players a few more options of moving the Reavers into each others paths. Pirates and Bounty Hunters adds…piracy and bounty hunting. Mixed into the job decks are jobs that require you to attack your fellow players, choosing one of the 3 stats (combat, mechanical or grifting) to make your way into their ship and steal their cargo and money.

Bounty Hunting is even more fun. Throughout the game there is always three bounties on display, putting a price on the heads of characters within the game. If they’re in your crew you can dump them with the law and collect a packet, but your team will become disgruntled. If another player has them you can chase them down and go the piracy and kidnap route. If they haven’t entered the game yet you can head to their last known location and try to catch them. Bounty hunting is a great optional side quest that keeps the dynamic between players shifting as new bounties become available.

Plus there’s completely new ships! Assuming you don’t have any booster packs this brings the game up to 6 players, making much better use of the board, and a bigger range of options. Unlike the booster packs these are totally unique rather than variations on the Firefly Class. The SS Walden is the heavier ship with a massive cargo hold, making it perfectly suited to smuggling, transport and piracy. The Intercepter (the steer skull shaped craft of Jubel Early) is much faster but can only hold a small amount of cargo and crew members. These craft is better suited to capturing bounties as it can chase down other players and nab their crew.

A couple of painted models.

Along with new Captains and Stories this set mixes up the game the most, allowing for more interaction and a more competitive, aggressive way of playing. This is great for an RPG because, ultimately, every player is going to want to play it their own way.

The booster packs are only recommended for players who are going to play it frequently. If Firefly is not one of your most played sets then they’re not so much required. Blue Sun mostly makes the game bigger (although the extra Reavers are a huge plus) and Pirates and Bounty Hunters make it better. We’ve found that the best way to play the game is with the inclusion of both Blue Sun and Pirates and Bounty Hunters, making the game essentially bigger and better. With a six player game we’ve got a full board full of action for a solid afternoon of gaming. The game going makes the jump from a 6 out of 10 to a solid 8 with these two.

Hopefully they’ll start packaging the base set with these expansions, because they’re highly recommended.