Is ‘Inside Out’ for Kids?

With the release of any new Pixar film the internet bubbles over with excitement. Even if it’s one that doesn’t pull in record-breaking box office it will find a niche in our collective consciousness and be regarded as among the highest quality animation and story telling modern Hollywood has to offer.

This past week has given us their latest effort, a somewhat surreal work called ‘Inside Out’. The bulk of the movie takes place in the mind of a young girl named Riley, with the main characters being personifications of her key emotions: Joy, Sadness, Fear, Disgust and Anger. They work together to control how Riley feels and give her positive experiences. During a challenging move to a new state, Joy and Sadness wind up trapped in the long-term memory. Unable to manage her feelings Riley slips into a depression while Joy tries to restore the balance. Among the immensely positive reviews and general adoration of the characters (can you think of anyone more perfect for the role of Joy than Amy Poehler?) there have been comments like this: 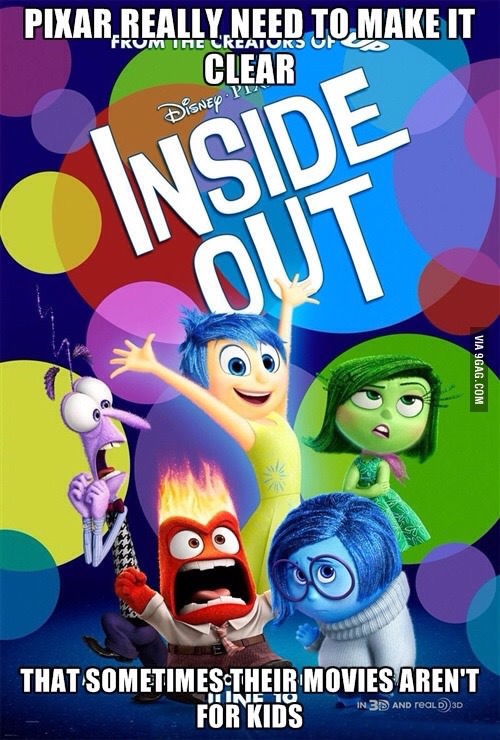 That’s not a stand-alone sentiment. I’ve heard it said by many people, including those who haven’t seen the movie or follow online opinions, that they’ve heard that it’s not really a kid’s movie in spite of being heavily marketed that way. It’s a movie for adults, it just looks like a kids movie because of the animation. I don’t believe this to be true. Without being confrontational, expressing the opinion that this isn’t for kids makes you a ding-dong. There are a few reasons why this is incorrect, coming down to an understanding of how Pixar approaches their material and what children take away from a cinematic experience. We’ll begin with this shocking revelation: Pixar have never made a kids movie.

Despite evidence to the contrary.

Many film-makers are, at heart, storytellers. Character, narrative and creativity are their focus. As such they don’t make movies with one particular group in mind, instead making them the most interesting and emotionally engaging experiences they can. Pixar’s mission statement is to keep it all about the story, and the story should be enjoyed by all. Not slipping in the odd rude joke to keep parents awake, just good inoffensive entertainment. People who make ‘kids movies’ aren’t storytellers. They’re marketers. Instead of character, narrative and creativity their focus is market research, measuring pop culture trends and merchandising. Pixar fits into the former category and have turned out such classics as Toy Story, Finding Nemo, WALL-E and Up. Original movies that can be enjoyed by anyone regardless of age or background. Companies who populate the latter group produce shite like the recent ‘re-imaginings’ of Postman Pat, Alvin and the Chipmunks and Lorax, or rubbish spin-offs like Minions, Penguins of Madagascar and Planes. Schlock that are based on familiar content and are micro-managed by the businessmen, not the artists. Minions is a prime example, being based solely on the comic relief of an existing franchise because they came up as popular in surveys, with the script being boiled down to 40 year old ‘safe’ pop culture references and fart jokes.

They might as well be whoopee cushions on legs for all the personality they have.

None of Pixar’s movies are ‘kids movies’ because the marketing division didn’t manage them. They are driven by story and concept. Inside Out is no exception. It’s a rich story with wonderful characters. It’s family friendly, meaning it can be enjoyed by all without boring the adults or talking down to the children. It’s not using references to Saturday Night Fever (why does every kids movie do this?) or current pop stars that the target audience won’t understand anyway, so it’s not going to feel aged or restricted to one culture or era as time goes on. Inside Out is a fantasy, and comedy and a drama – but it’s not a ‘kids’ movie. So what’s going to happen when kids are taken to see it? Is it going to be outside of their understanding? Will they confused and bored? Well, keeping in mind that Pixar don’t make kids movies and trusting in their track record I headed out to see it with my 5 year old in tow. It’s worth mentioning that my boy has Autism Spectrum Disorder, which will make the primary concept of the film even more difficult for him (we’ll came back to this at the end). We watched the trailers and he agreed that we should go and see it. Prior we discussed what it was about, but I’m uncertain how much he comprehended it. Nonetheless he liked the design and the characters, so off we went. During the movie we exchanged excited whispers about what was going on, what was funny and what was sad. During the credits I asked what part of the movie he liked best. He liked ‘Red’ because he made his head go on fire, and ‘Green’ because she was funny.

Again, perfect casting with Mindy Kaling bringing all of the sass.

On the way home we talked about what the characters were. I asked if he had little colourful people in his head as well. This idea was quite silly, apparently. So we talked about how sometimes we felt like the blue person, or the red person. That resonated a bit better. Even without the context of the characters being in a persons mind, and what different parts of the fantasy world represented, he still enjoyed the movie. The characters are funny for people of all ages – especially a guy whose head goes on fire when he’s angry – and the story has a simple thread to follow. Two characters are lost and have to find their way back to stop Riley from being sad. On the way they encounter many strange people and have adventures. That’s the plot of 86% of kids movies, anyone can follow that. Older members of the audience, from older children through to adults, will pick up on the small details and nuances and appreciate the movie on a different level. Not understand it fully or better, just differently. Jokes about seeing bears in San Francisco can be read as silly (a man who is so hairy he looks like a bear!) or a subtle joke about SF’s gay culture. No one reading is better than the other, or more correct, but they’re both giving the audience something to enjoy. As children grow older and revisit the movie they’ll enjoy it for different reasons, but that doesn’t mean younger kids are missing out on something. This is something that Pixar does immensely well. If you only watched Finding Nemo or Toy Story 2 as a child, try revisiting it as an adult or – better – as a parent. Totally different experience, no less impactful or heartfelt. 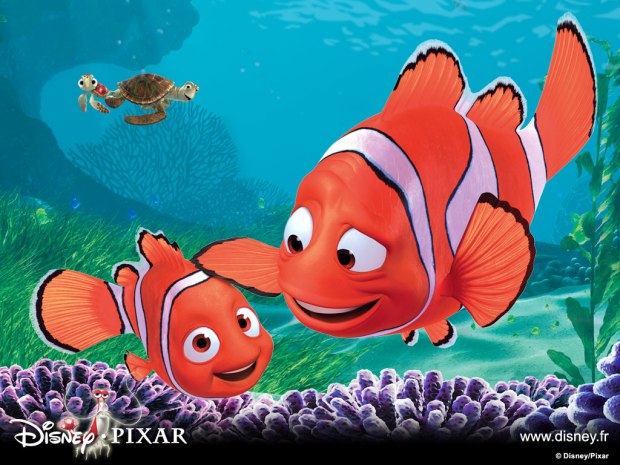 You’ll empathise with different characters for one thing.

Now let’s talk about why I took an autistic child to see Inside Out. Don’t go away if you’re not raising autistic children though, this still concerns you. All children require coaching on how to recognise and respond to emotions – for young’ns with autism this is more complicated because of they often have a greater disconnect from the emotions of themselves and others, but all children go through this process in their early years. What this movie gave us was an illustrated look at emotions in a bright, friendly environment. Now instead of talking about feeling sad, scared or angry we can talk about the Blue, Purple and Red people. Inside Out gave us a new way to discuss these concepts, and language to address ideas that have been difficult to describe to a small person. This is very positive for any child. As to some of the bigger ideas, like the role of dreams, jokes about ‘deja-vu’ and trips into the subconscious – obviously a 5 year old won’t ‘get’ them. But the power of cinema is that he doesn’t have to understand the words to understand the meaning. The subconscious was clearly the place for scary things, the dreams had the funny unicorn who was being silly and the deja-vu joke took place during a visually exciting train ride. Viewers in the older group might pick up on these unfamiliar terms and find out what they mean from the movie or by asking about them later. They might actually learn something from the movie – something important. Most kid’s movies just want kids to learn what toys to buy and that Saturday Night Fever is apparently funny to parody again and again (did anyone actually watch SNF? It’s kinda dark – lots of sex and gang violence…). Should you take your kids to see Inside Out? I think so. Don’t be put off by people saying it’s too complicated or confusing for children. Have some faith in children. If you challenge them they’ll have the chance to step up and impress you. Maybe your kids won’t like it, or will feel really confused, but that’s ok. That’s a risk with any movie. They gave it a go and it wasn’t their thing. Just don’t underestimate the power of a good story or our children.