Plot:  The fifth film in the Terminator franchise, Terminator: Genisys completely re-writes the Terminator mythos.  When the human resistance led by John Connor (Jason Clarke) finally wins out and destroys the artificial intelligence Skynet, Connor reveals that Skynet’s last desperate ploy was to send a terminator back in time to kill his mother Sarah Connor (Emilia Clarke) to prevent his birth.  When Kyle Reese (Jai Courtney) volunteers to travel through time and save her, Connor willingly accepts.  However, when Reese arrives in 1984, the timeline audiences are familiar with from the original film has been completely altered.  Sarah is no longer the innocent waitress from the first movie, but a hardened and well-trained fighter raised by another terminator (Arnold Schwarzenegger) who she refers to as Pops.  Pops was sent back in time to be a guardian for Sarah after another terminator killed her parents.  Yet while the circumstances may have changed, the mission has not.  Together Sarah, Kyle, and the terminator make their way through a T-1000 (Lee Byung-hun), law enforcement, and time itself in an attempt to destroy Skynet and stop Judgment Day before it happens. 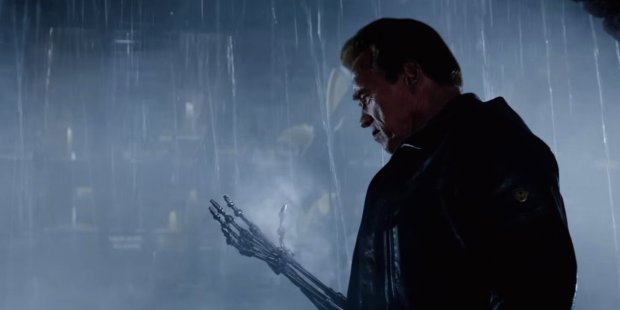 Review:  “Old, not obsolete.”  That’s a line brought up more than once in Terminator: Genisys, the latest installment in a franchise that goes back thirty-one years.  I went into the film with zero expectations.  Terminator: Salvation was a feces Panini with a side of ass fries, and when the film bombed in 2009 I figured that was the end for the murderous endoskeletons and their AI overlord.  The franchise, at least in my mind, had truly become obsolete. With all the negative reviews and general hate for Terminator: Genisys, I fully expected a melted T-1000 of a film.  Imagine my surprise when Genisys turned out to be a fun and (at times) thought-provoking film.

The real risk for Genisys was in rewriting the foundation of the original film.  1984’s The Terminator isn’t just a film that helped establish both James Cameron and Arnold Schwarzenegger as major players in Hollywood, it’s one of the best and most important science fiction films ever made.  Its legacy and relevance endures thirty-one years later, where in 2015 humans have become more dependent on technology than ever before.  (Incidentally, Skynet’s iteration in this movie comes in the form of Genysis, a global operating system set to link in virtually every device on the planet).  To erase The Terminator‘s legacy sounds like heresy.  Yet somehow it works and credit that to director Alan Taylor.  There’s just the right amount of nostalgia (the T-1000’s face reforming after a shotgun blast through the head, Arnie’s one-liners, the “no fate but what we make speech”) mixed with new action set pieces and a compelling new Skynet.  This film easily could have devolved into a two-hour nostalgia fest but Taylor strikes just the right balance.

In a lot of my reviews I usually discuss things like cohesion, pacing, script, cinematography, etc.  Forget all that.  If you want those things go re-watch The Last of the Mohicans.  Terminator: Genisys is a fun, summer popcorn flick and should be regarded as such.  The action sequences while not as epic as T2 are nonetheless phenomenal, especially the bus chase on the Golden Gate bridge and the assault on Skynet’s time displacement warehouse at the beginning of the film.  Speaking of the future sequences, I’d like to point out that Terminator: Genisys did a better job in twenty minutes of screen time showing the machine ravaged war-torn world of 2029 then Terminator: Salvation did in two hours.  The time displacement equipment was everything I always imagined it would be.  Also don’t worry about the time travel aspect of this film.  You’ll just get a headache.  As the great David Tennant said in “Doctor Who,” “It’s timey-wimey.”  Ironically another former doctor, Matt Smith, plays a small but crucial role in this film as Alex Wright, a recruit who isn’t all he seems.

And how can you not love a sequence where Arnold fights the 1984 version of the terminator?  It’s an Arnold vs. Arnold battle royale that lives up to the billing.  The only thing I wish they’d done is cut in the original sequence with the punks from the first film rather than doing a straight recasting.  It would have been more apt.  Regardless, it’s still a cool scene and the CGI version of Schwarzenegger as the 1984 terminator isn’t as horrible as everyone says it is.  Granted it’s not great but it’s far from Jeff Bridges in Tron: Legacy.

Terminator: Genisys  is not without its flaws.  The film relies too heavily on CGI effects at times when practical effects would have worked just as well if not better.  Additionally, the attempts to utilize Schwarzenegger comically were tiresome and overused.  Jason Clarke left me tepid as John Connor and while Jai Courtney isn’t nearly as bad as everyone says, Michael Biehn will always be Kyle Reese.  Courtney had big shoes to fill and his feet only went about half-way up the loafers.  Emilia Clarke of “Game of Thrones” fame did quite well as Sarah Connor.  She brought a toughness and empathy to the character that I didn’t expect.  Clarke is far from Linda Hamilton’s iconic mother of the future however.  And J.K. Simmons role as Detective O’Brien was just God awful.  Forget “Not quite my tempo.”  There wasn’t any tempo.

A sequence involving acid and a T-1000 went a long in pushing my complaints to the background though.

Sometimes all you need is one movie icon to make a film work and for Terminator: Genisys it’s Arnie.  He fits the role like an old glove.  It’s a testament to Schwarzenegger’s determination and exercise regimen that at almost sixty-eight years old he can pull this off.  He blasts a shotgun and throws a punch with as much vigor and passion as he did thirty years ago.  His final battle is epic.  And let me tell you what happens to his character at the end of the film is all kinds of awesome.  I won’t spoil it but let’s just say Arnold gets an upgrade.

While Terminator: Genisys never reaches the lofty heights of the first two films, I don’t believe that was Alan Taylor’s intent.  Any attempt to do so would have been disingenuous.  Rather this film is just a fun action flick that (supposedly) is the start of a new trilogy.  (Stay for the after credits scene and you’ll see why).  Even if this ends up being the last film however, it’s a good capper to the series and goes a long way to wash the bad taste of Terminator: Salvation out of our collective mouths.

Terminator: Genisys shows that while the franchise may be old, it’s far from obsolete.
My rating:  7.5/10

Incidentally here is how I rate the other films in the franchise: