Plot:  When a dangerous sandstorm cuts short the third manned expedition to Mars, the crew is forced to make an emergency escape. During the departure however, astronaut Mark Watney (Matt Damon) is struck by a piece of equipment and presumed dead.  Rather than endanger the entire crew,  Commander Melissa Lewis (Jessica Chastain) leaves Watney behind.  Unbeknownst to the crew, Watney survives the ordeal.  With limited food, no communication, and a habitat designed to last only 31 days, Mark will need to use all his skills as an engineer and botanist to survive.

Review:  Director Ridley Scott’s tract record hasn’t exactly been stellar of late.  Exodus: Gods and Kings and The Counselor didn’t exactly set the world on fire with critics or at the box office.

Fortunately, Scott rebounds in a big way with his latest film The Martian.

Based on the best-selling novel by Andy Weir, The Martian sports a top-notch cast, stirring visuals, and a surprising amount of humor.  It may be the best book to film adaptation I’ve ever witnessed.  The film captures the humor, vivid visuals, sense of adventure, and (as corny as it sounds) the triumph of the human spirit of Weir’s novel.  Credit screenwriter Drew Goddard for harnessing the essence of the book and transferring it to screen.  I wouldn’t be surprised at all if Goddard carries home the Oscar for Best Adapted Screenplay next March.

What’s intriguing about The Martian is that the antagonist is Mars itself.  There’s no malevolent xenomorph like in Scott’s Alien.  Mars’ as a whole isn’t callous, indifferent, or evil.  Those are the traits of a villain.  Rather Mars just IS.  Dariusz Wolski’s cinematography is truly breathtaking, as Mars becomes a vivid tapestry that unfolds throughout the film.  I say this with no hyperbole:  it looks like they filmed on Mars.  Harry Gregson-Willams’ elegant and spirit raising score complements the Martian environment and Watney’s trials and tribulations perfectly. This is very much a man versus nature tale, except in this case the environment just happens to be on the fourth planet in the solar system.  An environment that unfortunately for Watney has no breathable atmosphere, no water, no indigenous life, chilling temperatures, and violent sandstorms.

Thankfully, our protagonist Mark Watney is  up for the challenge.  Rather than relying on any divine intervention (although there is a scene where we definitely see his appeal to a higher power) Damon’s character survives on his ingenuity and skills.  Whether it’s cultivating Martian soil and combining it with a fertilizer made of his own feces in order to grow potatoes, using old Pathfinder equipment to establish contact with NASA, or retrofitting his Mars Rover in order to travel to the Ares 4 site, Watney’s actions show how far the mind can go to manifest human survival.  Ridley Scott does an admirable job of making the science aspect of the film not only understandable but interesting.  Rather than feeling like a lecture, it felt like a natural part of the movie. 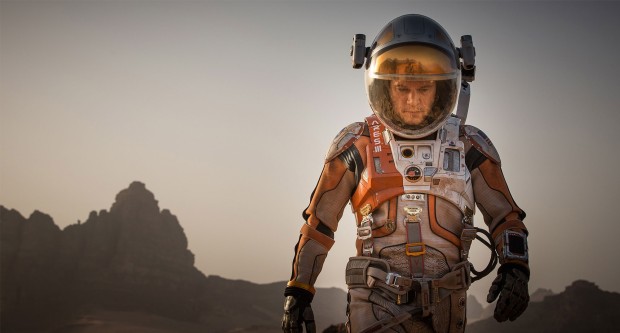 Additionally, Damon conveys the gallows humor of Watney perfectly.  He’s a character that knows that at any time he could die but is able to find the humor in almost anything.  The scene where he says he’s going to die on Mars simply because he has nothing to listen to but Commander Lewis’ disco is hysterical.  Or when he requests that NASA call him Blondbeard the Pirate because technically after leaving the habitat he’s in maritime waters.  It creates a likeability that the audience really gravitates towards.  Damon makes it easy to root for Watney and I daresay this is his best performance since Good Will Hunting.  Considering he carries the entire first act of the film, it kind of had to be.

The Martian also proves why the Academy needs an award for best ensemble cast.  Everyone from Chastain as the guilt ridden commander,to Jeff Daniels as Teddy Sanders the stoic head of NASA, to Benedict Wong as Bruce Ng, the dry humored director of JPL is perfect. Even Sean Bean as Mitch Henderson, shines as the Mars Mission Director who feels more for Watney and the crew of Ares 3 than anyone else.  (Watch for a scene that references Lord of the Rings, definitely funny for LOTR fans).  Even Community‘s Donald Glover plays a small but integral part in the movie as astrophysicist Rich Purnell, a man so caught up in his purpose he doesn’t realize that Teddy Sanders is the head of NASA.

I only had two grievances with the film.  Scott overused onscreen text to identify everyone’s title (I’ve always been of the show don’t tell mindset) and the romantic relationship between astronaut Beth Johanssen (Kate Mara) and astronaut Chris Beck (Sebastian Stan) is really underdone. But these are minor things that in no way take away from the greatness of this film.

Surprisingly the film I kept thinking about after I watched Ridley Scott’s latest film was Mad Max: Fury Road.  While both were set in barren landscapes, Fury Road was driven by action whereas The Martian was character driven.  While polar opposites tonally, both films exceeded in their objectives.  The Martian also feels like a nice complement to Ron Howard’s film Apollo 13 and hopefully inspires people to revisit that film as well.  More than anything I hope it inspires younger generations to gravitate toward science and space exploration in general.

The Martian quite simply is the best film ever made about Mars and one of the best films of the year.  Don’t miss it.