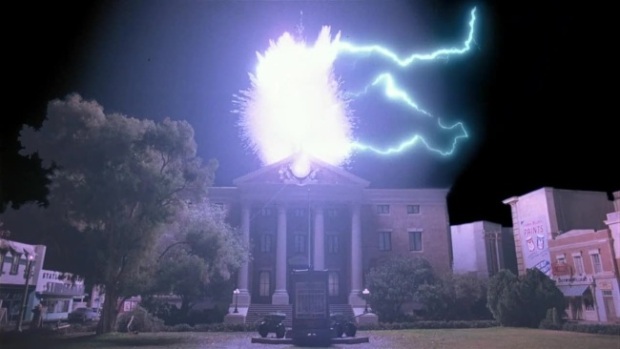 In preparing to write this article, something strange and ironic hit me.  The year that shaped me as a movie fan forever, occurred between August of 1984 and August of 1985.  During that period of time, three distinct films fanned the fires of my cinema destiny; a trilogy of films if you will.  The first was Ghostbusters, the second The Goonies, and the third was Back to the Future.

My Back to the Future experience sticks with me in particular because it was one of the few times where my father took me to a movie.  Usually it was my mother who took my sister and I out to the movies.  Or it was a family affair with all four of us.  But just my father and I?  That was something special.

Although I can’t remember the name of the theater, I remember the experience vividly.  (At least as vividly as a six and a half-year old can remember anything).  This was the 1980s, so the multiplex was still somewhat of a novelty.  Consequently the place my father and I went only had two rooms and they were both showing Back to the Future.  The outside of the theater was tan and faded, a slightly crumbling building that would close in less than two years.  Above the marquee were the comedy and tragedy masks I would later associate with William Shakespeare.  The smell of buttery popcorn was pungent and aromatic.  Ditto the musty but not unpleasant smell of my theater seat.

I remember my excitement going into the film.  Even at six years old, the idea of time travel was thrilling to me and the commercials looked so cool.  And the car?  My pre-adolescent self didn’t know or care that the DeLorean was a piece of junk automobile funded by drug money.  It just looked awesome. Other than those few nuggets, I knew almost nothing about the film other than that the guy who played Alex P. Keaton on Family Ties was the star.  In an age when the audience knows almost everything about a film going into it, ignorance was the rule rather than the exception. 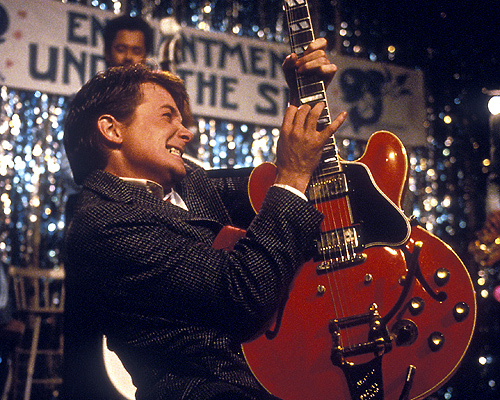 From the moment the lights dimmed and Marty McFly blew himself across Doc’s living room with the amplifier, to the final text of “To Be Continued…” rolled across the screen, I was hooked.  Even better?  So was my Dad.  Although he cringed every time someone swore and repeatedly said, “don’t ever say that,” I could see he was completely enthralled.  My Dad and I don’t always see eye to eye when it comes to movies (hey everyone has their own tastes) but we were definitely on the same wavelength when it came to Back to the Future.  It’s a bond that’s endured across three decades and though he doesn’t know it, I’m forever grateful that he and I got to share in that experience.

When we exited the theater,  my exuberance was palpable to anyone in a half mile radius.  And I’m sure annoying to my father after a bit.  I remember recounting all my favorite parts:  Biff and his crew slamming into the manure truck, the lightning bolt at the clock tower, and of course Michael J. Fox blaring out “Johnny B. Goode.”   But more than anything I remember asking my Dad, “When’s the next one coming out?”  Little did I know that the final tack-on “To Be Continued…” was meant to be a goof.  Robert Zemeckis and Bob Gale hadn’t any initial intentions of making a sequel.

Flash forward four years.  I’m now eleven years old, I’ve switched towns and schools, my sister is getting progressively more annoying, and much to my despair I’d already started getting acne.  In that four years, I’d spent approximately 15% of my time wondering when the Hell Back to the Future Part II  was going to come out.  Lo and behold, wonder of wonders, my Mom comes home from work one day and brings me the joyful news that the sequel would release November 22nd of that year.  All hail the Flux Capacitor!

My anticipation was even higher than for the original.  Over the last forty-eight months I’d seen Back to the Future at least thirty times.  I even watched a special on network television leading up to the release of the second film that Leslie Nielsen hosted.  This time the experience was a family affair and incidentally a late birthday present.  In my youthful cinematic inexperience, I loved the sequel even more than the original.  I mean come on!  Flying cars?  Voice activated systems?  Mothereffin’ hoverboards??!!  Plus there’s alternate timelines, multiple Martys and Docs, and the ultimate cock-punch at the end of the film, a “To Be Concluded” tag-on with a preview for Back to the Future Part III!  (Be honest, you know you were a bit pissed that you had to wait six months to see the conclusion.)

Since then I’ve come to realize that Back to the Future Part II while very good, pales in comparison to the first, and let’s be honest, is kind of rehash of the original at least for a few scenes.  Nevertheless, as soon as that sucker was available for VHS purchase (remember those kids?) I was first in line counting out change from my DeLorean piggy bank. 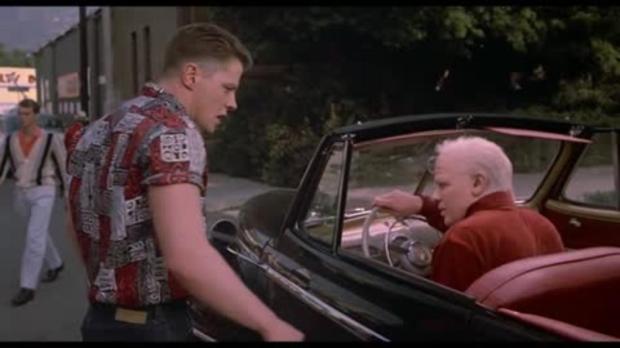 Despite its flaws, the film still means a lot to me if for no other reason than I was intrigued to see what the future would actually look like when 2015 finally rolled around.  Would we have flying cars (obviously not), would the clean energy promised by Mr. Fusion be a reality (unfortunately not), what would the clothes styles be like (hideous but in a different way), and what would I be doing in my own life?  (Answer:  not what I’d anticipated).  That promise of the future, that sense of wonder; that’s what redeems Back to the Future Part II as a film, warts and all.

Not six, but seven painful months passed before I was finally able to catch Back to the Future Part III.  For some reason that not even Doc Brown could explain, the film wasn’t playing at the major theater my family usually went to.  So I had to wait until June.  (First world movie problems, I know.) What’s ironic and an oddly perfect bookend, was that I also saw the concluding installment in another decrepit, crumbling, but intimate theater.  Incidentally, this theater would also be closed within four years and rightly so.  Three years later I watched Tombstone in the same theater in the dead of Winter with no heat and a leak at the end of the aisle roughly the size of the Anduin River waterfall from The Fellowship of the Ring.

Back to the Future Part III was distinct from the other two films, a maverick that fit with the trilogy but almost like a slightly worn down puzzle piece.  We have the familiar tropes:  Buford Tannen as the bully, a successful attempt to return to the future via a scheme involving a train, and even a final shot similar to the original film.  But we also have a major unexpected and welcome component:  Doc Brown falling in love.  Yes it was the cliché “love at first sight” angle, but it worked.  Personally, there was a self-realization in the movie that, “Hey Doc deserves love too!” that really stuck home.  The juxtaposition of a man of science having an emotional and human experience was perfect.  In a lot of ways Doc Brown is a milder, less socially awkward version of Sheldon Cooper from The Big Bang Theory.

In a sense everyone gets the happy ending audiences were hoping for.  Doc gets Clara and has a family, Marty avoids wrecking his future by NOT racing Niles and hitting the Rolls Royce, and Biff gets to appreciate Marty’s  cowboy hat.

Ok maybe the last one is a stretch.

In any event, in a time when happy endings are frowned upon as an antiquated cliché that drips sentimentality and has no place in modern cinema, Back to the Future is a refreshing quaff of fine wine.

I want to share one final important reason why the Back to the Future trilogy means so much to me.  Like millions of people across the world I suffer from clinical depression.  I’ve had it almost twenty years.  Twelve years ago I was hospitalized for my depression twice within a span of weeks.  I was twenty-four years old and alone.  Yet through all that pain and torment two phrases from Doc Brown kept sticking with me, “If you put your mind to it you can accomplish anything,” and “Your future hasn’t been written yet.  No one’s has.  So make it a good one.”

As corny as those lines are they helped.  Furthermore, they have an essential truth to them. I’m proof positive of that.  Twelve years later I have a house, a beautiful wife, and a son I love more than all the Star Wars swag in the galaxy.  I also have the honor of writing for this website.  I have the honor of sharing my inner geek and my writing talents with people all over the Internet.  The Darth Gandalf of twelve years ago would have laughed in your face if you told him what his life would be like in 2015. 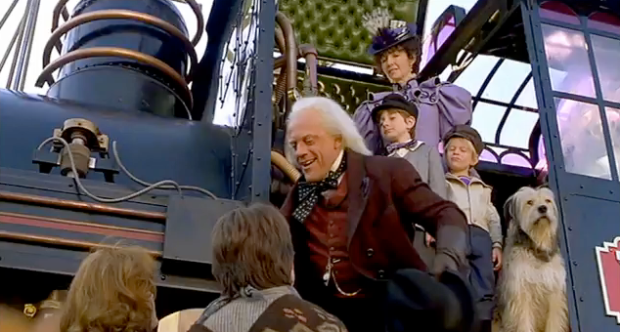 Without a shred of hyperbole I can definitively say that the Back to the Future trilogy shaped my childhood, it shaped my life as a film aficionado, and it inspired me in one of my darkest hours.  I can only hope that my son one day draws joy and inspiration from this trilogy like I did.