Oh, hey…a board game based on a video game. That totally sounds like a worthwhile investment. Kinda like replacing a Blu-Ray with a VHS.

On the other hand, I’ve long loved the XCOM game series and have been playing them since the original came out in 1994. It’s also produced by Fantasy Flight who have a knack for capturing the feel of their source material. Their tabletop adaptations of Battlestar Galactica and Game of Thrones are praised for their ability to put the players in the mindset of the characters they take on. So let’s grab XCOM and give it a whirl. Let’s also download the free app, because the game doesn’t work without it. We’ll explain that in a moment.

For those not familiar, XCOM the video game series positions you as the commander of an international military and R&D organisation called ‘X-COM’, assembled and tasked with the sole of purpose of defending Earth from the aliens who have been launching attacks around the globe. You manage your resources, research and develop new equipment based on alien technology recovered from battles and run the show during combat missions. The board game takes the same approach but with a co-op angle. Each one of the (up to) four players is in charge of a different area of the XCOM organisation – Commander, Chief Scientist, Squad Leader and Central Officer. 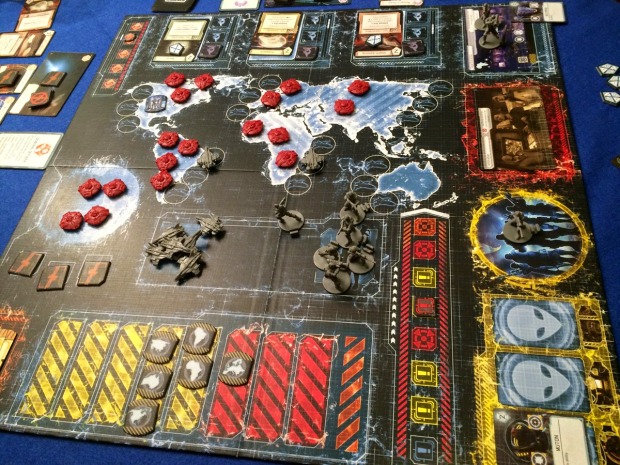 What immediately separates this out from other co-op games like Pandemic and Shadows Over Camelot is the degree of specification each role has. Rather than the usual arrangement – each player having the same actions but with one special move – there’s practically no overlap in each persons goals and abilities. The Commander deploys the Interceptor jets to take down UFOs, chooses which Crisis will effect the team and makes sure you don’t exceed the budget. Chief Scientist chooses new technology cards to research and assigns scientists to the task. Squad Commander assigns soldiers of different types to missions and base defence. The Central Officer deploys satellites into orbit and communicates instructions from the app. Everyone has an equally important role to play, with the Chief Scientist needing to keep track of available upgrades that will be essential to winning the game, while the Squad Leader has to makes the right call on which soldier to place where to avoid casualties and defend the world, while the Commander prevents them both from over-spending in one area causing problems elsewhere. 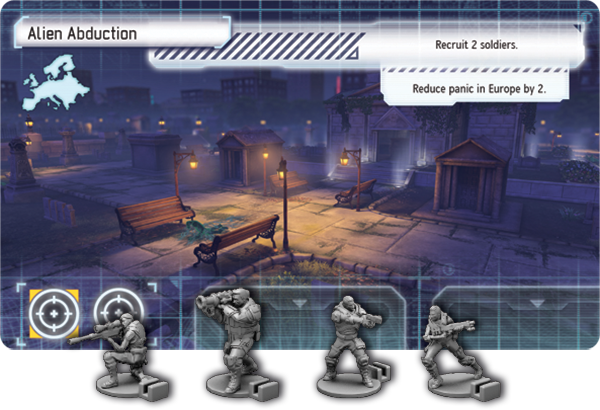 Every round of play goes through the Timed Phase and then the Resolution Phase. The Timed Phase essentially sets the board for the second half where results are determined. Tasks are relayed one at a time from the app on a phone, tablet, etc., and given to the rest of the team by the Central Officer. Whether it’s deploying troops, picking a research focus, placing invading UFOs or collecting the budget you’ve got a limited amount of time to make your decision – usually about 10 seconds – before the game moves on. Once everything is set up the non-timed resolution phase allows players to complete missions, build technologies and everything else through dice rolls. You can keep rolling as long as you have units on the task, but every roll raises the threat level. It becomes a push-your-luck mechanic where the odds increasingly stack against you and you’re more likely to lose your assets. At the end of the round you input data about the global state of panic and damage done and it sets up the next round.

The app sounds like an odd inclusion at first. One might be hesitant to invest in a game that requires an app to function, or see it as a gimmick. Some board game do have apps to complement gameplay or add new features, but this game straight up does not work without it. That said, it’s extremely well integrated and very easy to use, never feeling like an intrusion. Having the randomised factors is a huge plus, and it streamlines the complex gameplay so that new players can pick it up quickly. The timer gives the game a level of tension few board games can achieve and the soundtrack and design add atmosphere to the play session. The only problem we’ve encountered was on the iPhone6+, when it would skip over some steps and wouldn’t backtrack. We had no problems with the iPad or iPad Mini. Another massive plus for the game is the removal of the co-op game Alpha player – that asshole who always takes charge of the game and begins dictating what everyone else should do because they’re convinced they’re the only one who can win it. Anyone who’s played a co-op has encountered this, the person who doesn’t grasp that a co-op game involves everyone playing it the way they want towards a common goal (I used to play with someone who’d reach over and take other people’s cards and play them). Everyone is so specialised and working on such a short timer that you only get enough time to offer brief advice and share ideas before a decision has to be made. It’s a co-op game that genuinely makes you feel like a team of individuals contributing to a whole.

It’s a fantastically presented game that perfectly captures the feeling and the tone of the source material. The board looks indecipherable at first but it’s designed so each unique role has their own space, and that makes sense. It’s complex without being fiddling and challenging without being frustrating. We’ve got about a 50% win rate and it randomises the game each time, so we’re looking forward to more plays. We’ve also tried some solo games, but the amount of information to manage makes it very difficult for anyone other than a seasoned player to play effectively. If you want a really good entry into the co-op gaming genre than put this on your wishlist.

← Disney Dinner and a Movie: ‘Pinocchio’
Movie Review: ‘In the Heart of the Sea’ →