‘Rayman’ is a bit of an oddity. He’s never achieved ‘icon’ status or been hailed as a console mascot and would be largely unrecognisable to non-gamers, yet he’s been appearing in games for over a decade with dozens of titles to his name. He had been a best selling character for years, but it’s the two most recent releases – Origins and Legends – that have been the most acclaimed. Perhaps he’s just spread out over to many systems and genres to make a decisive mark on the industry. Regardless of the reason, Rayman Legends can be downloaded pretty cheaply and you’d be a fool not to.

It’s a platforming game in the most basic sense. You run, jump and hit. That said it’s as good as the genre gets. It’s startling that the Mario series is still considered the be-all, end-all of platforming when there’s competition like this around, and they’ve left the business of designing levels to the players. Up to four people can play as different versions of Rayman (whatever he is, weird limbless thing), Teensies, Globox and viking warrior Barbara or her sisters. You work through five worlds of different themes to defeat the evil wizard and safe the people.

Two major things to note. Firstly, there’s a butt-load of levels, challenge versions of levels, hidden stages, bonus levels, a soccer mini-game and even remastered levels from the previous game in the series. In total you’re looking at 200+ levels. It’s a lot of content, and you rarely find and save all the Teensies on a first run through so there’s a reason to replay them. 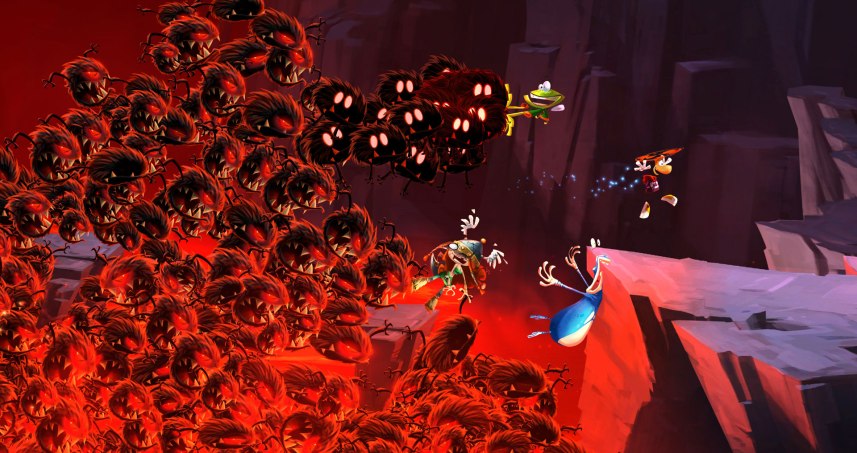 Secondly, and more impressively, almost every level feels unique. Some have a set concept, like a castle sinking into quicksand or escaping rapidly growing spiked tendrils. There’s no player fatigue through repetition here – you’ll want to keep playing just to see what the next level is going to throw at you. If you know anything about the game already you’d have heard about the awesome music levels at the end of each world, frantic platforming challenges timed against well know songs. Check out this Mariachi version of ‘Eye of the Tiger’…

This is without a doubt one of the best platforming games you’ll play, and it’s achieved without any overarching motif like Fez or Braid. It’s especially good as a family game, and it doesn’t dole out harsh penalties to less experienced players. It looks great, it sounds great and it plays great.