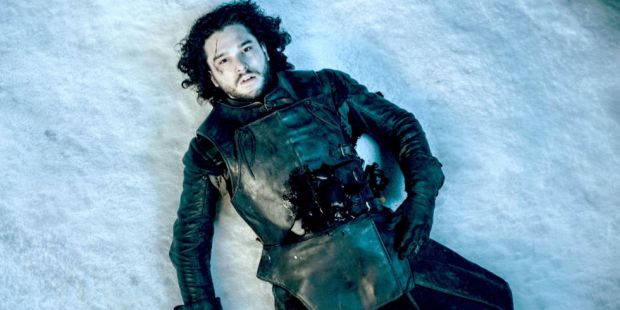 Episode Synopsis:  With the murder of Lord Commander Jon Snow, The Night’s Watch is divided against itself with Ser Davos and Melisandre caught firmly in the middle.  At Winterfell Ramsay Bolton’s victory over Stannis Baratheon is short-lived as his bride Sansa and Theon Greyjoy have escaped.  Jamie arrives back in King’s Landing with the corpse of his murdered daughter Myrcella while Cersei awaits trial.  Meanwhile in Dorne, Ellaria Sand and the Sandsnakes plot to usurp power from Prince Doran.  In the wake of Dany’s disappearance Varys and Tyrion are left to deal with the struggles of Meereen while Daario Naharis and Ser Jorah pursue the khalasar that has kidnapped her.  Dany is brought before Khal Moro.

Review:  Well we are through the looking glass people.  With season six of Game of Thrones we’ve come to the end of most of George R.R. Martin’s source material.  Other than a few things involving the Iron Islands and Bran’s storyline with the three eyed raven that’s set for later this season, all of us, book readers and non-book readers alike are venturing into new territory.  “Here Thar Be Dragons”. (Pun definitely intended.)

As a season premiere, “The Red Woman” was pretty solid.  The show runners managed to touch on all of the main players aside from Sam and Bran’s storylines.  Appropriately, the start of season six kicks off right where it left off–with the murder of Jon Snow.  Not surprisingly, Ser Davos ends up being the one to find the deceased Lord Commander and smartly secures him away to a hidden location in Castle Black.  What was shocking to me was that Ser Alliser Thorne openly ADMITTED that he and his cohorts did it.  Strangely enough, his justification seemed almost logical, with his main argument being that he loves the Night’s Watch so much he couldn’t bear to see it destroyed by a Lord Commander he felt was making bad decisions.  Thorne states Snow “thrust a terrible choice” upon him and he had no choice but to act.  I say that his justification seemed logical…but it’s not.  Thorne’s argument is essentially an equivocation, a way for  him to justify murder and wash  his hands of the whole mess.

At Winterfell, Ramsay Bolton is dealing with his own mess, as his wife Sansa and Theon have escaped. Ramsay’s introduction in the season premiere is quite different from what we’re used to seeing as he’s mourning over the lifeless corpse of Miranda.  It’s actually quite a heartfelt moment.  In retrospect, they were both the perfect fit, mostly because they were both psychopaths.  The moment however, is spoiled when Ramsay tells the Maester he can feed her to the dogs.  (Although she was the daughter of a kennel master so maybe he thought it would be appropriate? And sweet?  And incredibly fucked up?)  Ramsay also has to contend with his father Roose who implies that if he doesn’t get Sansa back, Ramsay’s heir position could evaporate quite easily, as Roose’s new wife Walda is pregnant with another child.  Roose and Ramsay’s father/son dynamic could play an interesting role in Ramsay’s character development this season, as it has in the past. 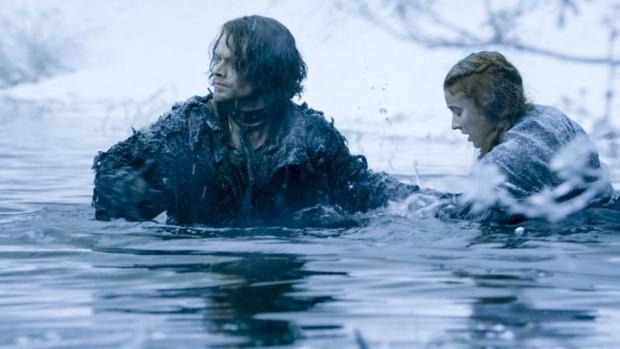 I think most fans were probably pleased that Ramsay’s wife Sansa FINALLY caught a break.  Just when I thought Ramsay’s goons were going to recapture Theon and Sansa, Brienne comes riding in with Pod and saves the day.  With a little assistance from Theon of course. (It’s funny how much I pity Theon now after the atrocities he’s committed.  He’s really trying to redeem himself.)  Sansa’s supporters have increased by two.  Now the question is do they go north to Castle Black as Theon suggested?

One of the saddest parts of season five’s finale was Myrcella admitting she knew Jamie was her father and then subsequently dying in his arms.   The look in Jamie’s eyes as the boat slowly bears the corpse of Myrcella to shore is just heart wrenching.  Cersei doesn’t even weep, only spills a few tears as she’s become numb to all the tragedy that’s befallen her.  She even begins to question if she’s the monster everyone sees her as.  Cersei remarks on how sweet Myrcella was, how unlike Cersei.  This is part of a reoccurring theme in Game of Thrones in that your parentage doesn’t define you.  We’ve seen it with Jon Snow and we’ve seen it with Dany.  Jamie’s reaction to Cersei’s lamentation, “Fuck everyone who isn’t us,” typifies what I think the character arc is going to be for Jamie this year. With the death of his son, his daughter, his father, and the betrayal of his brother, I think he’s going to take a big step back this year and go on an I-Don’t-Give-A-Fuck path of destruction.  Who’s destroyed, whether it’s his enemies or himself, remains to be seen.

The most shocking development in “The Red Woman” had to have been the plotline involving Dorne. I was shocked when Ellaria Sand took out Prince Doran and then two of the Sand Snakes killed Trystane.  (By the way a spear through the back of the head was definitely the coolest kill of the night. The follow up line, “You greedy bitch,” was pretty hilarious too.)  These two deaths are a big deal.  The power balance in Dorne just experienced a tectonic shift. With the deaths of Myrcella, Doran, and Trystane, this may be the precursor to war between King’s Landing and Dorne.

Tyrion and Varys scenes were somewhat underwhelming, with the discussion centered mostly on how they going to run Meereen without Dany.  Besides the burning of all the ships in the bay and the funny miscommunication between Tyrion and a beggar lady, nothing much of importance transpired between the two.  Shame.  I’m sure we will get plenty of meaty stuff between Varys and Tyrion as the season goes on however.  Much the same can be said for Daario Naharis and Ser Jorah’s interactions. Jorah’s Grayscale is progressing (no surprise there) and both seekers discover Dany has been taken by the Dothraki.  (Also not surprising.)

Dany’s scenes are much more fascinating.  Here’s a queen that’s been brought low, dragged and treated like a slave.  Although she demonstrates her defiance to Khal Moro, he laughs in her face.  It isn’t until he discovers she’s the widow of Khal Drogo that he changes his tune.  Yet as a widow of a Khal, by custom Dany’s fate is to be taken to the city of Vaes Dothrak, there to live out her life among the widows of other Khals.  For Dany this probably seems like a fate worse than death.

Arya unfortunately really got shortchanged in this premiere.  We find her as a blind beggar on the streets of Bravos, trying to find secrets from others.  Other than getting her ass kicked by a servant from The House of Black and White, there’s nothing new there.  I’m sure she’ll end up going all Stick from Daredevil by the time the season ends though.

The season six premiere ends with a standoff between Davos, Night’s Watch men who are loyal to Jon, and Ser Alliser Thorne’s faction.  Davos is right in thinking that Thorne doesn’t mean to leave any of them alive even if they surrender.  Ser Davos’ development throughout season six will bear watching. With Stannis gone, his loyalties lie with no one now.  His plan, not surprisingly, is to enlist the resources of Melisandre…and in a shocking development Game of Thrones unveils that the Red Woman is not a hot redhead but actually an old crone, something that appears to be covered up by her ruby necklace.  Weird.  Those of you disappointed she hasn’t resurrected Jon Snow with the help of the Red God will have to patiently wait.  Seriously guys, slow your roll, it’s a ten episode season.

Overall the season six premiere of Game of Thrones turned out well, and I had only a few minor complaints.  Check back next week for episode two, “Homeward Bound.”

← Nine Nominees For The Supreme Court of Nerds
Movie Review: ‘The Jungle Book’ →

One thought on “TV Review: ‘Game of Thrones’ Season 6 Episode 1 “The Red Woman””