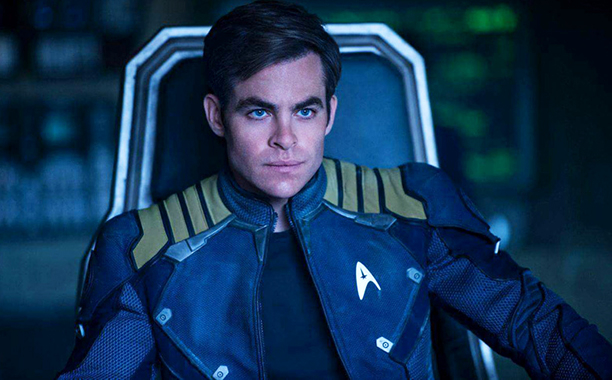 Plot:  Three years into the U.S.S. Enterprise’s five-year mission, Captain James T. Kirk (Chris Pine) finds himself at a crossroads as his 30th birthday approaches. He’s begun to question why he joined Starfleet and if his true place is on the bridge of a Federation ship.  Meanwhile Spock (Zachary Quinto) breaks up with his longtime girlfriend Nyota Uhura (Zoe Saldana), and ponders going to New Vulcan to continue the societal rebuilding of his people.  When the Enterprise’s shore leave on Starbase Yorktown is cut short to attempt a rescue mission, the crew is dispatched to an uncharted nebula.  There they find Krall (Idris Elba), a mysterious alien with strange abilities and Hell bent on destroying the entire Federation.  Stranded on a remote planet and cut off from each other, the crew–Kirk, Spock, Uhura, McCoy (Karl Urban), Sulu (John Cho), Scotty (Simon Pegg), and Chekov (Anton Yelchin)–must unite and stop Krall from annihilating the entire Federation.

Review:  It’s been a bit of a bumpy road for Star Trek Beyond.  J.J. Abrams left to dip his toe in another franchise far, far away, Robert Orci left the project over the ubiquitous “creative differences”, and the studio hired an action director, Justin Lin (known mostly for his involvement in the Fast and the Furious franchise) to man the helm.  In addition, producers were facing backlash from Star Trek Into Darkness* from fans and critics alike.  As The Beatles once sang, it was “a long and winding road.”

That’s why it gives me great pleasure to say that in spite of the odds, Star Trek Beyond is a rousing success.

A film that’s sure to please both old school Star Trek fans and fans of the reboots, Star Trek Beyond succeeds on almost every level.  It’s philosophical, socially relevant (surprisingly addressing PTSD), cerebral, funny, and action packed.  This film is a true testament to teamwork.  The producers, director, actors, and writers all come together to create a cohesive and relevant film and the first movie this year that I’d love to see a second time in the theater.

One of the biggest issues that fans and critics had with Star Trek Into Darkness was that it rehashed a previous storyline (Khan) with some minor tweaks.  You could also make the case that many of the scenes mimicked the 2009 film as well.  Thankfully writers Simon Pegg and Doug Jung created a thoroughly original and entertaining script that provokes thought as well as entertains.  As I previously alluded to, this is the kind of story that could have fit easily into the original series.  It’s socially relevant but not in a heavy-handed way (Sulu’s homosexuality is barely addressed), sometimes profound, and yet manages to possess the sense of adventure and sci-fi entertainment that made the original series great.  The theme of unity verses individual goals overshadows (in a good way) the entire film.  Beyond also proves to be somewhat of a mystery tale as well, mostly centering around Krall. 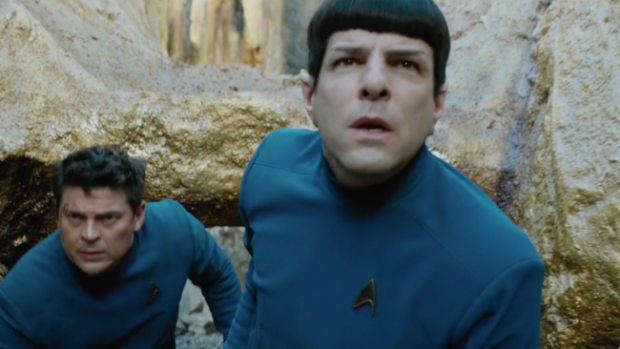 While the new Star Trek films have their share of critics that are quick to point out flaws, even the most ardent detractors have to admit the cast is great.  The chemistry between the actors is just as good (in some cases better) than the original cast.  One of the choices I loved about Star Trek Beyond was the decision to pair off the various crew members.  Once the crew is separated it’s Kirk/Chekov, Sulu/Uhura, and Spock/McCoy.  Scotty pairs off with alien Jayla (Sofia Boutella), an alien who lost her parents at the hands of Krall’s minions.  Each duo gets its own moment to shine and none of the characters ever feels shortchanged.  The best of the bunch were McCoy and Spock.  Star Trek Beyond explores the friendship between Spock and McCoy in a way heretofore unseen.  There’s also a particularly funny scene involving the removal of a piece of shrapnel from Spock.

Of the three films thus far, Idris Elba’s Krall serves as the best antagonist.  Initially, I was frustrated that Krall’s motivations to destroy the Federation weren’t readily apparent.  However, it’s not until the third act that we find out why and when it happens, believe me it’s immensely satisfying.  Elba’s Krall actually ends up being a sympathetic villain by the end which is a testament to Elba’s acting talent.  Krall is a much more layered antagonist than Eric Bana’s Captain Nero or  Benedict Cumberbatch’s Khan.  With Beasts of no Nation, Zootopia, The Jungle Book, and now Star Trek beyond, Idris Elba is on a roll.

For those of you concerned that Star Trek Beyond is solely a cerebral film, fear not.  Despite it’s deeper meanings, when push comes to Vulcan neck pinch on the action, Star Trek Beyond delivers.  BIG TIME.  The last twenty minutes is pure action and a total blast to watch. (You may even recognize a familiar Beastie Boys song in there as well.)  I’d expect nothing less from the director of several Fast and the Furious films.  The ultimate confrontation between Kirk and Krall is worth the price of admission alone.

The only problem I had with Star Trek Beyond was the first ten minutes of the film.  It was completely goofy and almost played out like a SNL sketch of Star Trek.  Thankfully after that minor stumble out of the gate, Star Trek Beyond goes full bore to warp speed and doesn’t stop until the credits roll.  I cannot wait for the fourth installment.

*For my part I loved Star Trek Into Darkness.  Not exactly sure why it gets all the hate.