We in the United States are now in the midst of the season of summer, as the days are longer, hotter, and filled with possibility. For many of us, we now find ourselves trapped inside our regular jobs with only our memories of this magical time of year to keep us going. If you find yourself nostalgic for spending your summers; 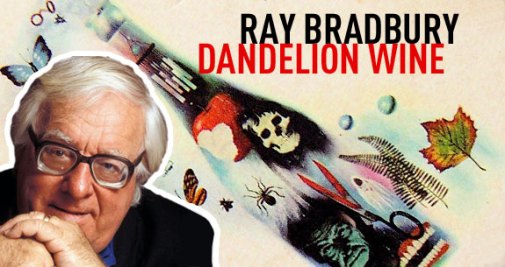 riding your bike, trying new things, seeing movies and observing the usual summer time rituals, literary legend Ray Bradbury has you covered. Bradbury is of course the legendary storyteller who brought science fiction and fantasy to mainstream audiences with such classics as; the Martian Chronicles, the Illustrated Man, Something Wicked This Way Comes, and countless other tales. As many literary critics have pointed out, while these may be his most acclaimed writings, Dandelion Wine is his most personal work.

The book has a loose plot following, young Douglas Spaulding and his brother Tom as they venture through the summer of 1928, with a list of all the new things they have to try before summer inevitably ends. With each chapter we as the readers are treated to a different tale from their small Midwestern town, almost the style of an anthology. Some stories are funny, some scary, and others are downright heartbreaking, as the colorful cast of townspeople interact with the Spaulding brothers. Seemingly simple on the surface, this ode to summer deals with many complex issueswhich Bradbury often tackled. As the legendary author often did, he looked at the rapid advancement of technology and how it often robs us of certain joys; such as when a characters builds a Happiness Machine which ends up sadly living up to its promise in such an extreme way that it becomes a Sadness Machine. Or the Spaulding’s grandfather who chastises the young local newspaper writer for utilizing a new advanced lawnmower, which would destroy the dandelions, which they

use every year to make Dandelion Wine. But the theme, Bradbury explores most in this book is the fact that as we grow up we have to become accustomed to loss. Though a mysterious killer known as the Lonely One personifies this theme, Bradbury weaves it throughout the book. Beginning with Douglas Spaulding’s friend moving away, the boy’s summer has a bittersweet undercurrent; the local trolley is being shut down, his friend from the newspaper meets his soulmate but time is against him, the elderly man he knows as the “Time Machine” makes one last trip to a town in Mexico, and finally he loses his grandmother. This may seem like the makings of a gloomy tale, but rather it is the necessary element to a strong coming-of-age tale, and it is counterbalanced by the quirky humor which comes from the fun characters the Spaulding brothers interact with.

On a personal level, this is a book I make a point to read every summer,as Dandelion Wine takes me back to a time I can never recapture, but am fond of remembering. The legendary author’s poetic prose style is all full display for the readers, and despite more subtle fantasy elements than his other works it is pure Bradbury through and through. If you have never read any books by this legendary wordsmith, this would be the perfect place to start as it gives readers the best idea of who Bradbury was an a writer.