Who Else is Imprisoned by Mr. Oz in DC Comics?

Starting last year DC readers were introduced to an enigmatic figure known only as Mr. Oz. The character seemed to be at an unknown location watching Superman and talking about his familiarity with the Man of Steel, he also made it clear that he was not the only person present as he talked to someone off panel. Superman eventually died and the Superman of the post-Crisis earth took up his mantle. In the Rebirth One Shot we once again saw Mr. Oz, this time he made it clear he held a mysterious connection to Superman. (SPOILERS)          In his most recent outing fan-favorite Red Robin, was believed to have been killed by the terrorist group the Colony, but rather Mr. Oz had whisked him away and now the former Titans leader is trapped in a mysterious realm. Nobody is sure what Mr. Oz’s connection to the larger DC Universe is, but it is implied that when someone gets too close to learning what they are not supposed to know he captures them. Could he be connected to the advanced technology that seems to be popping up in the DC books currently? Is he tied to the fact that the characters of the Watchmen universe who have messed with the timeline? These answers will surely unfold, but for now let us take a look at who else could be prisoner to this mysterious being.

Superman and Lois Lane: DC Comics’ most iconic couple have both fallen in battle recently, but come on who really believes they are staying that way? With Mr. Oz DC has the perfect doorway to bring these popular characters back to life in a logical way. Considering Mr. Oz first debuted observing Superman and Lois’ last words were that she could see Superman and that it all made sense now, it seems to be a safe bet that both are in Mr. Oz’s prison. 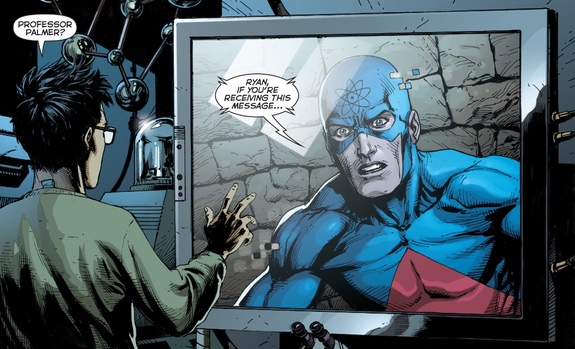 The Atom (Ray Palmer): When we last saw the shrinking former Justice Leaguer it was in the Rebirth One-Shot giving a message to his protégé Ryan Choi. Ray Palmer thought he was about to confront Chronos once again and instead found something much bigger. Given that whoever he was chasing was responsible for the alteration of time believed to be the doing of the Watchmen/Mr. Oz, perhaps the Atom learned too much and now have to pay for it.

Superboy (Conner Kent): One of the things fans have loved about Rebirth is the return of so many beloved characters. But the shift from the New 52 to Rebirth left one character behind, Conner Kent AKA Superboy. Considering that DC Publisher Dan Didio had a hand in creating the Teen of Steel back in the 90’s it is unlikely that they just forgot about him. During the Infinite Crisis, of which Geoff Johns was also the architect of, it was implied that he was one of those characters who seemed to have connections beyond his own world. If this is true, this would make him a prime target for Mr. Oz to imprison in his collection.

The Justice Society: In the Rebirth One-Shot, Wally West seemingly escaped from Oz and began to make his journey across the earth to rally his allies. One such hero was the hero of old Johnny Thunder. As an old man in a mental hospital, Thunder claimed that the legendary Justice Society has been forgotten. And in fact since the New 52, the heroes of DC’s past have been absent (not counting their Earth 2 counterparts). Could it be that; Jay Garrick, Alan Scott, Ted Grant, or any of members of this storied team are trapped by Mr. Oz?

The Joker: In one of the key moments in comics recently Batman found himself in Metron’s chair and asked it the one mystery the World’s Greatest Detective could never solve. Who is the Joker? The answer was one he did not expect, there are three Jokers. We see evidence that the prankster Joker of Bill Finger and Dick Sprang’s era is a different person from the murderous Denny O’Neil and Steve Englehart version of the character, who is also a different character from Scott Snyder’s Faustian clown. This begs the question, could or more versions of the Clown Prince of Crime be in custody under the watchful eye of Mr. Oz.

2 thoughts on “Who Else is Imprisoned by Mr. Oz in DC Comics?”