As many of you may know we are quickly approaching the most anticipated blockbuster of the year as Superman returns to the big screen perfectly timed to coincide with the iconic hero’s 75th anniversary. No doubt many of you are getting into Supermania and want to rush to your local comic shop to reacquaint yourself with the Man of Steel. But where do you start? Do you just pick something randomly? Is Superman the one with the red cape or the one with the point-ears?!!? Fear not because we here at the House of Geekery (greatest web site ever) are here to help you by giving you a guide to the essential Superman comics.

Action Comics # 1: The one that started it all. A Holy Grail for comic fans and collectors alike. In 1938 a Great Depression plunged the United States into despair as another World War loomed ominously on the horizon. It was during this bleak and seemingly hopeless time when two social misfits in Cleveland, who could not even afford paper to draw on dreamed of a hero. The ultimate hero; he was strong and fast, and most importantly he was a tireless champion to the average person giving them a hero to look to even though he may be fictional. Dressed in the garb of the circus strong men of that era, Superman saved an innocent woman from death row, stopped an abusive husband, and fought political corruption all in a single short story. Now we here at the House of Geekery would never advocate that you shell out a small fortune on anything (except for our lovely merchandise) but this story does exist in various reprints and trade paperbacks, it may take a bit of work to find but it is well worth it. 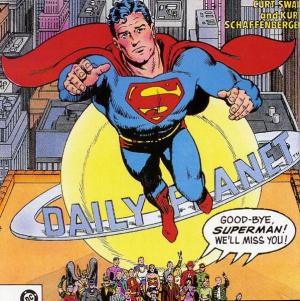 Whatever Happened to the Man of Tommorrow?: The times were achanging in the DC Universe. The Crisis on Infinite Earths loomed on the horizon waiting to change the entire landscape. It was decided that before everything was forever changed for a new generation of comics fans that it was only proper to pay a fond farewell to the incarnation of Superman that so many knew and loved. Seeing off one of the greatest icons in world history is no small feat that’s why DC Comics broke out the big guns in terms of creators. Legendary scribe, Alan Moore penned the tale while he was assisted by two of the greatest artists to ever work in the medium, George Perez and the man who many consider the quintessential Superman artist, Curt Swan. As Lex Luthor and Braniac, the Man of Steel’s two greatest foes join forces, Superman must face a challenge unlike he has ever faced before and it may even cost him his life. But remember this tale is an imaginary one….but then again aren’t they all? 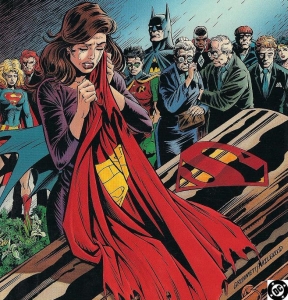 The Death of Superman: After many decades of saving damsels in distress and battling villains, many had considered the first super hero to be stale. So in 1993 the powers that be at DC Comics made a bold choice; to kill the Man of Steel. This epic event gave fans something they had rarely seen before as the seemingly invincible hero is pushed to his limits and must make the ultimate sacrifice. Easily one of the biggest events in comic history it gave the world a reason to miss Superman and wait impatiently for his return. 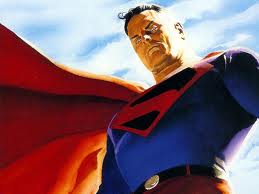 Kingdom Come: Not just a great Superman tale, this is one of the greatest stories ever told in the comic book medium. In a dark future where the next generation of “heroes” would much rather use their powers to wreak havoc than fight for truth or justice, Superman and his colleagues have gone into retirement rather than confront the growing problems in the world. But eventually enough is enough and an aged Man of Steel must leave his self imposed exile in order to save his adopted homeworld one more time as the planet rushes towards Armageddon. Gorgeously illustrated by Alex Ross and with the amazing writing of Mark Waid this is a must read for any comic fan. 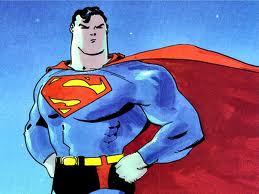 Superman For All Seasons: More often than not, Superman is portrayed as a tireless crusader for; truth, justice, and the American way. But in one of their famous retro takes on iconic heroes, Jeph Loeb and Tim Sale show the Man of Steel as a man. This Norman Rockwell inspired piece explores the early years of Superman as told by those closest to him. Readers will be able to relate to the character as we see him go through his challenges before ultimately fulfilling his destiny.

Superman Red Son: We all know the story of how an infant Kal-el crashed into the cornfields of Middle America where he learned good old fashioned values from a wholesome farming couple. But what if things turned out differently? What if the ship from Krypton landed in the Soviet Union, how would things be different. Mark Millar tells one of the most acclaimed Elseworld tales of all time as he ponders the question of nature vs nurture when it comes to the most powerful being whoever lived. 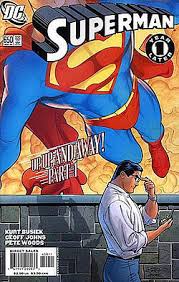 Superman: Up, Up, and Away: A year after the Infinite Crisis Clark Kent is still adjusting to a life without his powers. But as problems continue to arise in his absence it becomes perfectly clear that Clark must find a way to regain his powers and save the day once again. Written by two of the top scribes in comics right now, Geoff Johns and Kurt Busiek   we see that even with his powers, Superman is still a hero in his role as a reporter, exposing corruption and battling Intergang with the power of the press. But as Lex Luthor returns to prominence with a new weapon, Superman must put the cape back on to continue the never ending battle. This story not only looks at the Clark Kent side of the Man of Steel it also serves as a fantastic exploration of the relationship between the hero and his arch nemesis. Speaking of whom….

Lex Luthor: Man of Steel: It has been said that the best villains consider their actions heroic, and this comic shows us that Lex Luthor is one of those villains. While Brian Azzarello and Lee Bermejo may have risen to prominence with their graphic novel, Joker it all began here. For the first time we see the inner working of the great chrome domed mind of earth’s greatest criminal mastermind. The readers learn he simply sees himself as an ambitious man who is disgusted that humanity would rather rely on an alien than on him. 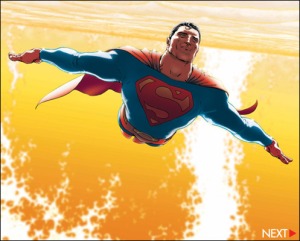 All Star Superman: Over his 75 year existence, Superman has been many things to many people, but to acclaimed comics writers Grant Morrison he is the zenith of all which is good. A utopian idea of a hero who always tells the truth and puts the needs of others before himself. With his frequent collaborator Frank Quitely, Morrison created his love letter to the Man of Steel with a tale man consider to be the greatest Superman tale of all time. Thanks to a scheme from Lex Luthor, Superman discovers his time is limited and he must maker the most of the time he has left with the people he cares about, especially Lois Lane. This heartfelt tale is filled with Silver Age fun and is a must read for any fan not just of Superman but of good stories in general.

20 thoughts on “Superman: The Essential Comics”