Over the past ten years I have been forced to endure three Superman movies which portrayed the Man of Steel as less super and more sad and moody. I know I am not alone in longing for the selfless, brave, and charismatic Superman that fans expect, the one that Richard Donner gave to us in 1978 with his classic film, Superman.

Before blockbuster superhero films were something that came out on a regular basis, Superman laid out the template that many successive films have followed. Strangely

because of the novelty of turning a superhero into the star of a feature length movie, this was a huge risk to the studios, even with that particular hero being one of the most recognizable icons in the world. Eschewing a complicated plot, Superman hits all the beats you would expect from a good Superman story and did so very well. Richard Donner wisely used most of the first half of the movie going over the origin of the character, and though that may be clichéd by now, at the time the filmmaker gave audiences something they had never seen before. In these scenes we are treated to legendary actor Marlon Brando’s portrayal of the Kryptonian scientist Jor-el. Brando perfectly captured a man who was emotionally torn, yet maintained the stoicism that was expected of a man of his stature, a surprisingly complex performance from a man who famously refused to learn his lines for the film. Much like Batman Begins and Spiderman, which both took its cues from this picture, providing this lengthy origin sequence helps the audience bond to the character outside of the costume, ensuring that once the action starts their mindset will be exactly where it needs to be as they cheer on the Man of Steel.

Having the audience care about a protagonist who is indestructible and righteous, could be a difficult task for the film were it not for the brilliant casting of the unknown, Christopher Reeve in the lead. With the looks of a Curt Swan drawing come to life, Reeve gave one of the greatest performances in cinema history as he donned the blue tights. Not only could he be dashing and charismatic as Superman, but he could also be the bumbling everyman in Clark Kent, convincing the audience that these could be two separate people. Perhaps what Reeve’s performance is remembered for is the humanity he brought to the part, sure he was the infallible hero in a cape, but there was a warmth in him, something that fans could latch onto. In a cast of heavyweights featuring; Brando, Gene Hackman, Margot Kidder, Jackie Cooper, Glenn Ford, and Ned Beatty; Reeve easily holds his own on the screen proving that he was worthy of the responsibility of putting on the cape. 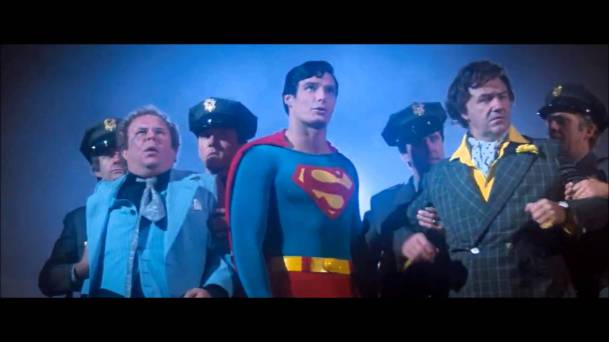 Of course the all-star cast assembled for this picture did not just lie back and let Reeve steal the show, as they all gave top notch performances in their respective roles. Giving the audiences a very modern take on Lois Lane, Margot Kidder, was pitch perfect as a daring reporter who did not take crap from anyone, yet still had and more vulnerable side that would bubble up to the surface from time to time. The villainous part of Lex Luthor was made to be a campier take on the conniving genius, and Gene Hackman embraced it with gusto. Hilariously insulting his cronies and plotting grand, almost nonsensical schemes, Hackman never ceased to entertain audiences, even if he is not the ruthless Luthor modern audiences are more familiar with.

Handling this epic of a film would crush an ordinary director, luckily Warner Brothers hired Richard Donner who with great confidence brought this story to life. In a film filled with; exploding alien worlds, men who could fly, and grand supervillains, Donner utilized a philosophy of verisimilitude during the filmmaking process. Basically what this meant was, everything that happened in Superman had to derive from the internal logic of the film. From world-building to keeping the egos of Hollywood’s A-List in check, Donner held everything together beautifully even if he did tragically lose the faith of the producers.

Over the decades Superman has become a cinematic classic which holds a sentimental place in the hearts of many cinephiles. Sure it has its flaws, but I defy you to not to feel a tinge of excitement in your soul when you hear the first few notes of John Williams’ classic score for the picture. Its influence on the modern filmmakers of the superhero genre is obvious as; Christopher Nolan, Sam Raimi, Jon Favreau and Brian Singer, have made their love of this film crystal clear in their own projects. In an era of film where audiences were packing theaters to see darker and grittier fare like; Taxi Driver, the Godfather, and the Texas Chainsaw Massacre; Superman gave them a movie about hope and optimism which made them believe that a man could fly.