Watching the Franchises I Hate: The ‘Percy Jackson’ Series

If you didn’t catch my first foray into pointlessness, here’s Transformers.

My interest in the Percy Jackson movie series at their time of release was…nonexistent. I hadn’t read the books and they blurred into the many ‘next Harry Potter’ attempts that were being flaunted about at the time (Eragon, Golden Compass, City of Ember and so forth). But I recently smashed through the book series, thought they were rad and curiosity got the better of me. Ironically it was The Dom’s series ‘Lost in Adaptation’ sledging the movies that put me on to the books, and I should have left well enough alone because the movies straight up suck. Let’s take a look…

Percy Jackson and the Lightning Thief

Right off the bat everything is wrong. And being wrong is what these movies do best. Small, incidental mistakes and huge big universe breaking mistakes…this movie has them all in spades. We begin with Poseidon walking out of the ocean, which looks stupid and is entirely pointless because the gods can appear wherever they want. He’s wearing ye olde style outfit, but switches to something modern but while in the book he dresses like a man enjoying a day fishing he’s wearing a pretty emo looking hoodie here. He gets together with Zeus and they talk about the big man’s lightning having been stolen and this potentially leading to war and Poseidon gets angry about protecting his son who he’s not allowed to see.

This is already totally bonkers wrong, because Poseidon not acknowledging his son is a big part of the books because Zeus, Poseidon and Hades have sworn a pact not to sire any more demigods, and having done so would be a cause for war. Plus this silliness about it being ‘illegal’ for Poseidon to contact Percy doesn’t work in the long run because the central conflict in the series comes from demigods feeling ignored by their godly parents – something that would be excusable if the gods weren’t allowed to contact them. Really shot yourself in the foot there, movie.

At the end of this discussion, Zeus leaves by going underground, which again makes zero sense because the sky is his realm and I doubt he’s going to crack a cold one with Hades. And I’m going to stop right here because I can’t dedicate this much article space to every tiny, nitpicking problem here. They pile up one after the other. Larger details like Kronos being skipped over during the visit to the Underworld, the flying shoes not being booby-trapped, Grover not bringing up his search for Pan and the back story behind Annabeth, Luke and Tahlia being overlooked would have screwed up the rest of the series if they sold enough tickets to continue it after one sequel.

Looking at it as a movie unrelated to the books there are some decent ideas in the mix. Casting Sean Bean and Kevin McKidd as Zeus and Poseidon is pretty good (Coogan and Dawson are less good as Hades and Persephone). Catherine Keener and Uma Thurman do well in supporting roles. Pierce Brosnon provided plenty of unintentional comic relief as a centaur because…it’s James Bond as a horse and there’s no way I can take that seriously.

As for the trio of kids at the forefront of the adventure, they’re clearly struggling with the atrocious dialogue that have taken the place of Rick Riordan’s words. It seems pretty clear that there’s little direction for them to work with, playing second fiddle to the CGI. Director Chris Columbus made a name for himself with the initial two Harry Potter movies, but that fame came with piggybacking the brand rather than any real innovation. His entries into the world of Potter were bland, filled with shonky CGI and featured flat performances that feel like table reads – it was only just good enough to carry the story. He seems to have approached this adaptation in a much lazier way, all of the same problems with little of redeeming features. Ultimately I find Columbus to be a very bland film maker. He does little more than set up a mid-shot and have the characters read their lines straight from the script while facing one another.

Story wise the movie makes plenty of stumbles as well. The big twist reveal at the end of the story gets telegraphed so hard in the movie you’d expect Hermes to show and deliver it. The strangest thing is the downgrade from the source material. In the end of the movie Percy faces off against an angsty teen with vague motivation…at the end of the book he faces off against ARES THE GOD OF WAR. They completely skipped over this climatic battle for no apparent reason. They also needlessly crowbar in a magical map they need to find magic pearls. In the source they just get given the pearls and don’t need a map to find L.A. Fleshing out the story and linking a few plot points together might have been OK but if they’d thrown in this silliness instead of a fight with Ares it’s a dumb move. They also cut out Clarisse, the hardcore no-nonsense daughter of Ares but then dumped her personalty and dialogue onto Annabeth, making that character a weird amalgamation of the two.

Missing: A God of War.

So that was disappointing, I’m sure it can’t get worse…

Percy Jackson and the Sea of Monsters

Oh good golly gosh it got worse. I found this book to be the weakest link in the Percy Jackson chain but even then the movie does a great disservice. If there’s one good thing to come out of this it’s the recasting of Chiron. I could not take Brosnon seriously with a horse’s arse, but the immensely likeable Anthony Stewart Head plays it well. Plus it’s also good to see him being Giles-ish again. He’s also dressed in modern(ish) clothing, a concept left out of the first film. This was especially annoying because the modern interpretation of the ancient characters is something I look forward to in the stories. They’ve also brought Dionysus into the stories, a welcome and reasonably well realised character.

This poor director has had to work over time to fit in all the stuff left out of the first film. The prophecy, Kronos and characters such as Clarisse all get jammed into the first act. Both Clarisse and Percy’s cycloptic half-brother Tyson both seem to have been struck by the pretty stick. They’ve gone from a tough, nasty tongued body builder and a gangly monster with a “brutal” face and giant, yellow teeth to teen mag cover stars. Apparently eye candy is more important than distinctive character traits because there’s little to seperate these two from the characters we’ve already got. The knowledge of mythology is equally poor across the two films though – the first one cast cerebus as three seperate dogs instead of a three headed one and this one pretends that cyclops’ aren’t all children of Poseidon. 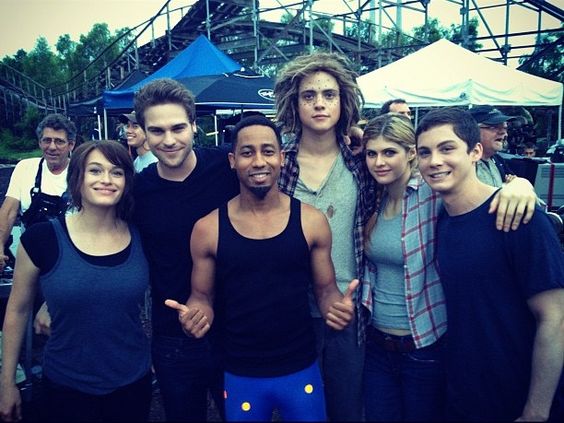 The big moment of this film should have been the first venture on board the Princess Andromeda, a cruise liner the size of a skyscraper floating on it’s side and absolutely swarming with monsters. Instead we get a yacht with about three people on it. It’s the most underwhelming thing since the cut Ares out of the first film. We also see Circe’s day spa swapped out for an abandoned amusement park, Polyphemus’ island reduced to a dingy cave WITHOUT any of the awesome killer sheep and, worse of all, NO PARTY PONIES. What kind of creative director would voluntarily cut out a hard of fratboy centaurs?

The performances of the young cast continue to be dire, this time without the talents of McKidd, Bean, Thurman and the like. The only compensation is Nathan Fillion’s Hermes and as much as we all love Fillion (and we do) he’s just not suited to the role. At least he brought George and Martha the bickering snakes with him. Worse than anything else is the CGI. An animatronic Polyphemus was created for the film and looks super awesome but they pasted over it with the same bland, fake looking CGI in every under-budgeted movie. Still, looks better than Percy and Luke surfing on fakes waves. 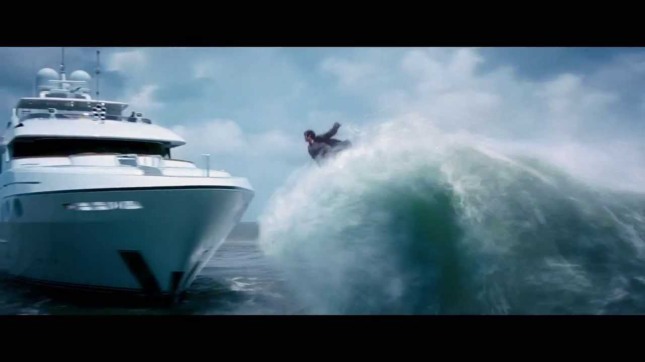 The most confusing aspect of this movie is the way it winds up. Perhaps the writing was on the wall and they knew the franchise was getting scrapped because they roll out big bad Kronos himself for the finale. This is the biggest baddest villain of the series and the battle with him only occurs after an epic 5 book build-up…instead they bump him off within about 2 minutes. It’s weak, but maybe they just wanted to round things out neatly. BUT THEN they drop in the epitaph featuring Tahlia being resurrected from the tree, a cliffhanger just aching for a follow up movie. But…Kronos is defeated? It’s entirely unclear what they were hoping to achieve with this.

Urgh, that was a waste of time. Go read the books.

2 thoughts on “Watching the Franchises I Hate: The ‘Percy Jackson’ Series”