This summer we saw the greatest superhero of them all make his triumphant return to the big screen in The Man of Steel. Being rebooted for a modern era has made fans remember just how cool Superman is and why he has remained popular after all these years. Many have forgotten that this was not the first time Warner Bros. has attempted to bring Superman back to the silver screen. Over the years many filmmakers have taken a crack at it. Tim Burton, McG, and Brett Ratner all tried and failed. But the studio’s prayers were answered when Brian Singer expressed enthusiasm at tackling the Franchise of Steel. Singer played a huge part in the renaissance of superhero movies with X-Men and X2: X-Men United, so the hopes were no doubt that he could bring his modern sensibilities to Superman. But Singer had other plans as he, being a huge fan of the Richard Donner films with Christopher Reeve, sought to do a sequel to the films that came before with Superman Returns.

It has been cited many times over that perhaps the biggest flaw of Superman Returns was, in fact, Singer’s love of the original movies. Any chance he got, Singer paid tribute to the first two Superman films, which gave the audience a feeling that they had been there and done that before. While he mimicked Donner at every opportunity, Returns lacked the charm and excitement that those movies held. It reminds me of the remake of Psycho, which copied Hitchock’s original frame for frame yet lacked any of the suspense and excitement of its predecessor.

With few action packed moments and a thin plot involving Lex Luthor acquiring land…again, it is up to the two leads, Brandon Routh and Kate Bosworth, to carry the movie. As many have pointed out before, Bosworth is terrible in the role of Lois Lane. As a character in the comics, Lane has always been a tenacious reporter who is just as tireless in the battle for truth and justice as Superman. But Bosworth does not give the audience, much less the Man of Steel, a reason to care about her. 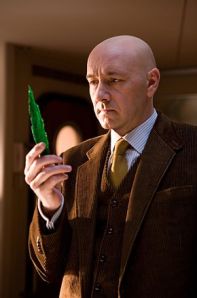 put a lot on the shoulders of the young and inexperienced Brandon Routh. All things considered, he did not do too shabby. Many claim he did not have the charisma or the screen presence needed to put on the blue and red spandex but he tried his best with what he had. Routh also had the obstacle of not being able to truly play Superman and instead was forced to play Christopher Reeve playing Superman. While on the topic of the cast, fans were on pins and needles that an actor of the caliber of Kevin Spacey was going to play Supes’ greatest foe. But just as Routh, Spacey was charged with playing Gene Hackman’s hammy interpretation of Luthor. In fact, when the villain stabs Superman with the Kryptonite shard in the climactic battle was the only time it felt like the kind of Lex, Spacey could have played.

As I mentioned previously, the plot was paper thin. Just as in the original film, Lex Luthor has concocted a crazed land scheme, but this time the plan is so absurd it makes nuking California look inspired by comparison. The discovery that Kryptonite and other crystals grow when wet leads Luthor and his henchmen to shoot the green rock into the ocean and create a new island. This comes to an end when Superman returns from a five year trip to Krypton, apparently he did not believe this crystal shard’s story all those years ago. In what is the biggest highlight of the film, Superman makes his grand return to earth by saving an airplane from crashing, and is welcomed with open arms and applause from everyone. Personally, it would make for a far more compelling story if Supes had returned to find the world more cynical and if the citizens of Metropolis held a grudge over his abandonment. He would have spent the movie trying to win their trust back. But I’m not a screen writer.

Upon his triumphant return he does little more than lift heavy things and creepily spy on Lois Lane. Speaking of which, we arrive at the DUMBEST element of the story. Superkid. This is a plot point that makes me wonder what the writers were thinking because, as comics legend Mark Waid has pointed out, there’s not really much you can do with it except ruin everything. Leaving a pregnant girlfriend behind makes the noble and moral hero look like a complete scumbag and sours the audience to the beloved hero. And if a sequel did come to fruition we would no doubt be treated to an episode of Jerry Springer over the paternity test results of the dumb kid. Aside from the airplane save, there is little to nothing in the way of action, and I am not saying this as an adrenaline junkie hoping to see some blood and beatings. But, as the Man of Steel showed us, cool action scenes in a Superman flick not only look cool but they grab the audience’s attention and gets them involved in the narrative.

Not all of Superman Returns is as bad as everyone makes it out to be. Being a fan of the original Richard Donner films, I enjoyed the more clever tributes to those flicks; even if Singer pounded it into the ground. Despite being given a thankless task, Routh performed admirably in the the iconic role, and his Clark Kent was one of the best interpretations of that aspect of the character.  And as far as the all-time great Superman moments, saving the airplane is definitely on that list.