It is almost cliched at this point to say that every good superhero is defined by his villains. But that does not make it less true. The best superheroes seem to have an entire rogues gallery custom made to bring out the best in them. During the history of the genre a few cabals of villains have proven to be the cream of the crop and given their respective heroes an embarrassment of riches in problems to overcome. These villains have no problem going to the greatest depths of depravity to accomplish their goals, and these are the rogues galleries we are going to look at right now.

Batman: This should have been a no-brainer inclusion for the list. The Dark Knight’s foes have become just as iconic as he has to the point that even non-comic readers know who they are. Rivalling Batman in popularity is strangely his greatest enemy, the Joker. The Clown Prince of Crime is the opposite of the Caped Crusader in every way, a sociopath who derives fun from bringing mayhem and leaving a trail of bodies in his wake. From murdering Commissioner Gordon’s wife to poisoning Gotham’s fish supply to killing the second Robin, the Joker has proven there is no depth of evil he will not sink to. Thanks to the animated series he is not alone as troubled former psychiatrist Harley Quinn is usually on his arm during his crime sprees. Her association with the Joker over the years has brought her to a level of popularity that she now stands on her own. Master thief Catwoman has proven to be especially challenging for Batman over the years, given his uncontrollable feelings for her, which she has had no problem exploiting to get her way. Eco-terrorist and botany expert, Poison Ivy is another member of Batman’s legendary rogues gallery who always presents a particular challenge to the Dark Knight. Given that Batman’s greatest weapon is utilizing his opponent’s fears it only makes sense that he has a foe in the Scarecrow who tries to one-up him in that department. The coin-flipping Two Face is always ready and waiting to remind Batman that the darkness in Gotham can even claim the mind and soul of his friend and ally Harvey Dent. While the Riddler may not be much of a physical challenge to the Dark Knight, he is always ready to push the hero’s mental prowess to the limit.

Spiderman: Another inclusion on the list that everyone should have seen coming. For years the Webhead has been Marvel’s top franchise and his colorful cast of villains is a big reason why. Whereas most heroes only have to worry about evildoers while in costume, Spidey’s archnemesis the Green Goblin makes his attacks personal. Their rivalry seemingly culminated with the murder of Gwen Stacey, but Harry Osbourne took up his father’s mantle until Norman Osbourne could return to wrecking Spiderman’s life. As if trying to protect New York was not hard enough, civic leader and former Daily Bugle editor J. Jonah Jameson has painted a portrait in the public’s mind that Spiderman is just a big of a menace as the crooks he stops. Testing Spiderman both physically and mentally is Doctor Octopus, who recently upped the ante in their long running feud by taking control of Peter Parker’s life as the Superior Spiderman. The alien symbiote, Venom which Spidey once wore himself has had no problem bonding with others, most prominently Eddie Brock, to cause trouble.

Superman: Being the hero who started the whole shebang and served as the archetype for so many other superheroes who would follow, it only makes sense that many of the Man of Steel’s biggest enemies would pave the way for others to follow. Of course there is criminal Lex Luthor who is arguably the greatest villain to the heroes of the DC Universe. From mad scientist to ruthless businessman to politician, Luthor has had the intellect to become whatever he needed to be to gain the upper hand in his quest to defeat Superman. A constant reminder of the dark side of Superman’s heritage in General Zod who is always a massive threat whenever he breaks free from the Phantom Zone. The villain Bizarro can make the claim that he was the first evil-mirror type villain in comics, a trend followed by the likes of Venom and the Reverse Flash. Considering there are those who consider Supes to basically be a god given his powers, there is always Darkseid to remind them that Superman has nothing on the Lord of Apokolips. 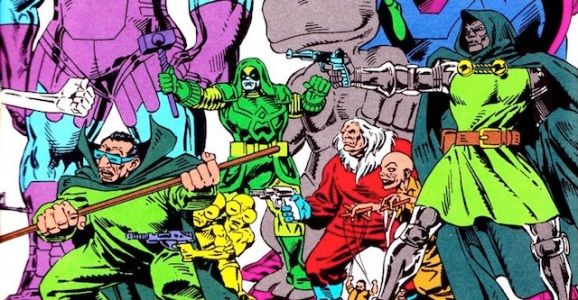 Fantastic Four: Though Marvel has played the role of the whiny kid who took their ball at went home with their first family, the Fantastic Four is still one of the most beloved properties in comicdom. At the top of their Rogues Gallery stands arguably the greatest villain in Marvel Comics, Doctor Doom. The leader of Latveria, Victor Von Doom is motivated solely by his hated for Reed Richards with whom he has shared one of the greatest rivalries in comicdom with. The appetite of Galactus the Devourer of Worlds, is a global scale threat which has forced Reed Richards to think big in order to save the planet. Never happy about being transformed into cows during their first attempt to conquer earth, the Skrulls have always had a vendetta against the Fantastic Four. Beneath the surface of the earth is the Mole Man, who always lies in wait to emerge from beneath the ground and wreak vengeance on us surface-dwellers.

Thor: It takes the strongest of villains to challenge a god, and those who oppose the Son of Odin know they have to take things to the next level. Thanks to the success of the Marvel Cinematic Universe, everyone knows that a constant foil for Thor is his own brother Loki. A master of deceit and trickery, Loki reliably causes trouble for his brother as a master manipulator. Even when Thor has had to ally himself with the God of Mischief, that mistrust is always present. A more recent edition to Thor’s rogues gallery is Gorr, the self-proclaimed God Butcher who has travelled across the universe on a personal mission to wipe all deities from existence. Proving that all elves are not noble and wise is Malekith the Accursed, the Dark Elf sorcerer is always a source of trouble across all of the nine realms. Given that Thor is quite the macho hero, it is only fitting that the seductive Enchantress always knows how to exploit his weaknesses. And of course she always has the Executioner by her side for when Thor is ready to come to blows.

X-Men: Life as a member of a persecuted race is hard, it’s even harder when you have supervillains to deal with. Ever since Professor Xavier decided to utilize those under his mentorship to battle for equality, Magneto has been there usually as a threat to be reckoned with. As the ideological opponent to Xavier, he too has had the ability to gain followers to fight for his cause with the Brotherhood of Evil Mutants. Over the years their ranks have included the likes of; Mystique, Avalanche, Toad, the Blob, and even Rogue. Of course the Brotherhood is not the only society who cause trouble for Marvel’s Merry Mutants as the secretive Hellfire Society is always lurking as a threat waiting to strike. The mechanical giants Sentinels have a tendency to stomp around the Marvel Universe programmed only to contain and eliminate the mutant threat. Things get tougher for the X-Men when they have to deal with villains who bring their struggle to a much grander stage, like Apocalypse or the Dark Phoenix.

The Flash: What sets the Flash’s gallery of evildoers apart from the rest, is their tendency to join forces. Often led by the Scarlett Speedster’s arch rival Captain Cold, and often including; Heat Wave, Golden Glider, the Trickster, Mirror Master and others, the Rogues are a criminal fraternity in Central City. While they may have a code of conduct they adhere to, this does not stop the fact that they are criminals first and foremost. No matter who has worn the mantle of the Scarlett Speedster they have had to contend with an evil speedster as part of a strange tradition from the Rival to Eobard Thawne to Hunter Zolomon, these Reverse Flashes always nullify the hero’s greatest strength. For a while, the villains who contended with the Flash were seen as campy jokes from a bygone era, luckily Geoff Johns and artist Scott Kolins were able to find a way to modernize these villains and make them memorable for a whole new generation of comic book fans.