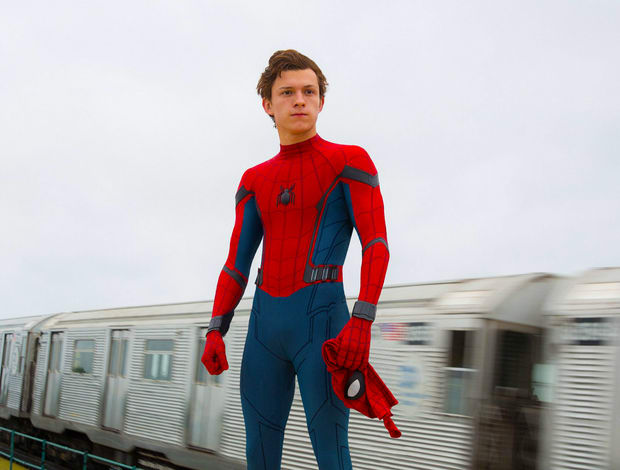 Plot:  Following the events of Captain America: Civil War, Peter Parker/Spider-Man (Tom Holland) returns home to Queens and becomes frustrated with just being your “friendly, neighborhood, Spider-Man.”  When not pining for crush Liz (Laura Harrier) or hanging with his best friend Ned (Jacob Batalon), the high school sophomore is stopping petty crimes, and constantly phones Happy Hogan (Jon Favreau) hoping Tony Stark/Iron Man (Robert Downey Jr.) will give him a task more substantive than stopping muggings.  Peter unexpectedly gets his chance when mysterious criminal Adrian Toomes/Vulture (Michael Keaton) appears on the scene.  Confident he’s up for the challenge, Peter soon finds he may be in over his head.

Entertaining, fast-paced, and led by two excellent performances from Holland and Keaton, Homecoming proves to be a strong, if slightly formulaic, summer popcorn flick.  Shirking the typical origin story, Spider-Man: Homecoming goes slightly against the grain by emerging the audience in the world of an already established Spider-Man. Spider-Boy might actually be more appropriate because–in a truly collaborative effort–the six (!) screenwriters finally deliver what Spidey fans have wanted for years.  Namely, a Spider-Man navigating the intricacies and pitfalls of high school.

Spider-Man: Homecoming in some aspects is a throwback to the teen movies John Hughes put out in the 1980s.  I hate the term “coming of age story” but it fits here.  We see the worst of high school (clicks, petty jealousies, unrequited love) and the best (the best friend who “gets” you, finally scoring a date, and class trips).  Furthermore, director Jon Watts (whose previous credits only include Clown and Cop Car) conveys the angst, joy, and frustration of being a teenager.

It helps that Tom Holland is believable as a teenager, which is due in large part to his age as he’s only twenty-one.  But aside from looking the part of a fifteen year old, he perfectly captures what it’s like to be a teenager.  Holland is hands down the best Peter Parker/Spider-Man we’ve seen on the big screen.  He owns the role.  Watts’ vision fits hand in glove with Holland’s performance.  Furthermore, Homecoming and Holland’s Peter Parker make a strong case as to what it would be like for a teenager who suddenly finds they have super powers.  Peter is young enough and optimistic enough that he doesn’t question or doubt himself, unlike in recent films like BvS.  He’s just happy to be there and desperately wants to be an Avenger.  It’s that attitude that ultimately gets Peter into trouble as a fantastic showdown on a ferry between Vulture and Spider-Man demonstrates.

Speaking of Vulture, finally Marvel delivers an interesting and strong villain other than Loki and Ultron.  In fact I’d hazard to say that next to Loki, Keaton’s Vulture may be one of the best villains Marvel’s put out to date.  Why Adrian Tooms/Vultures works as a villain results from his circumstances.  He’s not a demi-god like Loki, he’s not an evil A.I. like Ultron, he’s not a sociopath like Red Skull–he’s just a normal dude who got screwed by the system.  He’s a working class, honest guy who was cut down by billionaires like Tony Stark.  Consequently Toombs chooses the “if you can’t beat ’em, join ’em” path, stealing Chitauri technology to sell advanced weapons.  Keaton’s Vulture isn’t doing it to rule the world though, he’s doing it to feed his family.  The Oscar nominee (Birdman) provides a fleshed-out, multilayered villain.  It’s far more interesting than “he’s evil because reasons.”

Holland and Keaton make for a great hero/villain combo.  Their chemistry is spot on.  What’s truly compelling is that the best scenes between the two aren’t even action scenes.  There’s two in particular towards the end that are loaded with subtext and intrigue.  Both scenes explain why Vulture is doing the things he does but it’s not dripping with exposition.  There’s the dichotomy of age versus experience.  Peter sees the world in black and white, right and wrong, good and bad.  But Keaton’s character doesn’t fall into that neat little binary.  He’s a villain with shades of gray, one that you sympathize with while you root against him.

Don’t get me wrong, Homecoming isn’t all deep dramatic moments.  There’s plenty of great action sequences.  A scene where Peter has to save his friends at the Washington Monument was particularly memorable.  These moments are punctuated by another great score from Michael Giacchino (Rogue One, The Incredibles, Star Trek).  While he’s not in the John Williams/Hans Zimmer category yet, he’s certainly on his way.  Giacchino’s score melds well with Salvatore Totino’s cinematography, who captures intense action sequences and intimate dramatic moments with equal aplomb.

On another positive note, Homecoming sports a solid supporting cast.  Favreau gets way more screen time than you’d expect as Happy Hogan.  Being constantly harassed by Peter makes for some funny moments.  Zendaya plays an awkward but intellectual classmate of Peter’s as the sarcastic Michelle.  She’s clearly obsessed with Peter but masks it with her biting wit and sarcasm.  Not bad for a woman known mostly for her roles on the Disney channel.  Peter’s best friend Ned steals every scene he’s in whether it’s wearing Peter’s Spidey mask or getting caught by a teacher helping Spider-Man remotely.  Just as Peter is happy to be Spider-Man, Ned is overjoyed to be “the guy in the chair.”  Even Martin Starr (Freaks and Geeks) provides a few choice moments as the clueless Mr. Harrington, Peter’s teacher and academic decathlon coach.

I do have a few gripes with Spider-Man: Homecoming.  Marisa Tomei as Aunt May is severely underutilized and honestly too hot for the role.  Laura Harrier’s portrayal as Liz, Peter’s love interest wasn’t very compelling either.  And while I appreciated the few scenes RDJ was in as Tony Stark/Iron Man, promotional materials made this seem like a team up movie which it most definitely was not.  Maybe that’s for the best though since the movie is SUPPOSED to be about Spider-Man.  Speaking of Tony, there were several deus ex machina moments where he just happened to show up and save the day that were a little too convenient.

My biggest criticism however isn’t so much a dig at Homecoming, but directed towards Marvel as a whole.  Specifically that the film is too formulaic.  We’re sixteen movies in when it comes to the MCU and they’ve started too feel very pat and familiar.  Yes Homecoming is very entertaining, but it doesn’t break new ground either.

However, this should in no way detract from the fact that Spider-Man: Homecoming is exactly what you expect it to be:  a damn fine time at the movies.