When I began this saga long ago I did not know how long I would be writing this series. Luckily we live in a mysterious and terrifying world filled with mysteries giving me no shortage of terrifying mysteries to write about. Submitted for your approval, here is the latest edition of Five Creepy Unsolved Mysteries. Once again feel free to browse through the archives below.

UFO at Falcon Lake: When Stephen Michalak decided to take a camping trip to Falcon Lake Provincial Park in the spring of 1967, he never imagined he would encounter something that would leave him scarred for life. While on his trip Michalak spotted two silver saucers in the skies, upon being seen one of the objects sped off into the distance while the other began to make its descent. Naturally curious, the man made his way to the aircraft. As he got nearer a door on the craft opened and Michalak claimed he heard voices from within, but as soon as he touched the mysterious object it flew off and the energy it emitted burned the shirt he was wearing. For getting too close to a visitor from another world, Michalak was rewarded with burns on his abdomen in a grid pattern. Doctors and researchers were baffled as to what could have caused these burns, and also struggled to come up with an explanation for the constant bouts with nausea that the man now had to deal with. When Michalak took researchers to the landing site where all of this had happened, and they discovered that the area had a mysterious low level traces of radiation. Sadly Michalak lived out the rest of his days a victim of the aircraft he encountered and carried the burns with him for the rest of his life.

The Demons and Christine Walker: In the fall of 2008 Christine Walker was found naked and bleeding profusely on a stranger’s doorstep in Eureka, California. She was taken to a local hospital but the petrified woman refused to tell anyone what had happened to her. The young woman had moved to California 4 months prior after falling in love with the state’s natural beauty, leaving her mother behind in Wisconsin. While living out west she had fallen with a group of friends who were heavy into New Age spiritualism, and she confided in her mother that the night before she turned up in her battered shape she joined them in a ritual in the forest where they inadvertently summoned demonic creatures that pursued her through the woods that night. Upon leaving the hospital, Woods told her mother she was coming back home but she had to be careful because these same demons were stalking her to finish what they started. Sadly she never made it back to Wisconsin, just two days after her horrifying incident, Christine Walker left her ID, backpack, and other belongings in a coffee shop and walked off never to be seen again.

Circleville Writer: Mary Gillespie was just a regular woman in the small town of Circleville, Ohio in 1976. She was a wife and mother who made a living driving the local school bus. But for reasons unknown she earned the ire of a letter writer who remains a mystery to this day. It began when many of her; friends, family members, and fellow townspeople, began receiving anonymous letters accusing Mary of having an affair. This embarrassing ordeal was not the end, as the self-proclaimed Circleville Writer, continued to send handwritten letters to everyone in town threatening Mary Gillespie and her children, all the while showing that they knew a good many details about her life. The Writer continued to threaten her, saying that if she did not admit that she was having an affair with the school superintendent he would make her life miserable. The following year her husband received a mysterious phone call which caused him to grab his gun, hop into his car and drive off. He was discovered, dead in his car with a high blood-alcohol level. Forensics determined that his gun had been fired, but they could not tell by whom. Even after Mary confessed to the affair the Circleville Writer continued for another six years to torment the poor woman. At one point her brother-in-law was thought to be the suspect and was arrested, but while he was in solitary confinement in prison the letters kept coming. Then abruptly the Writer stopped and to this day the identity of the person/people who made life a living hell for a seemingly ordinary citizen is unknown. 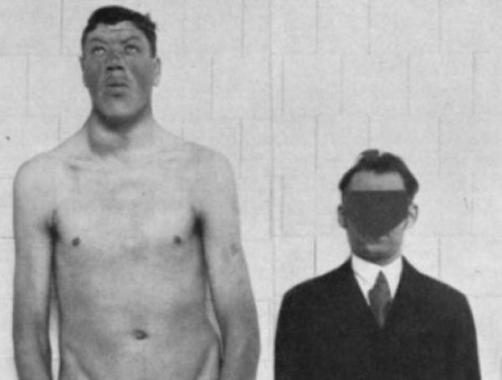 Adam Rainer the Biggest Small Man: By the time he had reached adulthood, Austrian-born Adam Rainer realized he was incredibly small for his age. In fact by the time he was 20 years old he only stood about 4.8 feet tall, and by some accounts he was even smaller than that. But on his 21st birthday something strange happened to Rainer, his health began to deteriorate but he began to grow. Over the years that followed, the man grew to be 6.9 ft tall; he had lost his eyesight along with his desire to eat and move all that much, and his facial proportions were growing out of sync with the rest of his body. The problems he was experiencing is usually attributed to problems the pituitary gland, and it was operated on. Unfortunately this did not stop the growth as Rainer became close to 8 feet tall and bedridden. The source of his sudden and strange growth from such a small stature remains a medical mystery.

The End of the Masked Marvel: Before the days of crisp CGI and nine figured budgets, the way superheroes and pulp figures were presented onscreen was in the serials. Moviegoers delighted in the adventures of; Buck Rogers, Batman, Superman, Flash Gordon, and in one particular adventure the Masked Marvel. Premiering in 1943, the Masked Marvel became a boost to the career of young actor David Bacon. Sadly further success was not to be obtained as later that year, Bacon was seen driving his car off the road in Santa Monica where it crashed and the actor stumbled out in nothing but a swimsuit and fell down dead. Lodged in the actors back was a large knife, which assuredly killed him. Inside his car, police found a camera with a single picture on the film of the actor on the beach, believed to have been taken by his murderer. As the investigation unfolded many of Bacon’s secrets came to life; according to his wife he was a closeted homosexual who had spent a good amount of his earnings to rent a house for his secret lover with whom he may have been driving around with that day. But the identity of this man was never found out, and to this day the murder of this rising star remains unsolved.