For those who have not been keeping up with the comic book industry lately DC Comics has shed the controversial move of the New 52 and are dominating the charts with not only their Rebirth, but also by diversifying their entire publishing line. They brought a fresh spin to the Hanna-Barbera franchise and they have given rock-star Gerard Way his own line of comics to tell quirky and unconventional stories. The books in the Young Animals line may take place in the mainstream DC Universe definitely have a Vertigo-esque feel to them. Now that the debut issues for each series in this publishing line are on the stands let’s look at the first issues to see if they are worth putting on your pull list. For the record I am not particularly a fan of Gerard Way’s band My Chemical Romance, but books such as Umbrella Academy have proven that Way knows how to write a comic book. 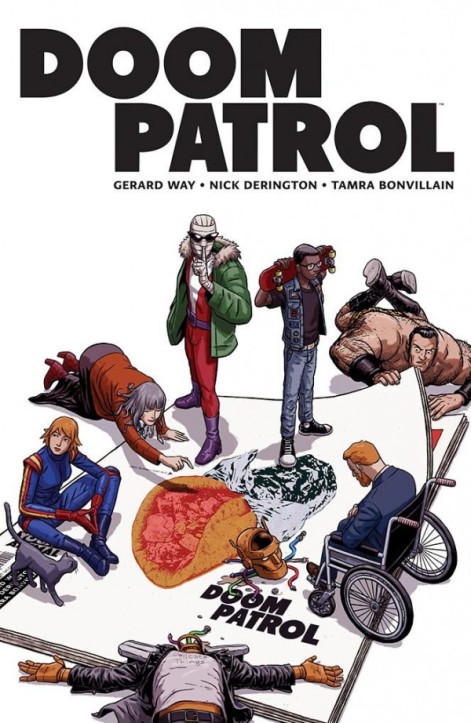 Doom Patrol: The flagship title of Young Animals is a fresh spin on DC’s lovable band of misfits the Doom Patrol. Drawing inspiration from Grant Morrison’s historic run, Gerard Way and artist Nick Derington have brought a strange yet fascinating take on this team of superheroes. Given the fact that this title has always been a cult favorite rather than a Diamond best-seller, Way and his team were smart to give us EMT Casey as the protagonist in this first issue to give newcomers a window into the world inhabited by Niles Caulder, Robotman, Negative Man, and the rest of this beloved team. Though it may be hard to follow for the uninitiated, for those willing to put in the work this has the beginnings of a masterpiece of a comic.

Mother Panic: In the past couple of years there has been approximately a bajillion comics about Batman and his Gotham crew, which mean when a comic comes and puts a different spin on the legendary Gotham City it is worth taking note of. From writer Jody Houser and artist Tommy Lee Edwards, we have the tale of Violet Paige, who on the surface is a Gotham celebrity heiress who in a fast-paced debut issues has returned to her hometown to exact her vengeance as the vigilante Mother Panic. Edwards provides artwork which is gritty and violent yet still fantastical while Houser gives us a compelling and fresh story about the newest cape in Gotham.

Cave Carson Has a Cybernetic Eye: There was a time when Cave Carson and his family were dashing explorers of the unknown, partaking in adventures and battling the unknown. But that was years ago, now Carson’s wife has passed away and his daughter Chloe has gone away to college. As the once legendary adventurer deals with his midlife crisis his cybernetic eye malfunctioning (or is it his mind playing tricks on him). This is a fresh new take on the old pulp hero formula and I can not wait to see where it goes.

Shade the Changing Girl: One of the biggest hits for Vertigo during its Golden Age was Peter Milligan and Chris Bachalo’s Shade the Changing Man a fresh take on an old concept. It makes sense that the newest line of comics to encourage quirky and unconventional story telling would carry this torch for a new era. Shade the Changing Girl follows Loma Shade from the planet Meta and the latest wearer of the Madness Coat. As the great Kyle Pinion put it; if Doom Patrol was the smart punk bands of the 70’s and 80’s Shade the Changing Girl is one of the poppier acts of the genre. The star of this book so far is artist Marley Zarcone, who brings a unique vision to this series unlike anything else on the comic shelves today.