Movie Review: ‘Fantastic Beasts and Where to Find Them’ (Second Opinion) 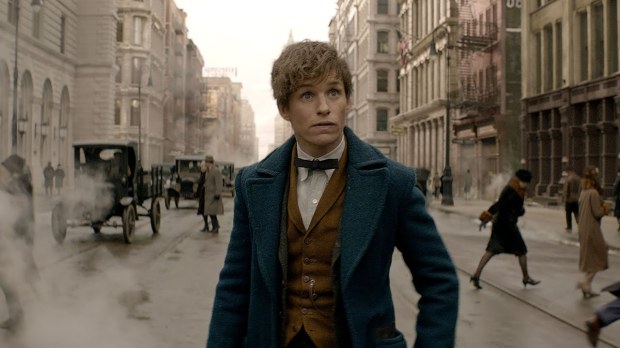 Plot:  Set in the Harry Potter universe, Fantastic Beasts sees wizard Newt Scamander (Eddie Redmayne) travel to NYC en route to Arizona in order to return a Thunderbird to its native habitat.  Unfortunately, due to an unfortunate suitcase swap with no-maj (the American version of muggles) Jacob Kowalski (Dan Fogler), several of his beasts escape to wreak havoc on the Big Apple.  At the same time a mysterious force known as an Obscurus is also destroying various areas of NYC.  Newt struggles to recapture his beasts along with American ex-auror Tina Goldstein (Katherine Waterston) while also trying to avoid the Magical Congress of the United States of America (MACUSA) and Director of Magical Security Percival Graves (Colin Farrell).

Review:  Harry Potter was one of those book series that took awhile for me to get into.  I always thought it was too childlike and seemed just a fad.  However, after much urging from my Mom I read the first book and was immediately hooked.  When the films came out I was more than impressed.  I thought the adaptations were very faithful and the casting was great.  In fact I don’t think Harry Potter gets enough credit for being one of the most consistent movie series of all time.  (Seriously, eight films and not one of them is less than a 7/10 in my opinion.)

Having said all this, I was not impressed with Fantastic Beasts and Where to Find Them.  That’s not to say the film is bad, it’s just mediocre and along with Batman: The Killing Joke, probably the most disappointing film I’ve seen this year.

One of the reasons that the Harry Potter series did so well was the result of impeccable casting.  Rupert Grint, Emma Watson, and of course Daniel Radcliffe were perfectly cast, possessed amazing chemistry, and developed as characters with each passing film.  The same can not be said for the cast of Fantastic Beasts and Where to Find Them.  Usually reliable Eddie Redmayne comes across very vanilla as Newt Scamander.  Apparently Scamander is an introverted wizard, but for some reason I just didn’t like the portrayal.  Redmayne didn’t carry the film and his “aw shucks” personality felt surface deep.  It’s unfortunate because Redmayne is one of the best actors working today.  Also, and granted I know this is a movie about wizards and witches, he’s a HORRIBLY inept wizard.  How do you not fix the latch on your suitcase?  You are a wizard!  You have magic!  This isn’t hard.

If there was supposed to be chemistry between Scamander and Tina, director David Yates dropped the golden snitch big time.  It felt stilted and awkward, especially their final scene together.  “Stilted” and “awkward” are apt words to describe the plot of the film overall.  I just found it incredibly boring.  In fact at one point I fell asleep in the theater for a bit which NEVER happens.  J.K. Rowling’s script was basically, “Hey some magical animals got loose and let’s catch them and oh by the way I think  Gellert Grindelwald may be involved.” The whole plot just seemed very pat, bland, and by the numbers.  Again like Redmayne, it’s a disappointing turn by Rowling who is otherwise an excellent writer.  If you haven’t checked out her Cormoran Strike novels under the pseudonym Robert Galbraith, you’re missing out. 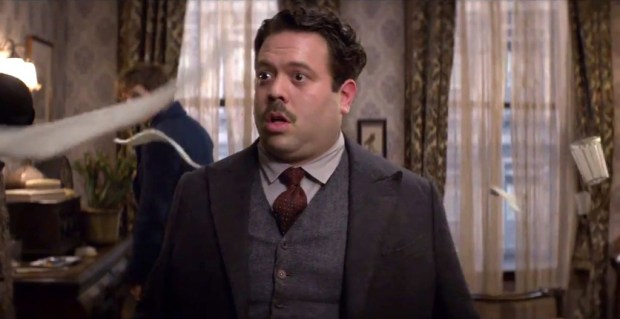 It occurs to me that I’m painting Fantastic Beasts in a terrible light and it’s far from a bad movie.  Although uneven, it is at times entertaining.  I loved Colin Farrell’s portrayal of Percival Graves.  He’s equal parts chilling and bureaucratic.  Additionally, Dan Fogler kills as would be baker Jacob Kowalski, the no-maj who’s caught up in Scamander’s escapades.  He’s a loveable schlub out of his element and while that’s a bit of a tired trope, it works nonetheless.  The romance between he and Tina’s sister Queenie Goldstein (Alison Sudol) was endearing and (sadly) the best part of the movie.

From a visual standpoint Fantastic Beasts ranks right up there against any of the Harry Potter films.  The production design team did a fantastic job of re-creating 1920s New York City.  Ditto the costume department.  I have no doubt Fantastic Beasts will be nominated for Oscars in both of those categories.  The wand duels are equally impressive, especially the final climactic battle and the beasts themselves.

Also from a social commentary perspective, I loved the idea of the Obscurus, which is essentially an evil entity that comes to fruition when magical children suppress their abilities.  I won’t ruin what character this pertains to in the film, however it’s a great metaphor for “hiding your light under a bushel basket.”  While the obvious corollary is the devastating emotional effects of repressed homosexuality, the Obscurus could represent a plethora of things.  Anyone who has ever been browbeaten into hiding their artistic talent, or been chastised for switching religions, or even ridiculed for being a Star Wars fanatic, I think can relate to the Obscurus. 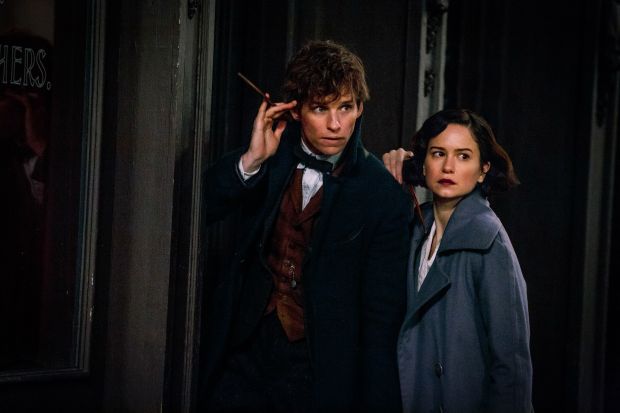 For better or for worse audiences are headed for four sequels to Fantastic Beasts, the next scheduled to hit in 2018.  Obviously I have no idea what direction Rowling and company will take this franchise, however I question whether Redmayne will be able to carry this through another four movies.  I think the best direction to head in would be to play up the conflict with Grindelwald and Dumbledore and by many accounts, this sounds like where they are headed.

As for the first entry in this franchise, Fantastic Beasts and Where to Find Them while occasionally entertaining, underwhelms on the whole.

You can follow me on Twitter at @DarthGandalf1 and for the latest movie, television, and other relevant news geeks love, visit my Facebook page at https://www.facebook.com/flicktasticmovies

4 thoughts on “Movie Review: ‘Fantastic Beasts and Where to Find Them’ (Second Opinion)”