With Oz Comic Con season right around the corner here in Australia, I thought I might give you all a long overdue treat. Last year at Oz Comic Con in Perth we had the opportunity to interview the authors in attendance at the con, including Kylie Chan, but due to some technical difficulties and some life-related obstructions, I’ve only just been able to transcribe them for you now.

We sat down with Kylie Chan again (you can check out our previous interview with her here), and we’re very fortunate again this year Perth, because she’ll be returning to Oz Comic Con in both Perth and Adelaide in 2017. And after a quick discussion about our site rating, and some entertaining story swapping, we jumped straight into it! 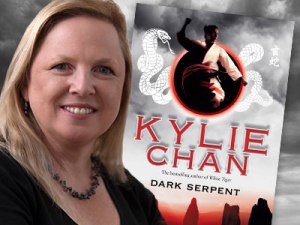 Appa the Gypsy: Well, I suppose I should welcome you here to Perth at Oz Comic Con. You’ve visited us quite a few times in the past few years.

KC: Having people that normally I don’t get to talk to, my fans, who know about the stories of the books. So people come up to me and ask me detailed questions about plot points or characters, and I get to talk about my books. My kids are profoundly not interested in my stories, so it is just lovely to be able to talk to the fans about my own stories and share details about the characters and plot. Love it!

AtG: Yeah, you can get quite specific questions, quite nitty-gritty stuff. 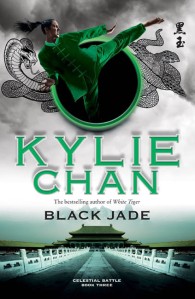 AtG: Okay, that’s pretty interesting… So. The final book in the Dark Heavens series is coming out later this month, isn’t it? (Black Jade was released in April 2016 in Australia)

AtG: So, when we last did an interview with you, we talked about what was coming up next for you, and you said it was looking like “steampunk samurai time-travel explosions” but I’ve obviously been to your panels and I know that’s not quite the case, so do you want to tell us about what’s up next?

AtG: And as you say, you don’t need much more selling point than “space dragons”.

AtG: So, you and I were having a bit of a chat earlier about your Masters, and the differences between traditional publishing and digital publishing. Do you want to give us sort of a bit of an idea of what it is you’re researching into? 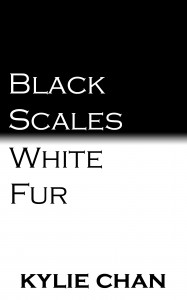 Another digital release novella, The Gravity Engine can be read as a stand alone or as a link between Journey to Wudang and Demon Child

AtG: Do you get a lot of feedback from readers saying ‘I read the free online book and now I’ve read everything you’ve written’ or anything like that, or do you not really hear back necessarily that much?

KC: No, I don’t hear back that much. It’s only the real die-hard fans who email me. I love it when I get an email from someone who loves my books! If someone hates my books they won’t email me to say, so thank you very much, I appreciate it (laughs). I’d rather not hear that you hate my books. Yeah, it’s usually someone who’s read all of them and they’re frantic for the next one that will email me and say ‘where is it?’

AtG: Yeah, I know for me, I read all of your books after just meeting you at a convention, years ago now, and just hearing you talk about them, I was like this sounds awesome! And so that’s what made me pick them up. So perhaps you’re your own best selling tool, really.

KC: I think I am. I used to have an MBA, I used to work in business, so I’m good at talking to people. And as I said in the panel, I originally designed my book as a product, as a business product, for purchase by readers, and it’s grown from there, I’m proud of my art, but I still write for my readers.

AtG: Very cool! So, away from the more serious in-depth things… So, I know you’ve done a little bit of martial arts.

AtG: And some of your characters also do some martial arts. So, if not god-powers were allowed, do you think there’s any characters in the books that you think you could probably take in a sparring match?

KC: No. Absolutely not. No, I’d get my ass so handed to me. Number one, I’m not terribly good. Number two, I don’t have the time to train really thoroughly. And number three, I’ve done my shoulder and I can’t really train at all right now. Yeah, I’m very much out of practice.

AtG: Which obviously doesn’t happen to gods necessarily that much!

KC: No! Gods don’t do their shoulders. In fact, no one on television would be like… you wouldn’t see a character on the TV say ‘oh, crap, I’ve done my shoulder. Tendon’s gonna take a few months to heal, so I have to stay off it’.

AtG: Certainly wouldn’t happen to Xena, would it?

KC: No! No, real life people take a while to recover from this sort of thing.

AtG: They do! So, if you could take off your author hat for a day and get to hang out with just one of your characters, who do you think it would be and why?

KC: I think Gold, because he’s a blast.

Small Shen is a graphic novella which tells a prequel story about Gold, one of Kylie’s favourite characters

AtG: In terms of characters, do you find that there’s any particular characters that are really, really difficult to write, and some that just kind of flow onto the page?

KC: Ah, no, all my characters are easy to write. They have their own voices. The White Tiger keeps jumping into the story and taking it over… so I have to keep him a little bit controlled.

AtG: He’s a bit of an attention seeker.

KC: He is! Well, he was only supposed to have a small walk-in part in book one, and he just took it over and made the title about him.

AtG: Which of your characters do you think has the coolest powers?

KC: They all have similar powers, so it’s not really a superpower question… I just like John because he’s so weird. Xian-Wu is a turtle and a serpent combined and in the final novel, he is the two combined reptiles, and he keeps just freaking everybody out around him because he is so very weird. He has the extra power of freak-out!

AtG: Definitely! And he seems so sure in his power all the time too, so he seems pretty all-powerful.

AtG: So we’ll wrap it up, because I can see you’ve got some people who are lining up, but I’ll ask you one more question… Lots of authors talk about how it’s so important as a writer to read and to read a lot, do you have any particular book recommendations or author recommendations that you would like to share?

AtG: Sounds like it would be pretty great to read.

KC: It is really good.

AtG: Well, thank you for taking the time to talk to us today.

AtG: It’s always so lovely to come a speak with you.

AtG: Well, we love you pretty solidly here too, so I hope that you managed to get some extra stock to take to Adelaide to give them some books!

KC: Yes, I’ll work something out.

AtG: We’ve just about bought you out.

“ Kylie Chan is the best-selling author of the Dark Heavens, Journey to Wudang and Celestial Battle trilogies, which tell the story of Emma, an ordinary Australian woman thrown into the world of Chinese Gods, martial arts, and magic. Emma must deal with a bewildering variety of Chinese mythological creatures from dragons to the Monkey King as she learns martial arts from her employer John Chen, who is really the God of Martial Arts, Xuan Wu.”

You can find out more about Kylie and her books on her website http://kyliechan.com/