Arthur Darvill is a man without much time on his hands. When he isn’t composing music, performing on stage or practising magic tricks he’s travelling through time in some of the best science-fiction time travelling adventures seen on TV. When he came to town for Oz Comic-Con we took the chance to catch-up with the man out of time!

Enjoy the audio or transcribed version below! 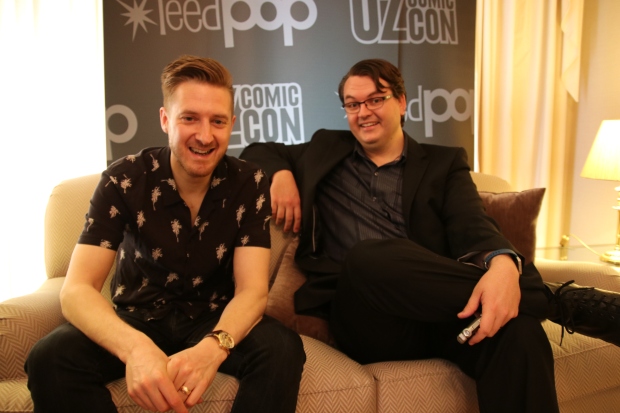 G-FUNK: We’re the House of Geekery and we’re here for Perth Oz Comic-Con and we have Arthur Darvill with us today.

GF: Hello! And how will people know you?

GF: If they turned their TV on, would they know you?

AD: Oh, right! They may know from Such Programs As Doctor Who and Broadchurch and Legends of Tomorrow and other things.

GF: Those are good shows.

AD: Thanks. I’ve been really lucky.

GF: I’ll get into those in a sec…do you mind being a Guiana pig for a question?

AD: I’ve always wanted to be a Guiana pig.

GF: Brilliant. I’ve got a question I always wrap up interviews with but I want to try a new starting question. You do a lot of press, a lot of media interviews…

GF: Is there a question you’re sick on hearing?

AD: Noooooo. But there’s a question…because I do a lot of time travel stuff people ask me ‘if I could travel in time where would I go to’ and I try and say different answer every time, so I never tell the truth.

GF: Can we get the truth?

AD: I probably wouldn’t because I’d be terrified of messing anything up.

AD: Yeah. I’d go to, like, yesterday. I had a really nice lunch yesterday, so I’d ‘relunch’. I think that’ll be the safest option.

GF: I like that answer. A good lunch…you can’t replay a good lunch.

AD: No, you can’t replay a good lunch. 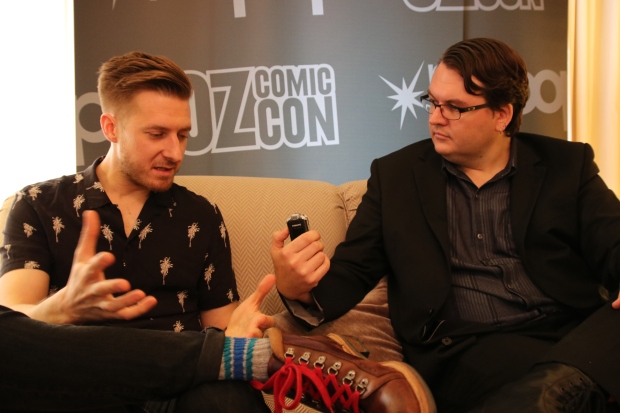 GF: Do you think that’s an alright question to start interviews with?

GF: Cool. On to some real interview questions. You played Rory Williams on Doctor Who along with Matt (Smith) and Karen (Gillan). Rory seemed to pop up occasionally and then he became a regular feature. Did you know that was the plan for him or did it happen more organically?

On set with Smith and Gillan.

AD: They didn’t tell me anything. I thought I was signing on for six or seven episodes and ended up doing three years. Stephen Moffat always told me that was the plan, but he never told me that was the plan. I was always very grateful when I saw a script and my name was in it. It was an amazing journey to go on as a character. When I got the job…it’s shrouded in so much secrecy. Even the script I auditioned with was a made-up script. There was little bit of what was in my first episode but most of it was fake so nothing got out about what actually happens in the show.

GF: The way you say it, that when you get a script you’d be happy to see your name in it, that implies that sometimes you got scripts without your name in it. Were they just winding you up?

AD: (Laughs) No, no, no, they didn’t do that. But because my character died quite a lot I think they were very good at making sure I knew that I wasn’t actually dead and I wasn’t out of a job. That was good.

GF: A couple of my film students wanted to know if you had a favourite death in the show?

AD: I liked the fake death…there was one death, (laughs) this is ridiculous…I got zapped by an old lady and turned into sand? I got to watch my hand disappear and turn into sand. It was a bit like the scene in Back to the Future where Marty’s hand disappears and I like having a little bit of that.

GF: It seems that you have a bit of an affinity for time travel stories.

AD: I do have a bit of an affinity with time travel stories, yeah!

GF: You had Rory and then you went to Rip Hunter…

AD: It’s the only thing I can do. Time travel.

GF: I couldn’t help seeing…the first time we saw you as Rip Hunter with the coat and the witty banter and the mission…it kinda felt like you were stepping into the Doctor’s shoes.

GF: Did it feel like you were taking that role on?

AD: It did a little bit. When I got offered the job I said to them, (stage whisper) “this is very similar to…” Then they said to not worry about it, it’s going to start like that and then it’s going to turn into something else. Which it has, which I’m really pleased about. But there were echoes at the beginning, which I embraced actually, and I think they’ve done such a good job of taking the show from what it was and turning it into what it is now, which is a really unique place in television. It’s a really funny, odd, comic book show. It’s a real comic book show. 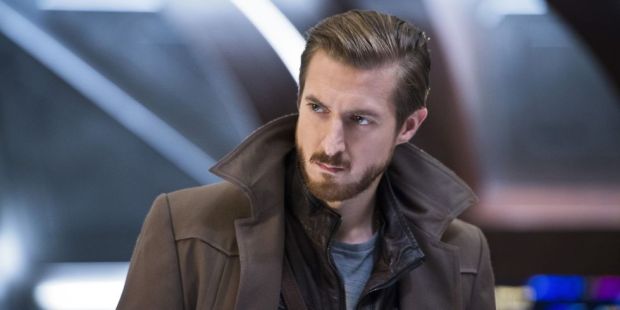 GF: It certainly is. Speaking of where the show is now…where are you?

AD: I don’t know how much you guys have seen over here…

GF: We know you’re not around!

AD: Ok. Well, I do come back. But it’ll be slightly in a different form to what you’ve seen before…

AD: Weeeeeell let’s not call it that!

GF: … Sorry, mental image. Was it you left Legends of Tomorrow to finish up Broadchurch?

AD: Yep, that’s what it was. And they were really good and giving me the time off to finish up on Broadchurch.

GF: Broadchurch has been absolutely brilliant.

AD: Oh my goodness, it’s one of the best things I’ve ever done in my life. It’s such a great group of people and Chris Chibnall’s a genius – he writes it. Just working with David (Tennant) and Olivia (Colman) and Jodie (Whittaker) and Andy (Buchan) and all those people for three or four years now has been a real joy. It’s been great.

GF: I haven’t watched any of season 3, I’m waiting for them all to come out so I can binge watch them.

GF: On the sensitive subject matter, it’s a pretty grim show. We have child murder, we have sexual assaults…what’s the atmosphere like on set?

AD: You know it’s really…jolly. Because the subject matter is so bleak everyone really wants to have a nice time making it. Everyone is there for the right reasons, everyone wants to make it work. It’s such a lovely bunch of people. I think it is bleak, but what really works about the show is, amongst other things, is the dynamic that David and Olivia have…they have a real funny double act. Olivia has this amazing – because David’s character is so dark – she brings out this real lightness in his character. Even in the most distressing moments she has this real skill to show a real human…it’s not humour, she has a real lightness of touch that makes you find what she does really funny because it really is how people would react in those kinds of situations. She really adds a lightness of touch to it, which is amazing.

GF: Your other work, you kind of split your time between the screen and the stage.

GF: Is there a preference there? One that you would move into entirely?

AD: Whichever one is the one I’m not doing at the moment is the one I would prefer! (Laughs) Yeah, I never thought I would be on TV, so my heart totally is in theatre. I just love it, there’s nothing else like it. But saying that, when I get into being in my 70s, if I get that far, I’m going to grow a massive beard and just play wizards. That’s my life, that’s my plan.

GF: You’ve got the eyes…

AD: I practise magic tricks in my spare time so eventually…

GF: Can we see a magic trick?

AD: No, I’m not very good at it yet. We’ll see what happens.

Jules (awesome photographer): Have you heard the rumour that you’re going to be the young Dumbledore?

AD: Yes! Do you know why that happened? Someone asked me in an interview, “would you like to play the young Dumbledore?” I said, “well, yes…of course I would”. Suddenly it became this news story. Eventually I’ll get to play a wizard.

GF: We need a hashtag…#DarvillforDumbledore.

AD: No, because a) it’s not going to happen and b) that’s for further down the line.

GF: Just to finish up one your theatre I had a line…theatre isn’t just a once off?

GF: Because you were in Once!

GF: That must’ve been good fun.

AD: That was amazing. Well, several things about it were amazing. I got to play guitar and sing on stage every night, which was wonderful, with an incredible group of people. I got to live in New York for a year, which was like a proper dream of mine. It was brilliant.

GF: I’m getting the ‘wrap up’ signal, so it’s time for my final question…

GF: You’re well known and recognised for particular roles like Rory and Rip and Paul on Broadchurch…is there a role you want people to be more aware of?

AD: Oh. No, not really…I don’t know! This is a boring answer: no. I’m just glad people watch what I do and apparently enjoy it.

GF: Matt had a better answer.

AD: What was Matt’s answer?

GF: He was in American Psycho at the time…

AD: OH YES, he was, of course! Well…no, nothing. Just grateful.

GF: Well, what you do is really great.

GF: I thought Rory and Amy were fantastic characters. Rory became a brilliant figure, and I named my daughter Amelia after Amy.

GF: I haven’t met Karen yet, she keeps cancelling when she’s coming out.

GF: The week she was born when you two left the show, so it kind of serendipitous for us.

GF: It’s an absolute pleasure to meet you, Arthur, thanks for coming down and talking to us and we’ll see you on the Con floor.

One thought on “Exclusive Interview with Arthur Darvill!”