Plot: In Ancient Egypt the Princess Ahmanet strikes a deal with the God Set to have power over the dead. As punishment for her evil ways she is sealed alive in a hidden tomb. In modern day Iraq a soldier looking to loot antiquities inadvertently unleashes Ahmanet and becomes closely tied to her plans.

Review: Right. Brendan Fraser was in a movie called The Mummy. It’s fondly remembered. This isn’t that movie. It’s not a remake, a reboot or a sequel. In one perplexing conversation this week someone complained to me that Tom Cruise is older than Brendan Fraser and shouldn’t be playing that role as though it was the same character. Another informed me it will never be as good as the original, which confused me for a moment because I never thought they were one for old Boris Karloff movies.

The Brendan Fraser films do carry a lot of nostalgia value, and I didn’t expect to have to say this but this is not the same series. Many people have latched onto the idea that it is, or is least a remake of the 1999 film. The 1999 Fraser starring film wasn’t an original either, it was the eleventh film Universal had made featuring the character.

Is that all cleared up? Yes? Good.

The Mummy is the much promoted first chapter in the ‘Dark Universe’ shared universe franchise that Universal is really pushing for to the point that the Universal logo morphed into a new ‘Dark Universe’ logo. This film revolves around Nick Morton (Cruise), a right jackass who is out to make some money on the side during his military service by selling loot on the black market. His actions lead to the discovery of an ancient tomb, from which the military extracts the sarcophagus imprisoning Ahmanet (Boutella). Back in her heyday Ahmanet struck a deal with Set, the God of desert storms, violence, foreigners and the balance against Horus in…sorry, wait…it’s Set, the God of DEATH. Egyptologists, this movie is going to make you splutter with indignation. They play fast and lose with the mythology, depiction of Ancient Egypt and the original film versions of the Mummy, preferring to craft their own world.

In fairness, we’re not here for a lecture on ancient religions. This is an adventure. On that front the film holds up fairly well. Cruise as Morton is a rascal of a character, somewhat similar to Nathan Drake from the Uncharted game series and he adds some humour to the film. We also get Russell Crowe as Doctor Jekyll and Mister Hyde and aside from flipping the idea somewhat (now he takes his serum to prevent turning into Hyde instead of the other way around, kinda missing the point) he was fun to watch. The switch from posh British doctor to brash yob made for one of the best scenes in the movie. Boutella – who you no doubt remember from The Kingsmen – uses her impressive physicality for a unique take on the titular monster, managing some impressive acrobatics for the fight scenes.

The movie is packed with big set pieces, such as the awesome plane crash sequence where Cruise and the crew performed the stunt a mind-boggling 64 times, a sand-storm tearing up London and an intense underwater sequence. The rotted corpses Ahmanet uses as minions add a touch of horror to the romp with some seriously creeping contorting. This seems to fall by the wayside as the film progresses, which was a shame. All in all this whole venture holds up well in this year of endless blockbuster films.

Being the first part of a larger franchise does leave the ending feeling pretty hollow. There’s no real resolution, just everything being put on hold until next year. The secret labs in London containing Creature From the Black Lagoon’s arm in a jar and vampire skulls was interesting, and we’d like to revisit that. It’s frustrating having every new movie be designed just to set up the next one though. Hopefully The Mummy leads to something more complete and worth waiting for. 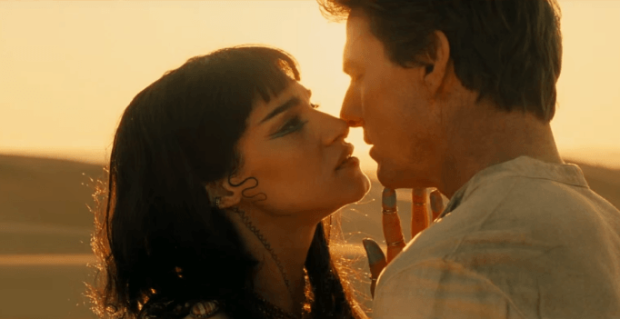 It’s not a film that’s going to win over many critics, but we had fun.

← Phobia Philms: ‘Under the Skin’
In Memoriam: Adam West →

6 thoughts on “Movie Review: ‘The Mummy’”