At this point I’m beginning to wonder what kept this series going for as long as it did. Jason isn’t that interesting a character, and he didn’t get his trademark look until well into the series, he’s not as interesting as some of his counterparts and there isn’t another key character to follow. It seems to be getting by on repetition of the formula. 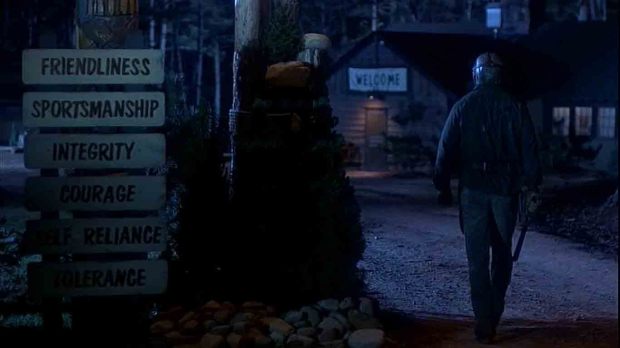 You’ve ended the previous film on an interesting premise – the boy who killed Jason was so traumatised by the encounter that his mind snaps and he takes up the mantle. It’s an interest twist, it adds a tragic irony to the character, it gives him layers of psychosis to the story…oh, you’re just going with Zombie Jason? Yeah, fuck it.

Completely disregarding the entire ending of The New Blood, the film opens with Tommy Jenkins driving to dig up Jason’s corpse and burn it as a means of closure. After unearthing the rotting body and impaling it with a fence post, lighting strikes the post and Jason is somehow brought to life as an unkillable monster thing. As the series didn’t have much in the way of supernatural elements before, this is quite a turn.

Soon after Tommy is arrested by the sheriff who, against all reason, doesn’t believe his story about Zombie Jason. The sheriff also tries to dump Tommy outside of town because his daughter as a thing for unstable maniacs. Jason, meanwhile, is making sport of camp counselors, business types on a paintball retreat, a gravedigger and whoever else is hanging around. In a break from tradition the camp does have some children staying at it, an addition which almost raises the stakes.

I say ‘almost’ because there aren’t many stakes to raise. This is absolutely the tamest entry in the series with all the stabbing and gore happening outside of the frame. This is a horror series that featured Savini effects, brutal and visceral murder scenes that shocked and appalled. Even when Savini wasn’t around the films were at least creative. In this film we see Jason walk up to people before he stabs them off camera, or someone gets ambushed in a cabin and we just outside while the movie takes place. It’s not like the film has character or stories to fall back on, it’s gore or nothing.

As to dispatching the invulnerable Jason, Tommy Jenkins just starts pulling new lore out of his arse. Apparently Jason, who he accidentally brought back from the dead with no explanation, can only be stopped at Crystal Lake. Why? Who knows. Maybe the water is magic. Either way, they dump Jason into the lake tied to an anchor and that puts him into sleep mode or something.

Rating: ONE out of TEN

Jason’s Best Kill: Fucked if I know, you barely see anything.