For fans of horror films there are certain characters who are revered: Norman Bates, Freddy Krueger, Leatherface, and many others are renowned for their ability to hack their victims into bloody messes. But not every slasher has the talent for leaving a trail of teenage bodies in their wake like these legends. Like any profession not everyone can be a top performer and not every horror movie villain is going to be remembered for generations to come. So in honor of these psychos who have had their hard work go unnoticed here are the most underrated horror movie slashers.

Driller Killer (Slumber Party Massacre trilogy): In the first installment of the Slumber Party Massacre films the Drill Killer is nobody special just a middle aged man who used a power drill on his victims. It is in Slumber Party Massacre II that he becomes a lot more fun. This time the Drill Killer takes on the form of a cheesy rockabilly performer who can suddenly infiltrate dreams and did I mention his drill is now an electric guitar. This may sound completely ridiculous and that is mainly because it is, but at the same time is hilariously awesome. Sadly when the third film rolls around filmmakers bring things back to a normal guy with a drill.

Horace Pinker (Shocker): Further proof that a Nightmare on Elm Street was lightning in a bottle is Wes Craven’s second attempt to create an iconic horror villain. Horace Pinker is a serial killer who makes a deal with the devil to get his vengeance on the kid who stopped him. Upon his death by electric chair, Pinker becomes a being of energy who is able to possess various people as he hunts down the kid who put him away. It is the hammy performance of Mitch Pileggi of X-Files fame who has made Horace Pinker a cult favorite for fans of cheesy horror. 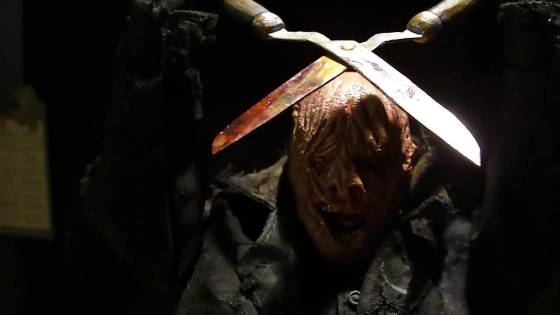 Cropsey (the Burning): Despite being the brainchild of the Weinstein brothers and Tom Savini, Cropsey left little impact on moviegoers. This could best be chalked up to his lack of screentime and the fact that gardening sheers are not a particularly intimidating weapon of choice. Before Jason Voorhees and his mother struck fear into the hearts of campers Cropsey relentlessly pursued his victims at the summer camp where he was burned to a crisp. Sequels were planned for this killer but they never materialized which is a shame because, we as the audience never really got the chance to learn about this character enough for him to become memorable.

The Prowler (the Prowler): Make-up and special fx legend Tom Savini at one point declared this movie to be his finest work. A character whom I hold as one of the more underrated of the horror film slashers, the Prowler has a memorable look and an interesting backstory to boot. The legacy of a traditional high school dance is forever associated with the brutal murder of a woman at the hands of her soldier ex-boyfriend. In 9180 a new group of teens are being hunted down by a mysterious man in the same old battle fatigues utilizing a pitchfork and bayonet to do his dirty deeds. Of course with Tom Savini’s handiwork the Prowler is responsible for some very impressive kills. 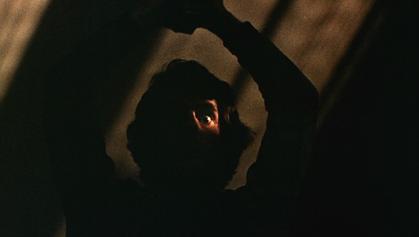 Billy (Black Christmas): Much like Psycho and Peeping Tom; Black Christmas is the perfect example template for the slasher movies which followed. Utilizing a phone as his primary weapon terrorizes a sorority during their Christmas party. Since Christmas is so close and snow is coming down his potential victims are isolated and at his mercy. In a wise movie, director Bob Clark kept Billy shrouded in darkness which only added to the suspense and terror in this horror masterpiece. 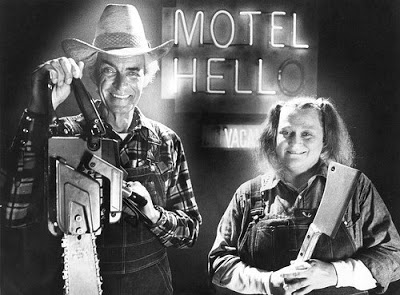 Farmer Vincent (Motel Hell): In his later years noted character actor Rory Calhoun (whom fans of the Simpsons will recognize for his ability to stand and walk) was given a new chapter in his career in the horror genre. The start of this renaissance was in the horror/comedy cult classic Motel Hell where he plays Farmer Vincent. Exuding down-home charm and a laid back attitude Farmer Vincent runs his meat business by capturing travelers from the back country roads. He slices their vocal chords to prevent them from screaming and buries them up to the neck in his garden. When the time is right he brings their life to an end so that they can become an ingredient in his famous smoked meats. Of course his good ol’ country boy demeanor goes out the window when he has to wield a chainsaw while wearing a pig head and defend his business practices.