TV Review: ‘Game of Thrones’ Season 7 Episode 7: ‘The Dragon and the Wolf’

Synopsis:  Cersei, Jon, and Dany all meet to discuss the threat of the Night King.  Sansa consults with Littlefinger and makes a decision about Arya.  Theon makes a choice regarding his sister Yara.  Sam arrives at Winterfell and discovers an important fact about Jon’s true identity.  Dany and Jon finally express their feelings for each other.  The Night King descends on The Wall with his Army of the Dead. 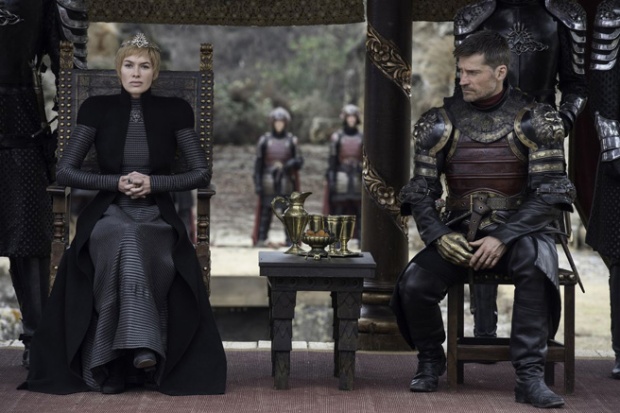 Review:  Well here we are folks, the season finale in the penultimate season of Game of Thrones.  This season has raced by, due in no small part to the reduced amount of episodes and the breakneck speed with which events have transpired.  On a high note, season seven’s finale, “The Dragon and the Wolf” was the longest in Game of Thrones history, clocking in at 79 minutes.  So was the juice worth squeeze?  After the events of this episode, I’d say that’s an emphatic yes.

Cersei certainly possesses a flair for the dramatic, holding the conclave of monarchs in the ancient Targaryen Dragon Pit, where the dynasty held their dragons.  The fact that it is a broken and wasted building and symbolic of a failed house, was probably meant to intimidate Dany.  Yeah that didn’t pan out as the Breaker of Chains makes a dramatic entrance on Drogon.  Tyrion, ever the leader, takes the aurochs by the horns and kicks off the meeting.  Sandor Clegane delivers the wight he helped capture North of the Wall, who comes within an inch of Cersei’s face.  Speaking of Sandor, it was a pretty cool moment to see him confront his brother The Mountain.  For a moment I thought they were going to go at it but The Hound says the cryptic line of, “It’s not how it ends for you brother.  You know who’s coming for you.  You’ve always known.”  Who does he mean?  Himself?  Still holding out hope we get the Clegane Bowl next season.

After Jon’s demonstration on how to kill the wights, Euron jumps ship (pun intended) saying that he’s taking his fleet and heading home.  Cersei meanwhile agrees to help Jon and Dany in principle, as long as Jon heads home to Winterfell and stays there.  Jon refuses, saying he’s bent the knee to Daenerys.  Furious, Cersei storms off and although Tyrion and Dany chastise Jon for his integrity, he won’t back down.  Jon Snow takes a lot of shit for being so honorable in Game of Thrones, and how it always bites him in the ass.  But he makes a good point here, essentially saying where does it end if all we keep doing is lying to each other?

Meanwhile Tyrion decides to parley with Cersei directly.  The scene between these two was amazing.  There is so much subtext going on here and it’s a revelation to hear Tyrion say how him killing his father has torn him up inside, in spite of what Tywin was.  Regardless, Cersei doesn’t care about Tyrion’s intentions or his feelings, only what it cost her and the Lannister house.  Somehow though, Tyrion convinces here to return to the Dragon Pit where she pledges her forces to fight the Army of the Dead and form an armistice until that fight is over.  Just beforehand there is a little scene with Dany and Jon though where they discuss their houses.  What I liked was that Jon is the first person to suggest that maybe the proclamation the witch made in season one, that Dany could never have children again, perhaps isn’t true.  Could this suggest a future pregnancy for Dany?

We do know of a very real pregnancy though and that’s Cersei’s.  It appears she was playing everyone for fools the whole time as she reveals to Jamie that she lied about pledging her forces.  I think the whole meeting was a setup.  Cersei somehow already knew that Jon had bent the knee so she asked him to do something honor would not allow him to do.  Then when Tyrion comes to “convince” her to change her mind, Cersei looks magnanimous and garners trust by pledging her forces.  Moreover, Euron hasn’t tucked tail and run, he’s sailing to Essos where 20,000 sell swords of the Golden Company are set to join the fray under Cersei’s direction.    This news enrages Jamie and for a tense moment it almost looked like The Mountain was going to kill him.  The fact that Jamie heads North on his own and leaves Cersei behind is a giant “fuck you” to her decision.  Jamie draws a metaphorical line in the sand.   He’s broken vows before.  He’s not breaking another one.  You can be sure Bronn will catch up to him soon though.

On Dragonstone, Jon, Dany, Tyrion and others plot their military movements and decide that Dany and Jon should travel to White Harbor together, rather than intimidate the Northerners by arriving on a dragon.  Just before leaving, Theon confronts Jon and they have a discussion about loyalties and their fathers both real and surrogate.  Despite all the suffering Theon has gone through, he feels like he still needs absolution and he gets it from Jon to a degree.  Jon even impresses on Theon something he’d probably never thought of before, namely that Theon is both Greyjoy AND Stark.  Ironic considering that Jon is both Stark and Targaryen.  More on that in a bit.  After a brief scuffle with the Ironborn, Theon decides to head East and rescue his sister from Euron.  I have to admit this sequence and the one just before with Jon and Theon was the least interesting of the episode.  Unless Theon is going to have some redemptive moment next year by killing Euron, I’m over it. 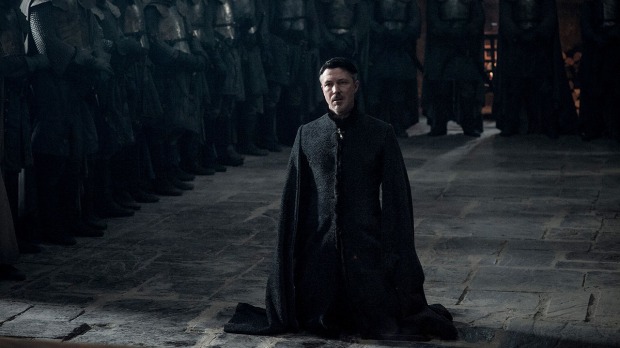 Back at Winterfell, Sansa learns of Jon’s decision to bend the knee to Dany.  Littlefinger suggests a political marriage may be in the works.  Of more immediate concern is what to do with Arya.  Baelish tells Sansa about a game he plays where he imagines what’s the worst thing a person could do to get what they want.  Obviously it means Arya killing Sansa and taking her place.  Consequently, Sansa brings Arya before herself and the Northerners on charges of treason and murder.  Only, in a brilliant move she turns the tables and hurls those charges at Littlefinger.  In an epic scene Sansa lists in detail the vile things Lord Baelish has been involved in–plotting with Lysa to kill Jon Arryn, killing Lysa by throwing her out the Moon Door, making Lysa send a raven to Catelyn that claimed the Lannisters were to blame, lying and saying that the dagger Arya carries belonged to Tyrion Lannister when in fact it was Littlefinger’s, and of course his betrayal of Ned Stark.  With each accusation the question “Do you deny it?!” drips from Sansa’s tongue like acid.  It was a pleasure to watch that weasely son of a bitch beg for his life only to have Arya cut his throat.  Goodbye and good riddance.

Shortly after Baelish’s death, Samwell Tarly arrives at Winterfell and seeks out the company of Bran.  In a revealing conversation, Bran tells Sam how Jon is actually the “bastard” son of Rhaegar Targaryen and Lyanna Stark.  However, apparently the three-eyed raven doesn’t know everything.  Taking credit for Gilly’s discovery (dick move Sam) Sam reveals to Bran that Elia Martell and Rhaegar Targaryen’s marriage was annulled and Rhaegar married Lyanna in a secret ceremony.  Working his three-eyed raven magic, Bran sees this in a flashback and also discovers Jon’s true name-Aegon Targaryen.  Funny enough Aegon was also the name of the son Rhaegar had by Elia Martell.

On the way to White Harbor Jon knocks on Dany’s cabin door.  The two end up making love, neither knowing that Dany is actually Jon’s Aunt.  Is it possible to want two people to hook up and be disgusted at the same time?  Because I think that’s how a lot of people feel.  No one notices except Tyrion, who seems to disapprove.  I don’t think it’s because he loves Dany like some have said.  I think it’s because he knows what Rhaegar’s love for Lyanna did years ago which was make the kingdom bleed.  And Tyrion knows better than most how love can cause bad judgement and make us do things we wouldn’t do if we were thinking rationally.  Shae anyone?

Of course if wouldn’t be Game of Thrones if they didn’t whet our appetite for the following season, and holy shit did they deliver.  As Tormund and other Wildlings watch, the Night King and the Army of the Dead approach The Wall.  The resurrected Viserion burns a huge section down with blue flame..  The episode then ends with a final shot of the dead marching south, thousands strong.

Hot damn what a finish!  What sucks is that we may have to wait until 2019 for the final season.  Ahhh!  The good news is that all of the final six episodes have been written and production begins in October.  However, each of season eight’s episodes is rumored to be super-sized and production could run through as late as August of next year.  Let’s hope it doesn’t come to that and that we get a final dose of Game of Thrones before Santa comes calling next year.  Either way I’ll be there with a glass of Arbor Gold in my hand ready and waiting to watch.  Until next season folks!

One last thing before we part dear friends.  I found this lovely gem today and I couldn’t help but share…

One thought on “TV Review: ‘Game of Thrones’ Season 7 Episode 7: ‘The Dragon and the Wolf’”