Jaime Lannister and Harley Quinn are the Same Character

On the surface this is a strange claim because these two characters appear to be nothing alike. One is a nobleman and a knight in an incestuous relationship with his twin while the other is a demented clown and comic book villain. Surprisingly their role within their stories and their character arcs line up quite neatly.

THERE ARE INITIALLY DEFINED BY THEIR RELATIONSHIPS

Have a look around for any description of these two characters and you’ll find that most people associate them as one part of a pair. Jaime has sex with his twin sister and Harley is the Joker’s girlfriend. They are both introduced to the audience through their relationship, with Cersei Lannister established as the aloof wife to King Robert whilst Jaime is left in the crowd. He only makes an impression with Bran Stark discovers Jaime and Cersei having sex in the tower. Likewise Harley Quinn’s first appearance was in the Batman The Animated Series episode ‘Joker’s Favour’ as one of Joker’s henchmen. It was implied and later confirmed that the two were in a relationship and after this Harley would go on to develop her own character and story.

What made both of these relationships noteworthy to audiences, and a talking point about the characters, was the social taboos (and laws) being broken by them. Jaime’s relationship with his twin sister Cersei is…horrifying, to say the least. It’s revealed at the end of the Game of Thrones pilot and came a massive shock to viewers. 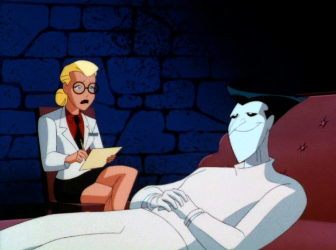 Although not as uncomfortable as incest, Harley’s relationship with the Joker is in itself unethical. They first met as doctor and patient, with Harley interning at Arkham Asylum and wanting to make a name for herself by analysing the big name super-villains of Gotham. She was manipulated by Joker during his therapy sessions and their began a relationship that peaked with Harley staging a break-out to free her criminally insane patient.

THEY ARE VICTIMS OF ABUSIVE RELATIONSHIPS

This is going to be somewhat contentious. In the case of Harley and Joker the issue is more straightforward. From the very beginning Harley was being emotionally manipulated and, later, physically abused. The dynamic between the two are representated as having all the hallmarks of an abusive relationship. Harley’s life is a nightmare of guilt, passion, anger and pain.

With Jaime and Cersei this is not as clear-cut, especially considering a rape scene included in the TV adaptation (which drew strong opposition from the public), and the perception that the stronger, male character is going to be the abuser. What truly defines an abusive relationship is the power and control between those involved, and the power lies with Cersei. It’s observed and suggested in the story of Cersei and Jaime that Cersei is pulling Jaime’s strings. He always seeks to return to Cersei, he seeks her approval and is always lost without her. In recent times Jaime has been kept in check with the physical threat of zombie-mountain.

This aspect of the character was hinted at early on:

Bringing us neatly to their next point…

THEY ARE PRONE TO VIOLENT OUTBURSTS 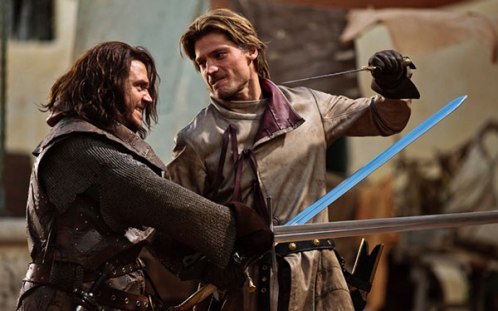 To say that these two characters are mentally unwell would be saying something obvious. We’ve seen that both characters are involved in abusive relationships that they justify as being the price to pay for love. This leads to both characters internalising much of their pain and frustration, which in turn contributes to their violent nature. To most people the sudden outbursts and brutal violence and a sense of glee in murdering those who annoy them would be concerning, but these characters fit into their respective worlds. When paired with the Joker and other denizens of Gotham’s underworld, Harley is positively restrained. Jaime Lannister keeps company with Ilyn Payne and the Cleganes – all brutal psychopaths.

What separates Harley and Jaime from their peers such as Joker, Poison Ivy, The Hound and Payne is that they’ve both expressed remorse. In ‘Mad Love’ Harley shows regret for how easily she was manipulated before regressing to anger and denial. Jaime has shown different sides of his character when in different company such as Brienne of Tarth and even Bronn. When put together the impression of both characters is one of people repressing and denying their situation and striking out at any who confront them with it.

BOTH ARE VILLAINS WHO BECAME SYMPATHETIC

As established we got introduced to Jaime having sex with his twin sister and throwing a child to his death. During the first parts of the story Jaime remains a repulsive character, stabbing Jory Cassel in the eye and taunting his foes. It’s only when he’s captured by Robb Stark’s army and speaks with Catelyn and Brienne that the character begins to get fleshed out. In his journey back to King’s Landing we learn more about Jaime, his guilt over his actions and his love for his family. When he returns to Cersei his representation shifts from being a vicious, wealthy thug to being a cowed victim of his relationship with his sister.

Harley Quinn’s transition to sympathetic victim is less subtle. We see the abuse she suffers at the Joker’s hands, including being thrown out an upper story window when she almost caught Batman. The role of victim became Harley’s defining feature for the remainder of Batman The Animated Series and some early stories in the comic run. Unfortunately recent books have cast her as a quirky, wacky figure who produces merchandise, with only the best writers remembering what made her so interesting in the first place.

We may have mentioned how much we love Tom Taylor’s books a million times or so.

IN SPITE OF EVERYTHING, THEY SHOW SYMPATHY FOR OTHERS

Given their circumstances it would be…understandable…if both Harley and Jaime became true victims of circumstance and became irredeemable characters. One thing that consistently sets them apart from their peers is the often surprising sympathy they show to others. Harley is highly protective of Bud and Lou, her pet hyenas, referring to them as her ‘babies’. In the episode ‘Harlequinade’ she turns against the Joker and helps Batman capture him when she realised Joker wasn’t going to let her save her pets. Harley often shows sympathy for Joker’s other henchmen and prisoners and even heroes at times. When she realised Black Canary was pregnant she opted to stop fighting her and cared for her instead. 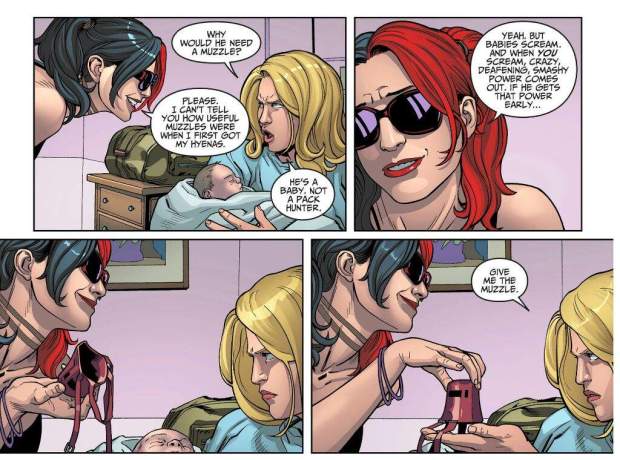 Jaime is no different. One major turning point for the character occurs when travelling with Brienne during a time of war. In spite of his mocking the viewers get impression that he develops respect for Brienne as a swordsman. When they’re captured by Boltons Jaime has the opportunity to escape on his own when the soldiers try to take advantage of Brienne. Instead of taking his chance Jaime lies to the Boltons to protect Brienne, leaving himself captive. The established character at this point wouldn’t have blinked before throwing another to the wolves – this was the beginning of Jaime becoming sympathetic in the eyes of the viewer. This impression was later enforced when he puts himself at risk to save his brother from execution.

THEY WERE REDUCED FROM A POSITION OF AUTHORITY TO LACKEY

We’ve discussed both characters being victims of abusive relationships and their transition from villain to sympathetic. Another noteworthy similarity between the two fictional characters is a shift from a position of power. When the Joker first met Harleen Quinzel she was a qualified doctor working an internship. During a placement at Arkham she held an authoritative and ethical position over the inmates. After the Joker’s manipulations she was reduced to a sidekick role and readily took orders from him.

Whilst Jaime is not included among Westeros rulers he was a leader among his peers. He’s a member of the King’s Guard, seven elite warriors charged with protecting the king, and leads the Lannister armies into battle. In this role he commanded respect from other soldiers and fear from rivals. Over time his reputation among the people of Westeros falls and he serves only to do Cersei’s bidding. Prior to breaking free from her control at the end of the most recent episode he functioned primarily as a hitman for his sister.

One thing that the previous points shows us is that characters in abusive relationships can be portrayed in similar ways. This final point, however, is more of a coincidence. Both Jaime and Harley have, over the course of their stories, wound up disfigured. After being captured by the Bolton soldier Jaime has his sword hand cut off. Being the reputed best swordsman in the land this was a major impediment for his character.

Whilst Harley wasn’t physically changed in the original continuity the recent mess of reboot and reimaginings the DC universe has undergone in recent years has made one major change to the character. After starting her relationship with the Joker and breaking him out of jail, the Joker threw Harley into the same vat of chemicals that disfigured him. As a result Harley now has the same pale skin and permanently red and blue hair (weird that the chemicals knew how to divide her hair perfectly down the middle). Since then Harley has been noticeably marked as the Joker’s other half and unable to pass for a normal citizen. Since this aspect of the character was included in the Suicide Squad movie it’s likely to be more widely accepted as canon.

So what does all this mean? Nothing, really. It’s simply a strange similarity between two characters who, on the surface, have nothing in common. It does, however, mean that Cersei Lannister is the Joker of Westeros. That’s a terrifying thought.