As Destiny 2 continues to load in on thousands of gaming consoles and computers across the world, I hold my breath. The beta last month was a great success promising amazing visuals, a solid story, and near glitch-free game configuration and features. It left me very hopeful, and looking forward to the full games release. Now that the game has been out for nearly a week, it’s time to stop and reflect.

I’ll start with the story. The world of Destiny has always had a rich and complex storyline; however, it has been hidden in collectable Grimoire cards you earned by doing certain activities (which you had to log onto the Bungie website or phone app to access), or in off-hand comments certain characters made at random and never said again. Much of the story was never brought into the cinematic legend of the game and as such was largely lost.

Bungie seem to be attempting to amend this in the campaign of the new game. It’s a good length – it takes some solid hours to complete which is a relief considering Destiny’s history of short and sketchy campaigns. What I really liked however was how it captured the reasoning behind the bad guy’s actions. Unlike previous Destiny bosses that seem to want to destroy the universe ‘just because’, Ghaul has deep, psychological issues that resonate through his actions. The cinematic scenes capture this beautifully, and I must admit I enjoyed the cut-scenes a bit more than the gameplay itself. The cinematics are stunningly detailed, although the ending was a little dissatisfying and slightly confusing considering the massive hype and discussion Bungie has created around Ghaul being the biggest boss the Guardians have ever faced.

Saying this though, the gameplay is polished and easy to use. The controls haven’t changed from the original game, the only exception being the way you access your character screen and world map. This however is only one button, and is a rather easy adjustment. Your subclass is set out a little differently from the original Destiny flowchart, however the modifications you can make differ very little from what a Destiny veteran would be used to. In some cases, it’s a little too familiar; the initial character design screen is identical to the first game. I was hoping for some different choices, especially considering the bizarre options available for hair-style and face structure in the last game (think buzz cuts, mohawks and square jaws for females). Disappointingly, nothing is new here, leaving me feeling a little put out. If I knew nothing had been changed, I would probably have just kept my original character design.

For the characters themselves, you get the same choice of classes as you did in the first Destiny game – Warlock, Titan, or Hunter. With each class, you get three subclasses to unlock, each featuring a different power type – Solar, Void, or Arc. This enforces a sense of continuity, tying the game together with its prequel and simultaneously supporting the story’s main theme of regaining our stolen abilities and powers as the last Guardian standing. It was also nice to see many of the lacking aspects we wrestled with in the original game polished up so that each subclass works how we always imagined and wanted them to.

Although the grenades and melee abilities don’t really change from the original game, the superpowers themselves have changed quite a bit. I really like the changes done to the Titan and Warlock classes. The changes to the Hunter class however aren’t that substantial, which is mightily frustrating as this has always been my main go-to. The new Arcstrider subclass is fantastic and a great deal of fun, but the Solar-powered Gunslinger is wildly effective compared to the original rendition. It’s a bit better than the mess it was in the beta, but I’m still saddened by the loss of my favoured subclass. I’ve yet to get really into the Void subclass Nightstalker but from what I’ve experienced it doesn’t appear to be much different from the original. I don’t honestly mind this as the Nightstalker was always a helpful subclass to have equipped in a group activity such as a raid or strike.

Hunter’s Arcstrider: Slash that staff like a lightsaber and you’ll be fine.

In Destiny 2, the Titan class really comes into its own. As a Titan, you play a tank – a tank armed to the teeth in heavy-hitting weaponry and defensive shields. You aren’t agile as the Hunter or Warlock classes, sure, but you really don’t need to be. I especially loved the new Sentinel subclass. It replaced the old Defender subclass, and is quite different overall. The prized jewel of this subclass is an amazing shield which you can throw across the room Captain America style to take out your enemies; or if you’re close-range, you can simply opt to bash them senseless. You also keep the old Ward of Dawn bubble, which makes a master of this super very hard to beat. The Arc Striker subclass has been changed for the better too. In my experience, the Striker subclass was a most-neglected subclass in the original game however it has definitely been given some attention in the production of Destiny 2 and is now a devastatingly effective subclass, especially in a crucible context. I haven’t played the third Titan subclass or seen it in action so I unfortunately can’t give an opinion on it yet.

Titan’s Sentinal: Channel the Captain, be the hero you know you’re meant to be.

The Warlock has always been a favourite class of Destiny players. I’ve heard it referred to many times as the superior class although I politely disagree. I personally didn’t play a great deal on my Warlock in the first game, however that may change in Destiny 2 as I really enjoyed playing the Warlock both in the beta and the new release. I especially enjoyed using the Dawnblade subclass. This subclass replaced the old Sunsinger subclass and is significantly more fun. When activating your Dawnblade super, you are bestowed with a sword of fire, from which you can sling waves of flames towards your enemy. The range of this super was especially impressive. The Voidwalker subclass hasn’t been changed much from the original version, with only one main change. You can now either hurl the magic orb of death energy as one large projectile towards a cluster of enemies (as is the norm) or you can shoot the orb once you’ve released it and it separates into several smaller projectiles with intensely accurate tracking abilities. Like with the Hunter’s third subclass, the Warlock’s Stormcaller subclass hasn’t changed a great deal either. 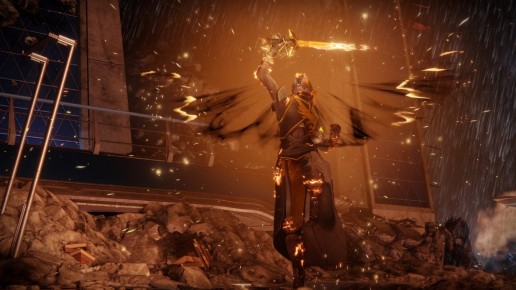 Warlock’s Dawnblade: When you see this, know that there is little you can do. Seriously.

A new addition to the Destiny class system are the new unique class-specific abilities. Each class gets a mini-super – an ability that can turn the tide between everyone dying or completing the mission and getting to claim the loot.

As seems to be the theme in Destiny 2, the Hunter draws the short straw in the unique class abilities. Whilst the other two classes abilities are quite strategic in nature and are inclined towards supporting the team, the Hunter’s ability is to make a gun-reloading or melee-recharging sidestep. A sidestep. Whilst the Titan can now create shields at the drop of a hat and the Warlock can make rifts of stats-boosting magic, the Hunter gets a dance move. I can admit that this may be of use in a crucible match, but compared to the other classes, it is very, very sad. Bungie could have at least made the sidestep create ammo for other nearby players, even if it was only a few rounds. In a time-sensitive raid, that would have converted the Hunter from a usually squishy and rather useless player into a valuable and contributing class that is actually sought after by a fireteam.

In the case of the Titan, you keep the trademark bubble of the old Defender class, but it takes the form of one-directional, half or full height walls. The half wall, although not providing as much cover as the full height wall, automatically reloads the weapons of those standing behind it. I believe these are a fantastic addition and add an excellent strategic element to the game, especially in PvP. However, this could also be a potential trouble-spot for other players as it does give the Titan a very steep advantage in game modes such as Control when sitting still for an extended time is a key necessity to winning the game.

What I liked the best conceptually was the ability of the Warlock. As a Warlock, you are essentially playing a mage character. In many RPG games, the mage acts as the healing class. We haven’t seen any of that in Destiny so far. There are stat boosting and shielding aspects as well as a few individual-specific benefits but there hasn’t been a team-healing ability. The Warlock’s new class ability allows the player to cast a sort of spell on the area around them. There are two options – continual healing or an increase to attack power. Like the Titan’s class ability, both options have a very diverse range of possible applications against other players as well as against the AI.

I have yet to play much more than a few games of the crucible yet, so I’ll just write a brief word on my experience so far. After the beta, I was very apprehensive. Although the maps were beautiful, the mechanics were clumsy and superpowers charged ridiculously slow. I am relieved to say that they have worked on this since the beta; superpowers now charge at a more reasonable rate and gameplay is much smoother.

Over all, this is a solid game. It is at times too nostalgic; many of the maps seem to taken directly from the original game and just run in reverse or touched up a bit so to be a little different. Like with the supers, some exotics are being taken straight out of the first game. This meant that at times I felt as if I was just playing another over-priced DLC. That said, there are heaps of quests and side missions to complete, many of which I am still progressing through. Much like the first game, Destiny 2 will be a game in constant development with more content, levels, armour, weapons, and features being continuously added to the initial skeleton this release represents. The skeleton is a strong and sturdy one. It promises a long and fulfilling lifetime in which many adventures shall be undertaken and countless battles fought and won. It promises a journey.

I look forward to it. After all, Destiny is best known not best for its gameplay or stats. It is known for the community of players that gather around it, be the experience good or bad. I think that out of all the Destiny 2 trailers that are currently floating around the net, this one by the Japanese captures the feeling of Destiny best. Whatever the mission, whatever the severity of the matter, always take a minute to have a dance with your fireteam.

One thought on “Incredible graphics, responsive gameplay, engaging story – has Bungie finally fixed the bugs of ‘Destiny’ in ‘Destiny 2’?”