Plot: Mitch Rapp is a young man whose fiancee is killed in a terrorist attack. He fashions himself into a vigilante killer to get revenge and gets recruited into the CIA to carry out black ops missions. 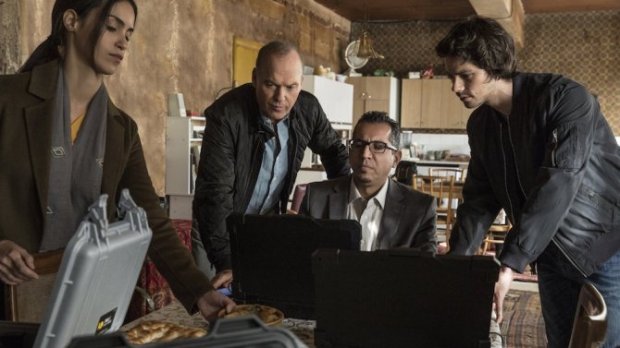 Review: American Assassin, adapted from a best selling book series by Vince Flynn and brought to the screen by FOUR other writers, begins with our man Rapp (O’Brien) proposing to his girlfriend in a situation so painfully idyllic that you might as well start counting down to tragedy. Fortunately we don’t have to wait long, as some terrorists wearing board-shorts turn up to randomly shoot people. His fiancee dies and we cut to 18 months later where Rapp has managed to turn himself into a more hardcore version of Jason Bourne: an expert in Islamic culture and languages, a professional marksman and deadly hand-to-hand fighter with contacts within deadly terrorist cells, which he is planning to take out one by one.

Rapp certainly has progressed from…something…to hardcore assassin. Yeah, we have no idea who Rapp is prior to his transformation into assassin. It’s not really a transformation because we only see him as an assassin. He does go to a bar and orders…’drink’. His mother had an engagement ring. That’s all. It wouldn’t have hurt to give him some character. We might’ve cared about him. He’s defining trait is that he doesn’t follow orders, which just makes us question why the CIA bother with him. Rapp is haunted by one terrorist in particular and tends to go bananas if confronted by his picture, but it’s not really clear why he hated this one guy so much and his death doesn’t have any impact on the story.

There’s also a shocking reveal where a character is revealed to be someone else, but again we knew nothing about them to begin with so it didn’t matter to the audience and Rapp still considers them trustworthy. There’s a big backstory between grizzled Cold War veteran mentor Hurley (Keaton) and the bad guy ‘Ghost’ (Kitsch) but, again, they barely mention what it is…so it doesn’t matter.

This film has a bad case of telling and not showing. They tell us about character traits instead of having them actually doing it. There’s no reason to care about any of it, or Ghost’s plan to get a bomb and blow stuff up. The action is well handled and is fun enough, but isn’t unique or exciting enough to become a defining feature. There’s one weirdly gratuitous torture scene that was gory for shock value only.

Michael Keaton, still riding his comeback wave, happily chews the scenery (among other things) and has some fun scenes. The final act does give us a bit of spectacle and impressed on a visual level, but there’s very little memorable here.

American Assassin could have been a fun throwback to an older style of action cinema, but as it stands it’s just a small blip on the radar of 2017.