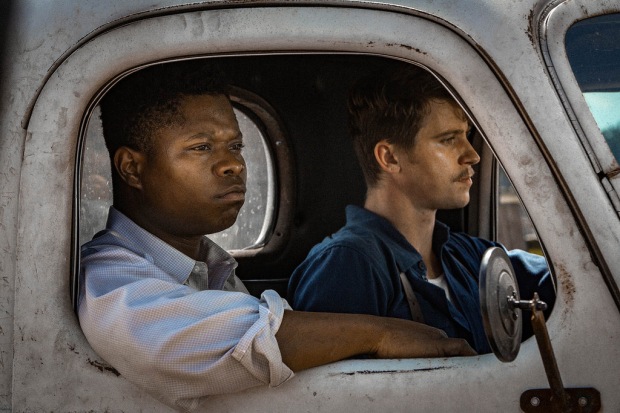 Plot:  Based on the novel of the same name by Hillary Jordan and set in rural Mississippi just after WWII, Mudbound  follows the intertwined lives of the McCallans, a white farming family led by patriarch Henry (Jason Clarke) and the Jacksons, black sharecroppers who work for the McCallans.  Adrift and still suffering the after effects of war, Henry’s brother Jamie (Garrett Hedlund) spends most of his days drunk.  That is until he meets Ronsel Jackson (Jason Mitchell), also a WWII vet and a kindred spirit who longs to return to his white German girlfriend.  The two strike up an unlikely friendship.  However, both will come to remember that Mississippi is not Europe and that crossing the racial divide can be dangerous.

Review:  The symbolism of mud in director Dee Rees’ latest movie Mudbound is something that persists throughout the film.  Mud can mean numerous things in Rees’ post WWII drama.  A deep connection between a farmer and the land, and how the two are often intricately bound.  Something Jason Clarke’s Henry McCallan comes to know well.  As a representation of borderline poverty as Henry’s wife Laura (Carey Mulligan) understands.  Or how sometimes no matter what we do to avoid conflict, life just gets dirty and nasty.  Yes.  Mud pervades in Rees’ film but rather as a subtle fleck under your fingernail than a pit where all you see is brown.

Poignant, powerful, tragic, and timely, Mudbound sweeps you into a snapshot of Southern Americana so absolutely you can almost smell the earthy wet fragrance of the cotton fields.  Director Dee Rees has crafted a remarkable film that not only showcases her talent, but may be Netflix’s first legit Oscar contender. It’s a film with a singular vision that accurately and ferociously nails the black experience in the rural South post WWII.  A time  when heroic black soldiers like Ronsel Jackson returned from a place where they were lauded and treated as liberators, to a home that saw them as sub-human.  It’s also a film about PTSD in a time where the term didn’t even exist and  how alcohol was the prevalent coping mechanism.  Themes of family, friendship, honor, duty, devotion, and more all weave into a beautiful tapestry of a film that while complex, manages to be accessible and profound.

Apart from the flawless direction, Mudbound is a wonderfully shot film with Rachel Morrison’s cinematography truly a sight to behold.  Her artistry captures life in the rural south and wartime Europe with precision and grace.  Morrison’s work is complemented by Tamar Kali-Brown’s haunting score and Mako Kamitsuna’s impressive editing.  Rees and Virgil Williams’ script unfolds in a way that makes it one of the best of the year.  The dialogue drips with subtext and navigates its way from endearing to searing and back again.  A tender scene between Laura and her neighbor Florence Jackson (Mary. J. Blidge) after Laura loses her baby is just as dynamic and impactful as a dust-up at a local convenient store or a moment involving the KKK.  All merge together to realize Rees’ vision.  The synchronicity is palpable.

Mudbound  also proves, once again, why the Academy needs an Oscar for best ensemble cast.  EVERYONE is at the top of their game here.  Mary J. Blidge gives an astounding performance as Ronsel’s mother Florence, a woman who displays stoicism and a reticence to express love for her children, in hopes they may one day have a better life.  Mulligan delivers yet another stellar performance to add to her growing list.  Mulligan’s Laura arguably grows more than any other character in the film, from a shy thirty-one year old virgin to a tough but resilient farm wife caught in a lonely marriage.  Jonathan Banks excels as Pappy McCallan, a virulent and unrepentant racist, hated by most of his family.  Jason Mitchell, who killed it as Easy-E in Straight Outta Compton, follows that performance with an even better one.  Mitchell’s Ronsel is the most sympathetic character of all.  He’s a man who was lauded as a liberator and comes home only to find he’s the one that needs liberation. The sense of betrayal by the country he risked his life for is written on his soul.

Rob Morgan’s performance as Ronsel’s father Hap Jackson’s is nothing less than spectacular.  My previous encounter with Morgan as an actor was limited to his portrayal of Turk Barrett in the television show Daredevil.  Man you talk about a diamond in the rough, this guy displays some amazing acting chops in Mudbound.  He’s a dedicated family man who clings to the idea that maybe someday he’ll run his own farm.  Yet you see the internal struggle between his ambition and the reality of being a black man in 1940s Mississippi.  No quarter or compassion is allotted him from Henry when Hap breaks his leg and his mule dies.  There’s simmering rage there but he’s smart enough to “know his place.”  His son represents the next generation who will not submit and even though he fears for him, Hap definitely respects him.  If Morgan doesn’t get an Oscar nomination I’d be shocked.

Speaking of Oscar nods, it will be a travesty of Garrett Hedlund doesn’t receive one.  I’ve never considered him anything more than a middle of the road actor…until now. Hedlund delivers one of the best performances of 2017 with Mudbound.  To say Jamie is tortured by the horrors of war (he sees his wingman’s head blown off right in front of him) is like saying the Freelings in Poltergeist heard a few bumps in the night.  He soaks his anguish in alcohol.  Yet he finds a kindred spirit in Ronsel and soon their friendship blooms.  Hedlund gives a multi-layered performance of profound impact.  Jamie is a man who dares to be friends with a black man in Mississippi.  He rejects the brutal racism of his state and in particular his father.  As you might guess the consequences aren’t ideal and there’s a scene towards the end of the film that’s like a direct kick to the solar plexus.

In spite of the darker themes in Mudbound, there’s also an intrinsic layer of hope that courses throughout the film.  There’s an idea that racism is not an institution that will prevail forever, that if enough men and women display humanity, that the better angels of our nature will shine through.  It’s this message along with other cinematic accomplishments that make Mudbound one of the best films of the year.