Review – Doctor Who ‘Twice Upon a Time’

The bittersweet time is here once again, when we bid a tearful farewell to a Doctor while brimming with excitement for the incoming new Doctor. When we last left Peter Capaldi’s Twelfth Doctor he had reached a point, where he had had enough of witnessing death and destruction and was fighting his inevitable regeneration in a frozen tundra. As he gritted his teeth and fought back he encountered none other than his original self, the First Doctor played by Doug Bradley.   That is what has led us to this year’s Christmas special “Twice Upon a Time”, both Time Lords fighting their own changes in Steven Moffat’s final script as show runner.

Our two versions of the same hero are still adapting to each other when a World War I officer finds himself in their presence being pursued by a glass alien, known as the Testimony who has deemed it necessary he dies. While not created using the most impressive of special effects (but come on this is Doctor Who after all) the Testimony

proves to be an interesting creature to be added to the Who mythos, an entity who extracts the knowledge from people seconds before their death to create a permanent record of the person. This is a interesting idea I hope we see more of. Joining the Doctors on their adventure is the returning Bill Potts who is always a joy, in the single year of her time as a companion she made a huge impression on the show so it is always good to see her pop up.

This particular special gets fairly heavy as it centers around three characters all coming to terms with their inevitable ends in some way or another. The Twelfth Doctor is refusing to regenerate again, First Doctor fighting off his first ever regeneration, and the officer in their midst is dealing with the fact that he is marked to die as soon as he returns to his time line. There are no true “bad guys” in this episode as the conflict is something larger than that. Of course in true Doctor Who fashion, our Time Lord uses his brilliance and passion to figure out a solution to everyone’s problems, set to the backdrop to one of the most poignant moments of the First World War, in a scene that is bound to get viewers choked up. Of course with this being a regeneration episode we know the inevitable is going to happen and Peter Capaldi makes the most of his final scene in this iconic role. During his tenure as showrunner Steven Moffat proved his ability to write gripping speeches and monologues for the Doctor to deliver, and this proves to be no exception. As he begins to burn with energy, Capaldi tells his incoming successor the responsibilities she has to; “laugh hard, run fast” and most importantly to “be kind”. This special shows us just how much the actor has evolved during his time on the show; from the sarcastic and cynical father figure, into a more warm and caring character without most of us even noticing. We are then introduced to the incredibly 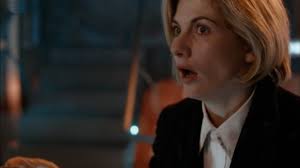 talented Jodie Whitaker who will be taking the controls of the TARDIS over next season. They say a first impression is everything, and she makes the most of hers. Uttering “aw, brilliant” and then accidentally pressing the button which blows up the TARDIS an throws her out, is the most Doctor-ish way possible to introduce this new incarnation. With a great cliffhanger of an ending, my anticipation is high for Whittaker’s era as the Time Lord.

One thought on “Review – Doctor Who ‘Twice Upon a Time’”