Movie Review: When We First Met

Plot: A guy has the chance to go back in time and change the past so the girl of his dreams never puts him in the friend zone

The romantic comedy subgenre has been on the chopping block for a long time. Usually, it is about some dorky guy trying to prove himself to a gorgeous woman. Or trying to out-douche the boyfriend who got to her first. Or breaking up a perfectly sincere relationship just to have his own fantasy version of the same relationship. When We First Met has the distinct displeasure of being all at once.

It stars one-third of the “Workaholics,” Adam Devine, as Noah, a jazz pianist who dropped out of business school when he found his true passion. As much as I like “Workaholics,” Devine is already living up to late period Eddie Murphy, Jim Carey, and Adam Sandler. We can all remember a time when those three guys would drop their more flamboyant schtick between punchlines just to be a regular dude. Devine doesn’t do that. It’s all intermittent yelling and plastic face expressions.

He is obsessed with his best friend, Avery (Daddario), and he is mistaking that obsession with romantic love. She never game him a chance and instead got engaged to Ethan (Amell), the man she met the day after she met Noah. When he accidentally time travels using the photobooth that both he and Avery used that first night, he thinks he has the opportunity to set everything right and stay out of the friendzone in the first place.

Thus begins every iteration of the romantic comedy except the one that is either romantic or comedic, let alone both. It pings pong from those rom-com wannabe first nights back to the present where Noah has to deal with the ramifications. Which means this is less Groundhog Day, like everyone is saying, and more like Butterfly Effect. This gives the movie the opportunity to dump on rom-coms, which it sort of does for awhile. That means its ultimate resolution should be to go back and let things just happen the way they already did, but that’s not how it ends. 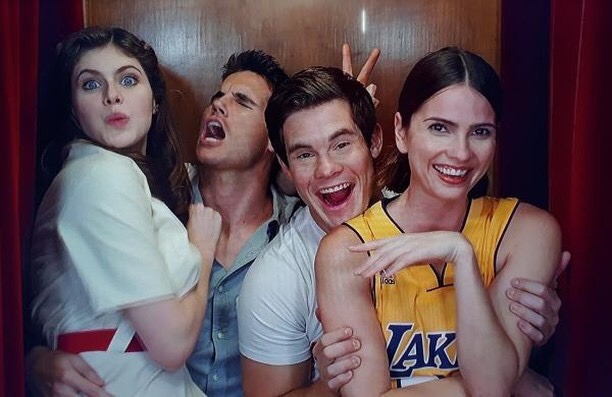 It ends with Noah realizing he didn’t miss his chance with Avery, he missed his chance with her best friend, Carrie (played by Shelley Hennig), the classic rom-com trope where he missed the just as attractive woman we are led to believe is boring looking enough to disappear next to the original attractive woman (I do not have the agility for the size of the eye-roll in my soul having to write that sentence).

When We First Met is not funny or romantic. It is a lazy retread of all the tropes that have led to the specific death of the rom-com and essentially ruins a cool premise that could have subverted the genre for the better. I’m starting to wonder if we ever had an actually funny love story before.

She didn’t put you in the friendzone. You put her in the girlfriend zone. Grow up!

One thought on “Movie Review: When We First Met”