Unknown to many, 2018 happens to be the twentieth anniversary of a line of comics that was not expected to do much besides bring Marvel a little extra money when they needed it. Instead the publishing line known as Marvel Knights, forever changed comics as a whole with a legacy which remains to this day. The powers at the House of Ideas leased out four of their lowest-selling titles to a third party which would lead to a drastically different company two decades down the road. In 1998, the comic collector bubble burst and Marvel, the once dominate comic publisher was forced to file for bankruptcy and scramble for ways to save themselves financially. In 1998, they reached out to artists Joe Quesada and Jimmy Palmiotti of the small publisher, Event Comics with an idea. Marvel would lease out titles to the two of them with the idea being that as outsiders they would bring new life to them and attract buzz-worthy talent to work on the books. Naturally Marvel was not going to take the risk with big name characters like the X-Men or Spider-Man, so Quesada and Palmiotti were given; Black Panther, Inhumans, the Punisher, and the book that became the crown jewel Daredevil.

The strategy Quesada and Palmiotti decided to employ was the first and foremost liberate these titles from being bogged down in continuity. These characters were now

operating in their own titles away from outside interference. Since the books they were publishing were among the lowest sellers, they saw this as a green light to encourage creators to not hold back and to take risks. This paid off handsomely, because it not only provided great content, but the creative freedom attracted a lot of talented writers and artists. Milestone Media co-founder Christopher Priest took over Black Panther leading to one of the most famed runs in Marvel history. Former Hellblazer writer Paul Jenkins along with superstar artist Jae Lee took on the royal family of Attilan in Inhumans with an award winning 12 issue run.  Tom Sniegoski and Christopher Golden made the controversial decision to give the Punisher a supernatural horror style, which failed in the long run, but featured art from the legendary Bernie Wrightson. Later this series was saved by bringing onboard Garth Ennis for a stint on Frank Castle that is still revered. The biggest talent recruitment made to the Marvel Knights line was drawing acclaimed indie filmmaker, Kevin Smith to take on the writing reigns of Daredevil. Given that this was his first comic writing experience, Quesada and Palmiotti pulled art duties on the book to usher him along.

The books with the Marvel Knights banner consistently met with praise from the comic community and the number of books they published grew. Their books had a darker and 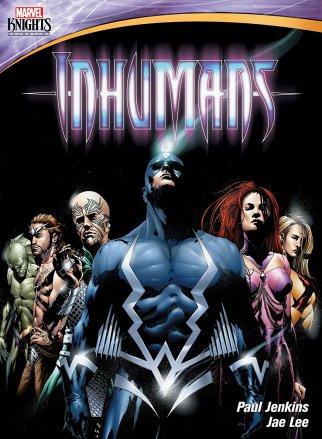 often more street level edge with more focus on character than the traditional Marvel fare. Thanks to artists from outside the mainstream of comics, these books also had a look and visual aesthetic unlike other comics on the stands. Given the success of Marvel Knights, Joe Quesada was given the job of Marvel Editor-in-Chief in 2000. He was now free take his vision across the Marvel line as a whole. This move also brought the characters under the Marvel Knights into more contact with the rest of the Marvel Universe. Through the 2000’s this line continued to grow as books like; Captain America, Wolverine, and the Incredible Hulk were brought into the fold. They continued to produce quality books and introduce new talent to mainstream audiences. Most notably was writer Brian Michael Bendis who took over Daredevil and along with Alex Maleev had a storied multi-year run which established him as a top talent in the industry.

Inevitably with Quesada running the entire line of comics, more and more books saw their “Marvel Knights” banner fade away from the cover. Eventually the decree was passed that Marvel Knights would now only publish prestige mini-series and no longer

have any ongoing books. Despite this change the line continued to put out acclaimed books like Fury: Peacemaker from Garth Ennis and Darick Roberston as well as Silver Surfer: Requiem from J. Michael Straczynski and Esad Ribic. This concept carried things for a while but by the 2010’s Marvel Knights had faded away.

As mentioned before, this line of comics changed the medium and left a powerful legacy. The success of Marvel Knights propelled Quesada to the EIC position at Marvel, and currently he serves as Chief Creative Officer for one of the strongest brands in the world. His creativity saw Marvel pulled away from the brink of financial ruin and set them on the path to be the entertainment juggernaut they are today. Many of the writers and artists who were introduced to the mainstream on Marvel Knights books, continue to be major players in the industry: Brian Michael Bendis, David Mack, Amanda Conner, and Garth Ennis are just a few of them. The reach of this line extends beyond the comic shop as well, as its influence can be clearly seen on the grittier more realistic Marvel shows currently finding success on Netflix. In fact one of the books published during this time was titled Marvel Knights and featured Daredevil leading a team of street-level heroes. Though Marvel Knights is no longer around it has never been officially cancelled, and while it is doubtful to be resurrected any time soon, I am sure it can be called upon if ever needed.