Plot: Having gotten his revenge on Francis and rescued Vanessa, Wade Wilson is lacking for purpose. He crosses paths with a young mutant, Russell, who is being targeted by a time travelling cyborg mercenary.

Second, I’m a huge X-Men nerd. I’ve read roughly 80% of all X-Comics ever published and am working through the remaining issues. This is relevant because this is a very much a movie for X-Men fans. Not because they pay a lot of attention to the details or pad out the fan service, but because they fill the movies with things X-Fans will laugh at and add endless Easter Eggs. Check out the ad for Canadian airline ‘Alpha Flight’ on Dopinder’s cab. Good stuff.

Anyway…and spoilers…when I was on the way to this movie I thought to myself that I’d be really disappointed if they start with another slow-motion carnage intro sequence. It would suggest that this is another weak sequel rehashing the original. Any Deadpool project has to walk the line between ridiculously funny and ridiculously cringe inducing. After a James Bond inspired introduction (with the funny in-joke titles, that’s still cool) complete with an original song by Celine Dion it was clear that they knew what they were doing. 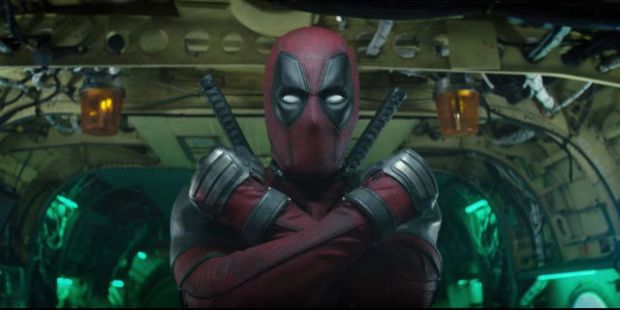 Wade needs a purpose in life and when he fails to fit in the X-Men he decides that he can prove his worth protecting Russell Collins (that kid from Hunt For the Wilderpeople) from Cable (Brolin). Collins has taken on the handle ‘Firefist’, a name his comic counterpoint only used on one page in one issue about 35-40 years ago, and is on the verge of following a dark path. Cable comes a dark future where he lost his family and is determined to kill Collins before he turns evil. In order to battle this grim new foe Deadpool puts together his own X-Force featuring Bedlam, The Vanisher, Shatterstar, Zeitgeist and Peter.

Ryan Reynolds is Deadpool. As we said earlier it would be easy for these movies to be awkward but he’s such a perfect fit for the role and delivers such a passionate performance that he still carries the movie. Everyone else fits into his world extremely well and serve to supplement the madness. Josh Brolin, seemingly determined to murder every comic character he can this month, nails the role of Cable, bringing the ragged, stern no-nonsense character to life in a way that all but the most pedantic will be happy with. They’ve made a clear decision to ditch the complicated nonsense of his parentage and family tree (it cannot be mapped out on a 2D page), techno-viruses, telekineses, alternate timelines and things that would distract from Cable being a hard-ass.

As to the rest of the recruits, Domino is on point and the most fun character aside from the lead. Zazie Beetz is immediately charismatic and the imaginative way of demonstrating her luck based powers is something we definitely wanted to see more of. Think Final Destination. Terry Crews and Bill Skarsgård are plenty of laughs adding their own personal stamp onto a pair of lesser known X-Men. Plus there’s Lewis Tan as classic 1990s ‘X-Force’ Rob Leifeld creation Shatterstar. As a long term reader I was beyond thrilled with what they did with this character. Absolutely perfect.

If I was to level a complaint against the film it’s the comedic routine being somewhat predictable. They work so hard to do the unexpected in every scene that the unexpected becomes expected. It’s great that they gave Deadpool some actual character development instead of leaning into shock tactics or pop-culture references.

Although we did post a spoiler warning we haven’t discussed any major ones. We were very excited to see a major X-Men character turn up in an unannounced role and done right for a change. That was neat.

If you liked the first one you’ll like the second one.

One thought on “Movie Review: ‘Deadpool 2’”