Every now and then I get a notion in my head to smash through an entire franchise of movies. In the past we’ve covered the Fast and Furious, Saw and MCU films. Recently I was reminded of the series that was Saw before we had Saw, the Rube-Goldberg gore-fest Final Destination. Unlike Saw I’m going into this having already seen all the films, but the details have been lost to the fog of memory. So let’s go back to when Sean William Scott was a hot, new talent.

Plot: Shortly before taking off for a class trip to Paris, Alex suffers a disturbingly realistic vision of the plane exploding on departure. His panic leads to a small group of his classmates and a teacher being removed from the plane shortly before his vision comes true. In the weeks that follow each of the survivors fall victim to unusual accidents.

Review: Like with every horror franchise which drove it’s premise into the ground through increasingly silly behaviour, the original idea is pretty unique and interesting. Initially written as a spec script for The X-Files whilst the show was at its peak. In short, the villain is the very concept of Death itself, who has a complex plan for everyone’s demise. When Alex (Sawa) experiences a prophetic vision of his future he is able to avoid the event, which pisses Death right off. As a result, Death is out to kill by orchestrating deadly accidents to return the status quo.

Much of the original film is spent explaining this set-up without making it sound silly, which they manage to do pretty well (even if they have to drop in a Tony Todd cameo to fill in the gaps). We follow the characters on their journey of discovery with plenty of people casting doubt on the idea until either shown proof or the coincidences stack up. Death is picking them off one by one in the order they should have died, and his Death’s OCD forces him to finish the order and loop back around later if they somehow avoid his ‘attack’. It’s contrived, but it provides a simple but effective structure to build the story around.

What’s odd if the way Death sometimes…but not always…makes a point of covering his tracks. When Alex’s friend Tod (Donella) slips on the wet bathroom floor and gets strangled by a clothes line, Death causes the water to retract back to its source. This kind of cover up doesn’t really occur again. For some reason Death really wanted this one to look like a suicide, leading to suspicion to fall on to Alex. Why would Death care? The end result is the same.

Anyway, Alex and his confusingly named love interest “Clear River” (Larter) convince the other survivors of Death’s ‘grand design’, helped by three survivors already dying under unusual circumstances. Meathead jock Carter (Smith) and twitchy oddball Billy (Scott) join them to try and avoid their elaborate and gruesome deaths, but Death proves more and more savvy with a final scene indicating that they never escape this curse.

What really helps the film along is some decent casting. Devon Sawa has not had a long or illustrious career…possibly because he’s pretty grating and that he embodies early 2000s fashion…but he genuinely tries to sell it. Ali Larter is better as “Clear”, and both her and Sean William Scott are playing against type. The characters are hardly complex, but they are relatable and largely believable.

The concept holds up, as does the execution. What makes this is a weaker entry in hindsight is the simplicity of the deaths and so much time spent setting up the idea of Death playing some elaborate long con. If you haven’t seen it, or haven’t seen it in 15 years, it’s a damn sight better than much of the horror movies out in 2018.

Best/Most Insane Death: It’s quick and simple, but Sean Williams Scott having the top two thirds of his head neatly sliced off by a chunk of flying metal launched by a passing train is a great moment. 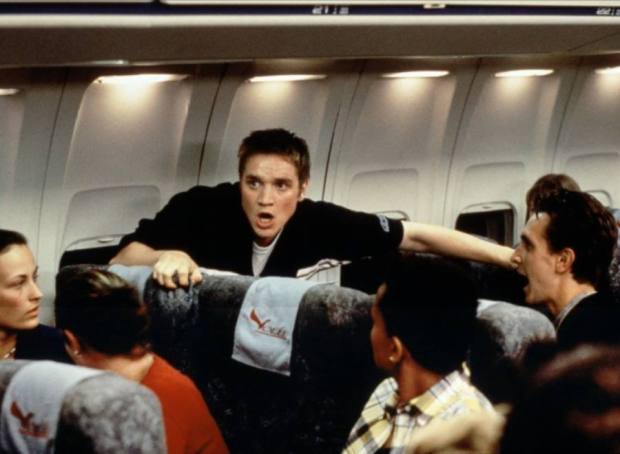