Plot: In the near future all human children begin dying or developing super powers. The government rounds up all the powered children to work in labor camps. Ruby Daly, an ‘Orange’, escapes the camps and goes on the run with a group of other escapees.

Review: Coming in at the tail end of the YA dystopian novel adaptation fad, The Darkest Minds mixes things up by adding a superhero element to proceedings. So this story takes the best parts of superhero movies and the best parts of YA dystopian movies and locks them in a safe and drops them in the middle of the ocean. Then they made The Darkest Minds with whatever was left. 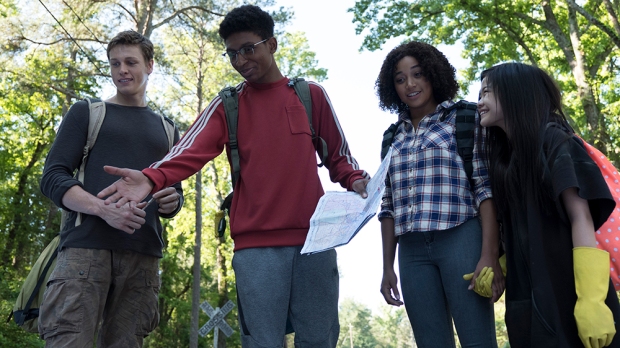 The key to any good story of this ilk is world building. I have so many questions about this world. Why has the economy collapsed with no children around? Can people still have children? A new children effected by this condition? How were all the children rounded up? Did no-one object? If the most common power hyper-intelligence (or ‘Greens’ as the movie calls it), why are they in labor camps? I’d have thought there was better things to do with a new population with advanced super intelligence. Like find a cure for their condition. There’s also people who can generate electricity (‘Golds’) and move things with their minds (‘Blues’) who could provide societal and economical benefits. They keep talking about a resistance group called ‘The League’, who are clearly important to what is undoubtably a trilogy but we learn next to nothing about it. We only see them at the end.

Anyway, to the story. Out of nowhere the world’s (or just the USA? I guess that was never clear either) children all start dying or getting superpowers. All the children get rounded up and classified by colour based on their powers. Oranges and Reds (why though? are they inherently evil?) are terminated upon identification while others do hard labor. Although an Orange, Ruby hides her powers to pass for a Green and manages to maintain this for six years. When she’s uncovered by a White Noise test that detects Oranges (which they’re using for the first time, I guess?). A doctor who is a member of a resistance group gets Ruby out before she’s terminated. Ruby escapes from the doctor and joins a group of runaways (who she suddenly trusts more than the people who helped her?) and together they travel to a different resistance camp run by children.

The real thrust of the story is actually the romantic plot between Ruby and Liam, one of the runaways. In spite of the actors being talented and charming, there’s no getting past the mawkishness of these scenes. It boils down to them exchanging awkward dialogue or mooning over each other and it really drags.

Much of their conflict comes from Liam wanting to stay away from The League because they think he’s a killer. And yeah, he does kill some enemy soldiers in self defence. But if he’s a killer to be shunned, Ruby is pure psychopath. During a battle with the main antagonist she mind controls a helicopter pilot and casually makes him crash his helicopter into the ground. She forces this guy to kill himself AND his co-pilot who we see panicking and pleading with him. But this is nothing compared to what she does to Brieanne of Tarth, who plays a bounty hunter. After being ambushed Ruby using her powers to force Brienne to walk non-stop through an isolated forest until she dies. Is there nothing else the sympathetic child protaganist could think of? Like sending her home? Making her give up bounty hunting and learn to paint? Nope, condemn her to days of pain and torture until her heart gives out or she dies of thirst.

This is a visually competent film with good sound design and a talented, mostly young cast. It even has Bradley Whitford as the president if you want to pretend it’s a bonkers sequel to The West Wing. The story is a complete mess and drags the rest of the film down with it. It’s biggest crime, however, is that it’s kinda dull.

I’ll give it some credit though…it’s a rare modern film that doesn’t have spoilers in the credit. It put them on the poster. Seriously, that’s the big finale on the poster.

← A Decade Later Christopher Nolan’s ‘The Dark Knight’ Remains A Peerless Piece of Cinema Gold
Book Review and Casting Call: ‘One of Us is Lying’ (2017) →