In this Retro Review I am looking at another cult classic of the video era. The 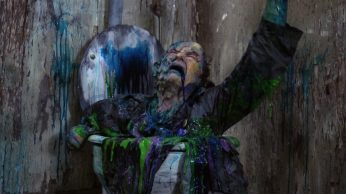 screenwriter behind this film proudly claimed he wanted a movie which would have something for every person to find something offensive about. And while the 1987 movie Street Trash lacks a coherent narrative, it lives up to that writer’s goal. This darkly comedic horror flick is packed with weird and disturbing imagery unlike anything else seen onscreen. If you doubt me, keep in mind the movie opens with a man farting in the face of a homeless guy and it only gets stranger from there.

Street Trash offers viewers multiple narratives that are somewhat tied together but none really go anywhere near a satisfying conclusion. We begin with Fred a homeless guy who lives in the junkyard with his brother Kevin whom he is trying to reconnect with. Also calling this junkyard home is the murderous Bronson, the characters soeak in fearful tones of his backstory as a drug dealing hit man in Vietnam, and he is always 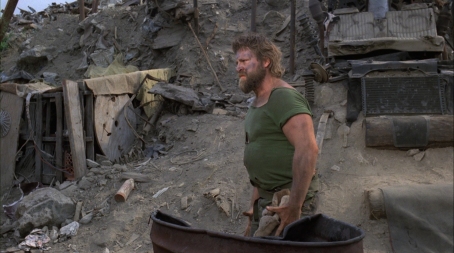 wielding a knife fashioned from a human bone. He rules over the homeless in this scrapyard like an apocalyptic warlord and has no problem venturing outside his domain to bash a guy’s head through a windshield simply because he is in a bad mood. A thorn in the side of this community is Bill the Cop, the hardass cop (well they call him a cop but he never has a badge or uniform or anything else to denote his law enforcement status), he is waging a one man crusade to bring down a local Mafioso. In the center of it all is a sixty year old brand of alcohol the owner of the local liquor store found in the basement. It is called Viper, and sold for a dollar a pop to the dregs of society; but upon drinking it they melt into a pool of brightly colored human sludge.

As mentioned before, the plot is a confusing mess of characters, though some of these characters like Bill the Cop and Bronson are very fun in a cheesy macho way. What exists of a story is merely there to usher the viewer through a collection of fun and disgusting scenes. At one point a scene which begins tense as Bronson threatens Fred, ends with a lighthearted game of keep-away with the severed piece of a man’s anatomy (you can guess what piece, but this is mostly a family friendly site). Of course the centerpiece is

the sight of the first guy to down a bottle of Viper, who melts away into a puddle of blue goo down a toilet, yet he maintains a human-like face. The whole scene is absolutely glorious for fans of old school body horror.  The make-up fx were done by Mike Lackey who also played Fred, and the deficiencies in his acting are more than made up for in his skill in this field. Sitting in the director’s chair is J. Michael Muro, while Street Trash is the only film he would direct he is an award-winning veteran cameraman who has worked on films like; Dances with Wolves, Titanic, Heat, L.A. Confidential, and numerous other iconic movies. So while he does not break down the plot into any understandable way, he is able to make every shot look fantastic.

The movie Street Trash is an all you can eat buffet of depravity, violence, and strangeness which has led to it being quite controversial. But like any flick famous for being divisive it has built up a solid cult following, including horror luminaries like George A. Romero and Tom Savini. If you are looking for a completely mad body horror flick with a good dose of camp, Street Trash is a movie well worth seeking out.

← Is The Oscar Category For Popular Film Really That Bad Of An Idea?
Sorting Disney Heroines into Hogwarts Houses →