Many cinephiles have griped about it and studios do nothing about it feeling this is the best way to promote their movies. Of course I am talking about movie posters and Blu-Ray covers. In the days of the local video store, movies had to fight for your attention and did so by showcasing shocking artwork on the cover of their VHS. This is a far cry from the bland photoshopped images we tend to get nowadays. As many of you know, the best VHS covers were always the horror movies with gruesome and disturbing images which lured in impressionable youths like a sirens call. In what I hope to be the first of many articles about this, let us look at some of the great VHS artwork from a time gone by.

The Slayer: An artist suffering from nightmares, and her family and friends are stranded by a hurricane on an island off the coast of Georgia. The abandoned derelict town they are confined to on the island is the same one from Kay’s nightmares and expectedly people begin dying in violent and entertaining ways. Kay begins to doubt her own sanity, believing she may be murdering her loved ones while in her sleep, but a twist at the end hints at something more supernatural. The Slayer has a reputation for being a more artistic and thoughtful horror film from the video era, so naturally the image we see does not indicate that at all. In the foreground the characters seem anxious and scared, and they have every right to be because looming large is their friend Kay in the clutches of a ghoulish creature. It should go without saying the main draw to this artwork is the monster terrorizing the film’s protagonist. 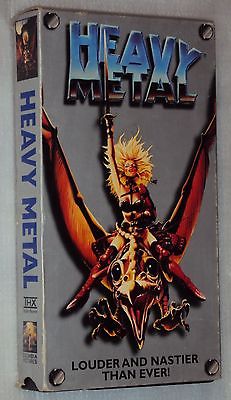 Heavy Metal: One of all-time great animated films, which still enjoys a large cult following to this day. Based on the comic magazine of the same name, Heavy Metal encapsulated everything cool about 80’s counter-culture art. Heavy Metal is an anthology of stories, each with their own flavor, but all very enjoyable. But how do you express; high fantasy, gratuitous sex, violence, and a kick-ass soundtrack in a single image? My guess is the one we got manages to do that as best as any single picture could. The metallic trim is eye-catching in of itself but it’s the warrior Taarna hoisting her sword into the air which makes people pause and take stock of the pure badassedness before them. Simple and direct this image is iconic for a good reason.

The Video Dead: A supernaturally powered TV causes zombies to escape the old movie which imprisoned them, and brings them into the real world to terrify one house in particular. Despite the ridiculous amount of weaknesses these particular zombies have the poster to this direct-to-video flick makes you believe they are a force to be reckoned with. The undead creature tearing through a TV surrounded by bolts of electricity is bound to catch the attention of any self-respecting horror fan. Just looking at this you know good or bad, the Video Dead is going to be very entertaining.

The Stuff: I grew up about 15 minutes away from Midland, Georgia so I can safely say there is no factory making white goop which turns you into a zombie. There is a Wal-Mart though, and that can be pretty scary. Directed by horror legend Larry Cohen, the Stuff is a sharp satire on 80’s consumerism, the white creamy food drives a national craze and everyone is raving about this new snack. Of course it is too good to be true and the Stuff is actually a mutant organism which turns people who gorge on it into zombies before finally consuming their insides. The main promotional image for this flick is nothing short of perfection. Simply advertising the Stuff right there in bold green letters drives people to wonder what this stuff is, they can tell from the poor man on the cover it can’t be anything good. His face is contorted in an inhuman way as the stuff pours out of his eyes and mouth.  This is the perfect example of the artwork grabbing the attention of potential viewers by being shocking and still giving a mystery. 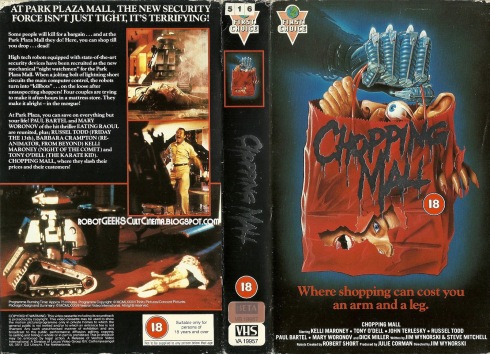 Chopping Mall: There was a time when slashers could show up ANYWHERE. Summer camps, slumber parties, even the holidays were not safe from a mad man with a sharp object. Naturally when going to the mall during this age you were bound to encounter blood and carnage. Though the villains in this flick were robots and not humans/supernatural beings, they still had no problem trying to rack up a body count. Since anyone rarely goes to a mall nowadays (unless they want to commit some petty crime) the artwork used on the video cover is reminiscent of the institution known as the mall. The cybernetic arm carrying a torn shopping bag with a head in it and that tagline are bound to draw a chuckle and the attention of anyone looking for something to rent.